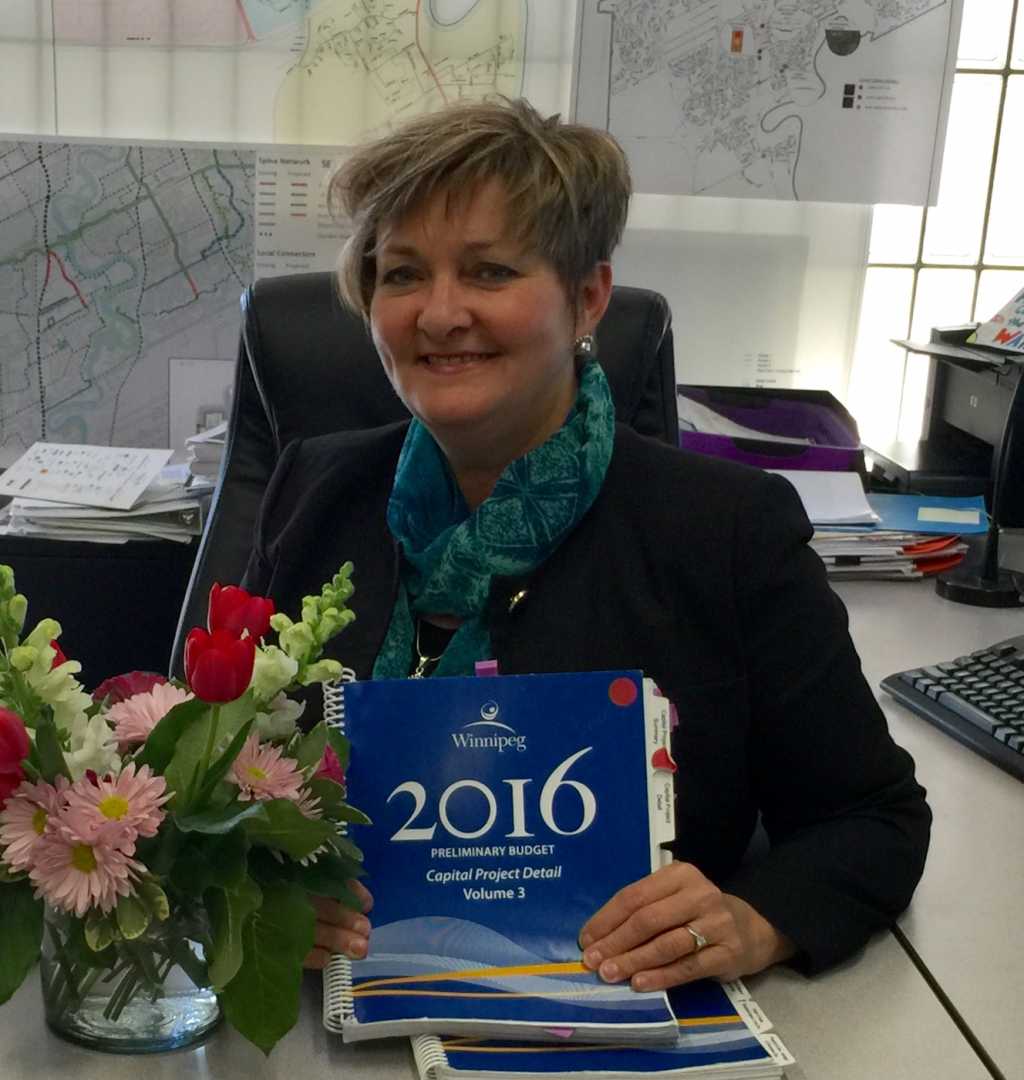 I am providing an update on how the City of Winnipeg’s 2016 Approved Budget impacts residents in the South Winnipeg–St. Norbert Ward. This is a high level summary presented in the context of the specific ward priorities I am focusing on.  For detailed updates on each priority, please see Ward Priorities

The average Winnipeg homeowner will see an increase of approximately $185 on their tax bill*, calculated as follows:

*Includes increases to budgets of both the Winnipeg Police Service and the Fire & Paramedics departments.

Many of these age-friendly initiatives benefit the entire city, with some having a focused impact in our ward:

An extensive list of initiatives are occurring at Brady this year.  For details, please SEE HERE

The City of Winnipeg will be investing $100,000 towards repairing the Bridgwater Forest Fountain and repairing surrounding landscaping (pathways). Manitoba Housing and Renewal Corporation will also be investing funding towards the fountain’s repair.

Once repairs start in 2016, the City will then have a better idea when the fountain will actually be up and running.  I think a little community celebration will be in order!

Many of these communication initiatives benefit the entire City, with some having a focused impact in our ward:

Rental Housing around University of Manitoba

There is positive movement in the 2016, 2017 and 2020 budgets on the South Winnipeg Recreation Complex.

This library is anticipated to be part of the South Winnipeg Recreation Complex:

A significant investment in transit was made in the City’s 2016 Budget – but there are also some significant challenges Winnipeg Transit is facing. I have prepared a detailed overview to help you understand the funding and challenges:  SEE HERE

I encourage residents to VIEW THE VIDEO of the presentation by Mr. Dave Wardrop, Director of Winnipeg Transit, on the 2016 Capital Budget.  Mr. Wardrop begins his presentation about 20 minutes into the video, and speaks for about 1.5 hours. This discussion, held with the Standing Policy Committee of Infrastructure Renewal and Public works, provides an excellent overview of the emission control challenges faced by Winnipeg Transit.

THANK YOU FOR YOUR SUPPORT

I want to extend a HUGE thank you to Mr. David G. Sanders, Chair of the Bridgwater Lakes Neighbourhood Association, for preparing such a detailed presentation and for giving up two mornings (7+ hours)  to present to Winnipeg’s City Councillors.  I encourage all Bridgwater residents to review David’s very informative presentation on the need for transit in Bridgwater Lakes.

The decision made by City Council was not to immediately add new bus routes in 2016, due to ongoing maintenance issues and the need for fleet stability.

BUT on a positive front (and again, SEE HERE for a detailed overview of Transit):

So, in summary, I am optimistic that we may get the expansion for 2016  – but there are many variables to monitor over the coming months.   I recognize this is extremely frustrating, and have provided you with a volume of information to help explain the situation.  Globally, the transit industry is in a period of transition. Diesel buses are old technologies with stringent Federally mandated controls that make them complicated and fragile. But at the same time, the technology of electric and hydrogen is still in early stages of development and has not yet reached a ‘fleet level’ of reliability and cost effectiveness. I could compare this to how CD’s have faded away, small drugstores have evolved into super drugstores, and the current situation with taxis and Uber.

A new Handi-Transit Scheduling System valued at approx. $1.5 million is included the 2016 budget.  This will update Handi-Transit’s scheduling system so it can maintain basic and medical client information, schedule clients according to specialized needs, optimize available resources, communicate with drivers and clients in real-time, and allow for immediate scheduling or dispatching when hourly cancellations create an inefficient use of available resources.

This year’s budget is providing record spending for upgrading our roads, bridges and active transportation infrastructure. Complete details of regional roads can be found in 2016 Budget Volume 3,  Pages 2-18 and 2-47.

Specific to the South Winnipeg – St. Norbert ward, these projects are planned: