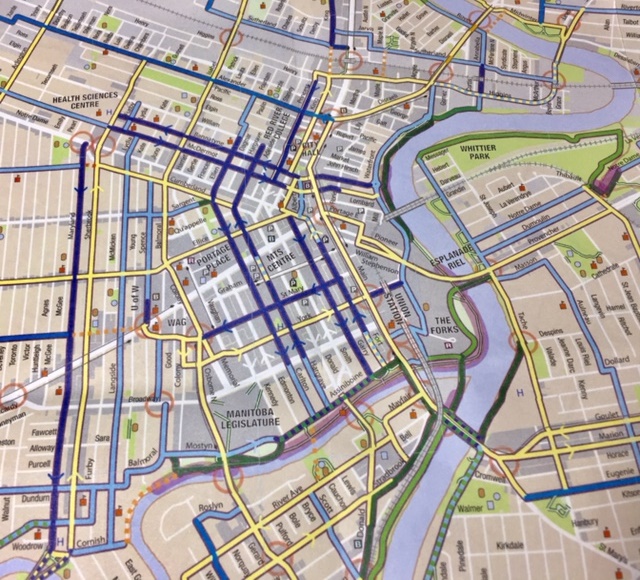 I was very pleased to bring forward this Motion regarding a downtown grid of adjustable bike lanes at the meeting of the Riel Community Committee on November 7, 2016.  As the next step,  this matter will be forwarded for further consideration to the November 29th meeting of the Standing Policy Committee on Infrastructure Renewal and Public Works (IRPW).

I will be registered to speak to the IRPW Committee in support of the motion. If you would also like to register to speak in support at the November 29th meeting, please contact the City Clerk:  dwatt@winnipeg.ca

WHEREAS the City is already working on expanding and supporting the downtown bicycle network by coordinating new cycling facility construction with other infrastructure renewal projects –such as those Council approved the 2016 Pedestrian and Cycling Action plan, which included a study for protected bike lane upgrades on McDermott Avenue and Bannatyne Avenue between Sherbrook Street and Waterfront Drive;

AND WHEREAS the Public Service has successfully engaged a large number of relevant stakeholders in downtown as part of the Downtown Bike Lane System study and the knowledge gained can be used to leverage positive support from those stakeholders towards the planning and implementation of new cycling facilities in downtown;

AND WHEREAS through the development of the 2016 Pedestrian and Cycling Action plan, extensive consultations have identified routes for the Downtown Bike Lane System;

THEREFORE BE IT RESOLVED that the Standing Policy Committee on Infrastructure Renewal and Public Works request the Winnipeg Public Service to report back in 60 days with a proposed plan that would show necessary steps associated with the implementation of a downtown grid of adjustable bicycle lanes before the end of 2018; those steps should include a proposed public engagement plan, a proposed preliminary set of streets for consideration, and a proposed source of funding under the current budget forecast.

Wheels are in motion for fast-tracked bike grid in Winnipeg

Counc. Janice Lukes is continuing to push for Winnipeg to play catch-up with its Western neighbours by installing a minimum grid of bike lanes downtown

Coun. Janice Lukes put rubber to the road on a fast-tracked downtown bike grid this week.

After a well-attended forum proved there’s interest in speeding up the cycling network, Lukes drummed up a pitch for a “downtown grid of adjustable bicycle lanes before the end of 2018.” She presented it to the Riel community committee on Monday.

The motion has been forwarded to the infrastructure renewal and public works (IRPW) committee for further consideration at its Nov. 29 meeting.

“What the motion I’ve put forward is asking is for is the department to go away to figure out what it would take… what would we have to do, what would public engagement look like, which streets would it go on, where are we going to get funding,” Lukes said. “They’d come back with that (within 60 days) and then we’ll have to decide as a council how to proceed.”

She explained how rolling out protected cycling lanes with minimal, adjustable materials would be an affordable way of bolstering the city’s existing active transportation (AT) infrastructure in a timely, low-risk way that was already proven in Calgary and Edmonton.

“Calgary’s was temporary too, they’re building it in more now that it’s been successful… Edmonton is the same story, they’re doing consultation while it’s in, even more condensed,” she said.

But because extensive consultation was already done in Winnipeg to identify routes during the development of the council-approved pedestrian and cycling action plan, Lukes is confident a lot of the work is already done.

“We spent more than a year and a half studying cycling pedestrian strategies… we know what streets we want to put things on, years of study (are applicable) to this,” she said, noting this proposal would only fast-track “the arteries,” or bare-minimum for a complete network that could be built-up gradually in the coming years.

Not to rush the process, Lukes wants city staff to update stakeholders, businesses and the community with a “rigorous” public engagement plan before going any further.

Still, the idea is to expedite the process of bike-lane installation with pop-up infrastructure to prove the “build it and they will come” idea and transform downtown in the process, hence the 2018 deadline.

On her side is a vocal bike community and its champion, advocacy group Bike Winnipeg, as well as a federal government moving into the second year of its mandate that may have AT funding to offer municipalities with a shovel-ready plan.

Lukes wants this to be shovel-ready if federal funding opens up.

The biggest barrier she identifies is political will among her council colleagues, which she said will only get swayed by “what the people actually say they want.”

She knows there’s demand, she’s seen it and heard it, but “if these people want this downtown network, the obligation is on them to tell their councillors.”

On her website, Lukes asked anyone who supports fast-tracking a gapless grid to register with the city clerk so they can speak at the Nov. 29 IRPW meeting in favour of the plan.

She admits it’s ambitious and knows it already has critics, but she also doesn’t see why other cities should get praise for taking bold progressive action in AT infrastructure while hers takes years to install even one downtown bike lane.

She wants Winnipeg to do better.

“The wheels are in motion,” Lukes said.