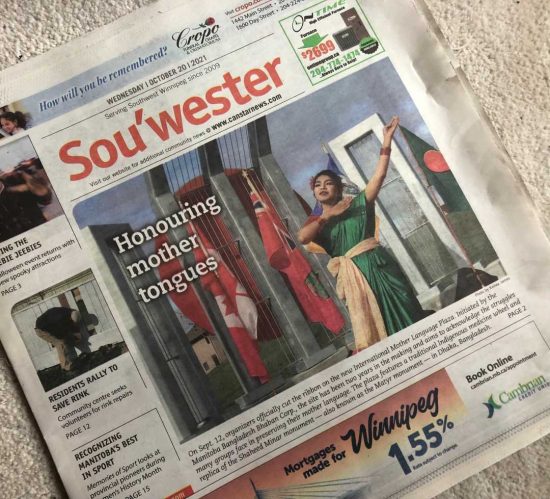 Front page of The Sou’wester! A wonderful addition to our community! Thanks to all involved!

Thank you to The Sou’wester for covering this important project!

On a crisp, fall afternoon, song, dance and a medley of dialects echoed through the air as a monument celebrating language and culture was unveiled at Kirkbridge Park.

On Sept. 12, organizers officially cut the ribbon on the International Mother Language Plaza, a gathering place and sculpture installation in the Richmond West neighbourhood.

The Plaza was initiated by Manitoba Bangladesh Bhaban Corp. two years ago and acknowledges the struggles many groups face when trying to preserve their mother language.

The plaza features a traditional Indigenous medicine wheel and replica of the Shaheed Minar monument — also known as the Matyr monument — in Dhaka, Bangladesh.

It’s a reminder of the Bengali language movement, which advocated for Bengali to be an official language of Pakistan.

On Feb. 21, 1952, student protesters were killed by police. Since then, the day has been known as International Mother Language Day.

Kwhaja Latif, president of the Manitoba Bangladesh Bhaban Corp., told the crowd he was “totally warmed” by the turnout before thanking everyone involved in the plaza’s creation.

“When we leave our countries and settle somewhere, we ultimately lose our language.” Latif said. “This place is for contemplation. A person that has lost their own language and culture ultimately makes them devoid of self-esteem and identity. They lose hope and connections.

Latif said the five sculptures in the plaza — four smaller ones and a large one — represent a mother and her children and show family is the centre of language.

To achieve the plaza’s design, organizers consulted with students and staff from Southeast Collegiate, a private high school that offers students from Manitoba First Nations communities housing and education based around their Indigenous culture.

“Language links our past history to our future. You have to know where you come from in order to move forward in life,” Southeast Collegiate principal Sheryl McCorrister said at the ceremony.

“With change comes opportunities, and those that are willing to move forward will take those opportunities and make the changes necessary to bring people together in the name of truth and reconciliation. By building this beautiful gathering place, change has taken place and moved us forward.”

After speeches from dignitaries involved in the plaza’s inception, there was traditional Bangladeshi dance and a presentation from Bairdmore Elementary School students, which included a song and greetings in the student’s own languages, such as Bengali, Cantonese, Punjabi, Kurmanji, Arabic and Oromo.

“Our language is part of our culture and our identity,” the Grade 6 students each told the crowd.