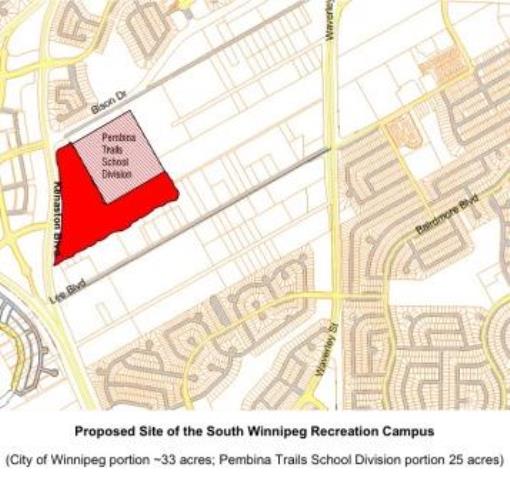 Positive, ongoing progress is occurring on this ‘complex’ Recreation Campus project.  I am very pleased to have secured funding for this exciting, new initiative in the 2017 budget process:

This is a very involved project in that land has to be assembled, services have to be put in (sewer, roads, drainage, etc.), partnerships have to be developed, and extensive coordination with all stakeholders has to occur. The City of Winnipeg has never undertaken a project like this, so processes and systems require change, and new working models have to be developed. It’s not often you have the opportunity to ‘start from scratch’ when developing a recreation facility! Over the last two years, good progress has occurred and we continue to move forward:

Development of a Project Charter

This is a desperately needed facility, and it is a top priority of mine to keep it moving forward!  For additional information, visit Ward Priorities: South Winnipeg Recreation Campus.  My thanks to Metro News for reporting on this story.

It’s an empty field now, but planning will soon ramp up for a development one councillor calls “something like we’ve never seen before in Winnipeg.”

Janice Lukes, is the area councillor for Waverley West, a massive suburb on the outskirts of the city. She hopes the neighbourhood will one day house a new regional recreational hub, complete with a community centre, sports fields, transit service, and library – and that’s just the beginning.

Dubbed the South Winnipeg recreation campus, the project is slated for a 33-acre parcel of land along Kenaston Boulevard, adjacent to the future site of two new schools.

Recently, the city began its search for a consultant to come up with a conceptual design for the first-of-its-kind project.

A report from 2015 estimated that, by 2020, the population of the seven neighbourhoods of Waverley West would swell to 40,000 – nearly the size of Brandon, Man.

“Everyone is very aware of the shortage of recreation facilities out here. Everyone out here is paying high taxes,” Lukes said.

For six months, the consultant will have to assess how the land could be serviced for water and sewer, and offer transportation options from transit park-and-rides, bus stations and parking.

They will also have to analyze the feasibility of building a wide range of indoor and outdoor amenities, from a senior’s centre and multiple arenas, to a swimming pool and spaces for a community kitchen and daycare.

Lukes said residents will have the chance to say what they want to see on the site in three open houses, with the first one anticipated for spring.

“It’s not often you get a big piece of land, a parcel of land, a clean slate to come up with something really innovative and creative,” she said.

As for the cost, the consultant will return with an estimate. That’s when Lukes says she will begin shopping the project around to the province and feds, as well as to organizations like the YMCA-YWCA Winnipeg, for funding and partnerships.

“Every single opportunity’s on the table,” she said, adding there will be capital campaign launched.

Because the intent is to design the campus for its facilities to be shared between the city, schools and different community groups, Lukes said taxpayers dollars will be saved in the long-run.

For him, paying for such an endeavor would be an ideal use of revenue raised from the newly-adopted growth fees policy,

“The reason why we need to have recreational facilities is due to the growth of Winnipeg in these areas,” Orlikow said.