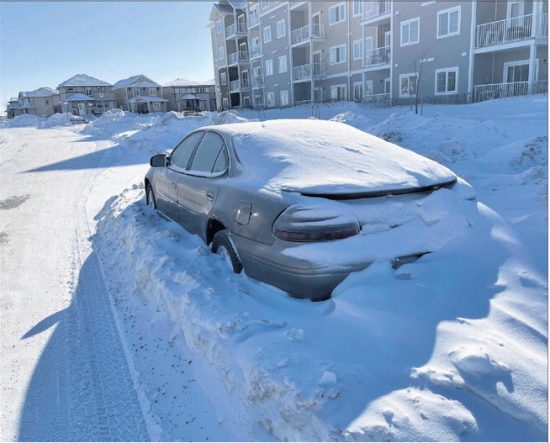 The Assiniboia Community Committee recommended to the Standing Policy Committee on Protection, Community Services and Parks that the Winnipeg Public Service be directed to report back on both the below motions within 90 days.

On March 8, 2022, the Standing Policy Committee on Infrastructure Renewal and Public Works concurred in the recommendation of the Assiniboia Community Committee and directed the Winnipeg Public Service to report back within 90 days on reducing the number of days a vehicle can remain parked on a street without moving in accordance with Section 65(1) of the Winnipeg Parking By law No. 86/2016, before it is taken into the custody of an enforcement officer.

I moved two motions to have the Public Service review the existing process and provide recommendations to speed up the removal of derelict and abandoned vehicles:

My office receives numerous complaints regarding derelict vehicles. Some residents store vehicles on driveways that are not operable. These vehicles have a negative impact on the neighbourhood, and can be areas for crime and infestations of rodents. With current bylaws, removing such vehicles involves a complicated process.

In addition, there are abandoned vehicles on streets that create safety hazards in winter conditions because snow cannot be efficiently removed from the streets – not to mention that public streets are not private parking lots. At times it can take up to a month to remove an abandoned vehicle from the street which creates many issues specially during winter and spring clean-up.

Thank you media for covering this important issue.

The City of Winnipeg could soon be asked to speed up its process in removing derelict and abandoned vehicles.

Coun. Janice Lukes has raised two motions that seek to lessen the criteria required before the city can relocate such vehicles, after receiving long-term complaints from residents.

“Sometimes, (people) put a valid licence plate and they let this hunk of junk sit on their driveway and it negatively impacts neighbourhood livability,” said Lukes (Waverley West). “It has to meet… three criteria (for the city to act) and (that) makes it very difficult (for residents) because it’s an eyesore.”

Abandoned vehicles that can block street spots for several weeks are also a major concern, claiming sometimes scarce parking slots, impeding traffic and getting in the way of snowplows, she said. “As neighbourhoods become more dense, parking on streets is reduced. We want (those spots) to actually be used for people to park there, not for people to store their vehicles there. Streets are not public parking lots… The streets are for everyone to use and should have regular turnover.”

On driveways, derelict vehicles can stay put much longer.

In the Fort Richmond neighbourhood, one appears to have sat in place for two years with four flat tires and its hood removed, Lukes said. Another in her Waverley West ward sports two flat tires, she added.

The councillor said at least two abandoned vehicles interfered with recent snowplowing in her area. (Vehicles can be towed under certain winter parking bans, which Lukes noted did allow removal of one of the autos.)

The councillor fears that in addition to being unsightly, derelict vehicles could also attract rodents.

Meanwhile, current rules create a complicated and slow process for the city to take action against those who opt to let broken-down vehicles decompose instead of properly discarding them, Lukes said.

“The poor (neighbours) — it’s so frustrating because they’re looking at these derelict vehicles and (it’s so difficult) to get rid of them.”

One of Lukes’s motions calls for a report on bylaw options that would “make it easier” to declare a vehicle derelict. The current process requires the vehicle to be: not in operating condition and rusted, wholly or partly wrecked/dismantled; not insured and lacking a current valid licence plate; and entirely or partially located outside a building for more than one month.

If all of those conditions are met, a bylaw enforcement officer can visit the site to take a photo of the vehicle.

Enforcement officials would visit a second time 31 days later, and potentially issue an order to remove the vehicle within another 30 days.

If the order isn’t complied with, the city can return to ticket and tow the vehicle to be impounded. In such cases, the owner would be expected to pay a fine of $400 for a corporation

or $200 for an individual, plus towing/vehicle storage costs.

Ideally, Lukes said she’d like to see the number of days the city waits to order a derelict vehicle be moved cut down to 10, with towing possible in another 15 days.

Her second motion calls for recommendations to reduce the number of days an abandoned vehicle can remain parked on a street without moving before it is “taken into the custody” of a parking enforcement officer.

Currently, that can’t occur unless the vehicle is either unregistered, wholly or partially wrecked/dismantled/ stripped, or appears to have not moved for at least 21 days. An enforcement officer must also leave a notice on the vehicle for at least 72 hours, warning it could be moved if the owner doesn’t do so.

After that point, a fine of up to $300 can be issued and the vehicle can be towed. Owners would again have to pay towing and storage costs.

Lukes wants that timeline to drop to 10 days without movement.

The motions will be debated at the Feb. 22 meeting of the Assiniboia community committee.

In an emailed statement, a city spokesperson did not directly answer if it appears reasonable to speed up the current process. The spokesperson noted any bylaw changes would require council approval.