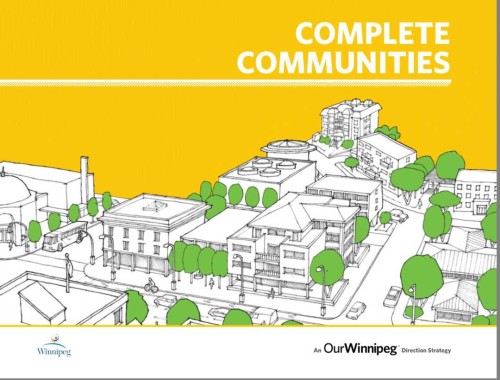 In 2009, the City of Winnipeg reached out to citizens to obtain their feedback in creating a long term plan for our community.  The City invested upwards of $3M to develop OurWinnipeg, a 25-year plan to guide our growth and physical, social, environmental, and economic development, as per The Winnipeg Charter.  This document also received Provincial approval.  Four direction strategies were developed to support the 25-year plan:

Copies of these documents can be downloaded HERE

OurWinnipeg  strategies, plans and policies were used to develop Waverley West (Neighbourhoods of Bridgwater and South Pointe). See the specific policies/strategies in the Complete Communities Report.  All of these communities were developed UNDER this vision.

Updating OurWinnipeg – Learning from Our Successes and Mistakes

Now, the City has begun reviewing and updating OurWinnipeg to prepare for the next 25 years of growth and development.  In recent discussion with City staff leading the review process – it came to my attention that there is NO plan in place to REVIEW, ANALYZE and LEARN from an existing community (Waverley West)  which was developed BASED ON the vision and strategies set out in OurWinnipeg?! !

While it is fine to reach out to citizens and ask their opinion on how they see their city evolving –  goodness – we should also look back on a community that was built following OurWinnipeg strategies to learn from our successes and mistakes!  I have made a formal Motion to do just that (see the Motion below).  This Motion will be presented on Tuesday, October 10, 2017 to the Standing Policy Committee on Property and Development, Heritage and Downtown Development.

Feedback from Residents in Waverley West

I have requested the City Planning Staff hold a special meeting with residents of Waverley West – residents who are living in Neighbourhoods of Bridgwater and South Pointe – to offer feedback on what it is like living, commuting, playing and working in a community that was developed under the OurWinnipeg vision. A date for this future consultation is in the process of being finalized.  You can also provide feedback on this process at: https://speakupwinnipeg.ca/

WHEREAS the City of Winnipeg has begun a process to review and update OurWinnipeg, which is intended to guide everything the City does providing a vision and policies that influence the delivery of City services, how we get around the city, and decisions about how the city grows.

AND WHEREAS the communities of Waverley West (Neighbourhoods of Bridgwater and SouthPointe) have been developed following the OurWinnipeg and Complete Communities policy documents that articulated the vision for the kind of city we want for our future, and supported a clear but flexible direction on how to achieve that direction,

AND WHEREAS the development of Waverley West (Neighbourhoods of Bridgwater and SouthPointe) is the largest community in Winnipeg that has been developed under the OurWinnipeg and Complete Communities visions and principles and is now approaching 12 years build out,

AND WHEREAS it is prudent for the City of Winnipeg to review and learn from the development of a community under the OurWinnipeg and Complete Communities vision and policies set out,

THEREFORE BE IT RESOLVED that the Standing Policy Committee on Property and Development, Heritage and Downtown Development direct the Winnipeg Public Service to undertake a comparative analysis on the Waverley West development following 12 years of construction where the goals and principles outlined in the OurWinnipeg and Complete Communities policy were applied, and to use results of the analysis to build on lessons learned for the current OurWinnipeg review.

AND BE IT FURTHER RESOLVED that as part of the comparative analysis, the Winnipeg Public Service consult with the four resident associations (Bridgwater Trails, Bridgwater Lakes, Bridgwater Forest and South Pointe) in the Waverley West Communities to hear perspectives of the residents who live in the new community.

AND BE IT FURTHER RESOLVED that the Public Service report back with results of the analysis prior to the January, 2018 Riel Community Committee meeting so the information can be considered in the deliberations of the request to amend the development agreement conditions for File DASZ 8/2012 (AG 8/2012)