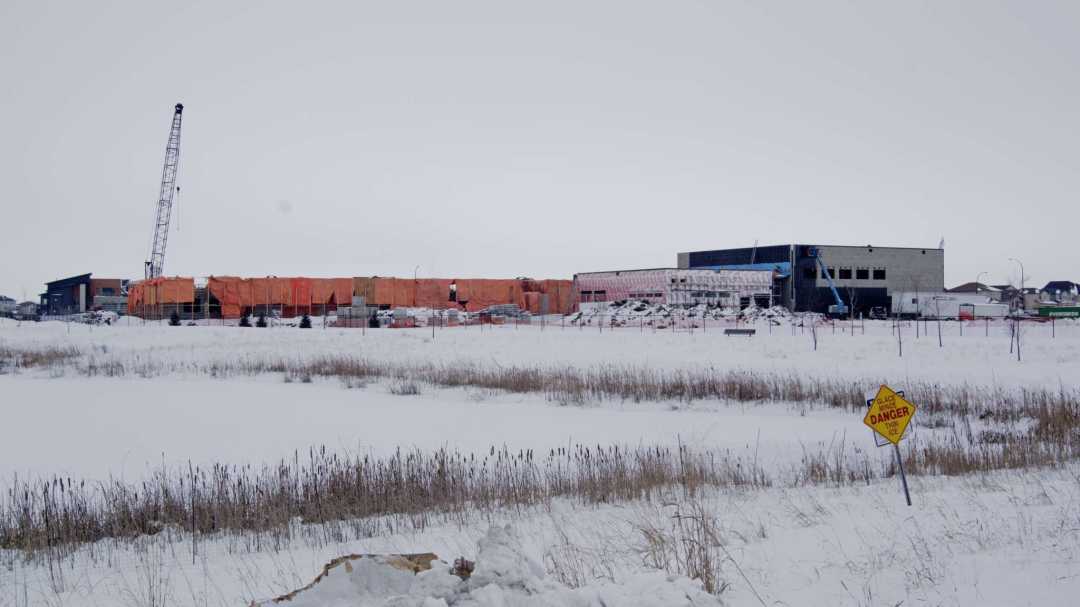 Construction on Pembina Trails’ newest school has been set back about five months, officials say.

The new kindergarten to Grade 8 dual-track school in South Pointe will open to students in January 2017, rather than this September as previously hoped.

“We had some plans for other schools in the division that were changed,” Fransen explained. “As a result of those changes we applied to the province to make South Pointe a larger school.”

Following the city’s rejection of the division’s appeal to permit a bus lane and more off-street parking at École R.H.G. Bonnycastle in September 2014, Fransen said the division applied to up the capacity of South Pointe from 600 to 800 and add eight additional classrooms.

“All of that led to design changes to the building, additional square footage, which led to delays with the city’s permit department,” he said “All of which is understandable.”

Prior to the opening, South Pointe students in English language programming will be split between Acadia School, Bairdmore School, Dalhousie School and Ryerson School for the beginning of the year.

“There will be satellite classrooms in a number of other schools as close as possible to South Pointe,” Fransen said. “And as much as possible, students will be in the same school they are in this year and will be organized in South Pointe classrooms.”

Students going into Grade 7 will be housed at Dalhousie and access applied arts and band rooms across the field at Acadia. French language students will stay in their present schools. All students will be moved into the new school with their teacher at the beginning of January.

Assistant superintendent Elaine Egan is expecting a starting student population of 500 for South Pointe, though she is still unsure about kindergarten registration numbers. She said the student population at existing schools will not be affected due to the delay in construction and once students are moved to South Pointe, classroom sizes at nearby schools will become more reasonable.

“Some of those buildings are full — they’re over full,” she said.

“Even though the building itself won’t be ready till later in the year we’d love to be to host an event, say the Terry Fox Run, on the grounds,” Dyck said. “So that the children… would be walking and running through their future community and get a sense of themselves as being South Pointe students.”

There is still more work to be done before September including the hiring of teachers and the formation of parent committees.

The division will be holding an information night for South Pointe parents and the community on Jan. 27, 2016 at 7 p.m. in the theatre at Fort Richmond Collegiate. Officials will introduce the administration team, lay out the plan again for classes come September and answer any questions.

“We want to create the excitement that we feel and as much as possible to alleviate any anxiety that families may feel,” Egan said.

Division to provide transportation from daycare to South Pointe School

Ted Fransen, superintendent of Pembina Trails School Division, says the division will provide bus transportation for students attending school at South Pointe but going to daycare at a centre in their former school.

The arrangement was made to alleviate any hassles of switching to a new daycare mid-year.

Students in daycare can choose to remain at the same centre they registered for in September.

“We will do our very best to be as supportive as we can be to parents who find themselves in difficult situations with getting daycare space. We’ve made a decision to provide some interim bus transportation for the six months of 2017,” Fransen said.

The daycare at South Pointe School is operated by K.I.D.S. Inc. and operators say it will also open January 2017, pending licensing approvals.

Parents can register for daycare through the province. However, the waiting list for a spot at South Pointe School daycare will open in July 2016.