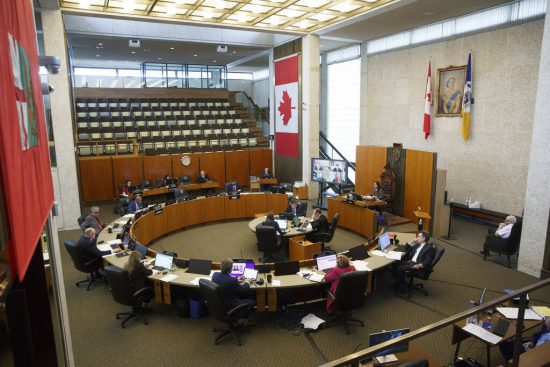 A group of seven executive policy committee members, plus the deputy mayor and acting deputy mayor, is currently referred to by critics as “EPC+2,” which they deem a nine-member voting block within the 16-member council.

With that entire group reportedly invited to more meetings than others, critics say its members receive more information than other councillors, with the expectation their votes will match the mayor’s on key policies.

Some of the remaining seven councillors have complained that leaves them with less influence over decisions and less information to base votes on.

A long-awaited city governance review released Thursday calls for council to set a “maximum number” of appointments by the mayor that would ensure the number does “not exceed 50 per cent of council” once the mayor is added to it.

“The net effect of the current process is that with nine of 16, the mayor and mayor-appointed roles can control decisions of council. Public engagement identified concerns with the associated power imbalance created by the current appointment structure. The influence of the mayor in Winnipeg is extraordinary,” consultant MNP found, noting this was not duplicated by other Canadian cities the company studied.

“This existing model, it allows a mayor to not speak to councillors, if he chooses not to, as long as he’s got his nine votes,” Lukes said Thursday.

Another recommendation calls for the city to ensure all wards are “reasonably represented on the executive policy committee over time,” which Lukes expects would improve collaboration.

“If everyone had a chance to be on EPC, everyone (would know) that they’ve got to work with each other and that their turn will come,” she said. “Right now, in this current model, (some) councillors are asked to make multimillion-dollar decisions with no briefings, no background information… It’s just not a good model for the taxpayers.”

Lukes said all are needed: “I think we fail in communication and I also think the governance model prohibits the sharing of information so (residents) don’t know what’s going on.”

Mayor Brian Bowman has shouldered the bulk of the criticism over EPC+2, as previous mayors traditionally appointed EPC members to the deputy mayor and acting deputy roles, meaning the full group would account for less than half of council.

Bowman was not available for an interview Thursday.

Coun. Brian Mayes, an EPC member, said he would accept the call to name a deputy mayor and acting deputy mayor from within EPC.

However, Mayes stressed there is value to having certain councillors lead policy committees (as EPC members do) for an extended period, which allows them to gain knowledge.

“There’s a federal cabinet, there are provincial cabinets for a reason… We need to have people up to speed on these files (and) somebody from the elected ranks with some responsibility,” he said.

The report also calls for changes to development processes, for the Indigenous advisory council to provide advice directly to council and other measures.

One Winnipeg resident questioned why the city released the report just six days before it is scheduled for an EPC vote Jan. 19. A public service report notes the final review was submitted to the city in late October 2021.

“It’s kind of unfair that the public only gets six days before EPC to comment and review a 300-page report on something as important as city governance,” said Marianne Cerilli.

A spokesperson for the mayor’s office noted a lot of the information leading up to the final report, including preliminary findings, has been online since January 2021, though recommendations were not.

MNP notes some of its proposals could require new funding or changes to the city’s charter. Any charter changes would require provincial approval.