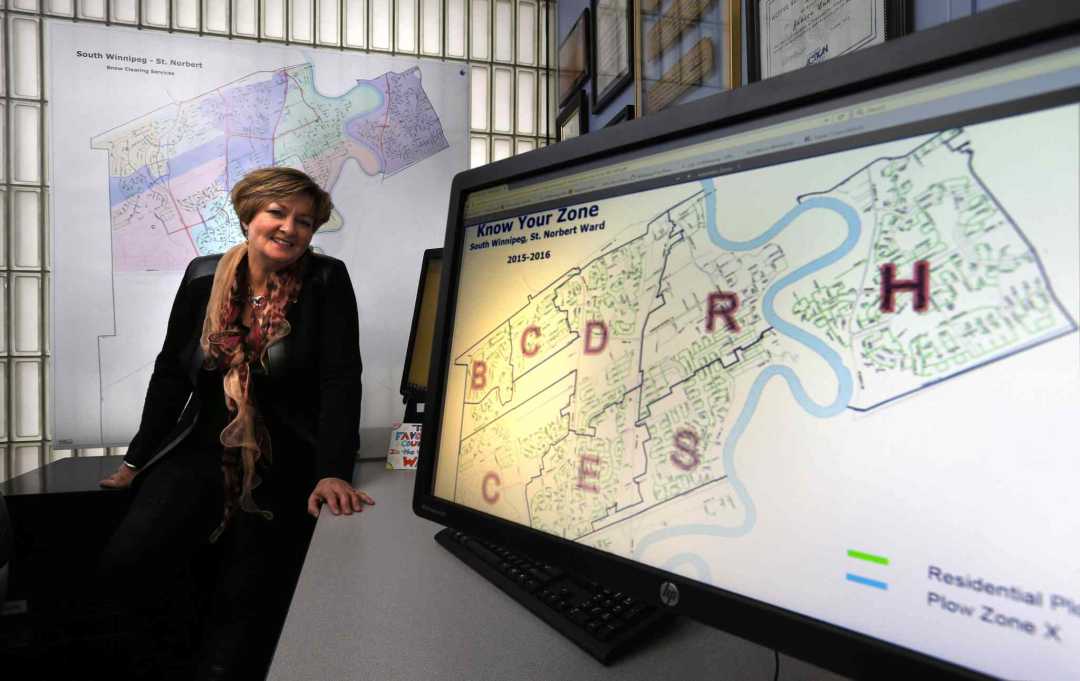 As city hall prepares for the first major snowfall of the season, St. Norbert Coun. Janice Lukes has done some preparations of her own.

Frustrated by what she calls the lack of clarity on the city’s website, Lukes has posted a map on her website that identifies in which snow zone each neighbourhood in her ward is located and a simple explanation for the various parking ban regulations.

“Engineers are brilliant, wonderful people. Are they the best at communicating to the masses? I’d hazard to say ‘No,’ they’re not,” Lukes said.

Lukes (South Winnipeg-St. Norbert) has gone public before with her concerns about city hall’s poor communications track record. In May, she told reporters the city’s communication system was “broken.”

While Lukes said there have been improvements in that area, she said there is still a long way to go — the most glaring example is the city’s information about overnight winter parking bans and its Know Your Zone program.

Lukes said the information about winter parking rules on the city’s website is confusing and the Know Your Zone map is not helpful.

Ironically, Lukes contacted the city’s public works department and had them draw up a map of her ward and highlighted the zones for each neighbourhood. Lukes also rewrote the city’s information about the various parking restrictions.

“My prior 14 years of advocacy work really has shown me how critical good communication is,” Lukes said.

Instead of using her ward allowance for personal advertising, she said she allocated the funds to create a useful website for residents in her ward.

“I can be thorough, in-depth,” Lukes said of her posts highlighting developments in the ward and broader civic issues.

Lukes is the only city councillor who has a map showing the neighbourhood zones of the Know Your Zone on-street parking program.

Some councillors posted on their own websites the confusing (and not-quite-transparent) news release the city issued last week to explain why it won’t be issuing parking tickets to motorists who ignore the over-night parking bans.

Some councillors had a link to the city’s website about the overnight parking rules.

But only Lukes went to the trouble to have civic staff draw up a simple and useful map of her neighbourhood.

She said she’s hopeful a similar Know Your Zone map of all wards will be posted on the city’s website.

“I have never worked in a bureaucracy. Maybe I’m naïve on how a bureaucracy works,” Lukes said. “I’m trying to fix the big picture but in the meantime, this is what I’m doing with my website.”

Improving civic communications has been a priority for Mayor Brian Bowman, who has initiated measures to place more information on the city’s website and in a format that is useful to more people.

Lukes said she remains hopeful the city’s corporate communications will be improved. There is a new boss and the department reports directly to new CAO Doug McNeil.

“When I met the mayor for the very first time, I said ‘I don’t care what we do, if we can’t communicate it, what’s the point, right.’ He totally agreed. He’s all over this. We’re ramping up the communication people.”