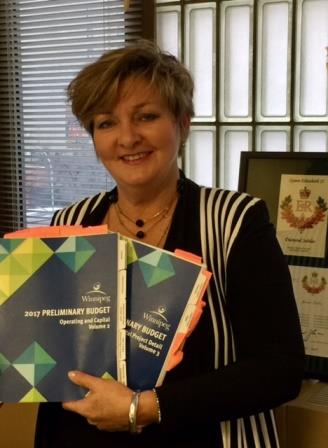 Much was written by the media on the overall 2017 budget.  This update provides a brief overview of the city-wide budget, including a focus on key highlights for the South Winnipeg-St. Norbert Ward.

Prepare to experience a lot of construction on the south end of Pembina Highway this summer!  Definitely some pain before the gain – BUT great news overall!

Along with the bike lanes that will be installed as part of the Pembina Highway upgrades (mentioned above), there are a number of initiatives taking place:

Two parks will be receiving upgrades as part of the City’s Capital budget:

Ward Councillors have additional funding which they can dedicate to parks, and I will be meeting with Parks staff in  early January, 2017 to determine additional projects/budgets. I anticipate that funding will be allocated to:

Transit funding for routes in BOTH Bridgwater and South Pointe was approved in the 2017 budget process! This is welcome news for thousands of transit users in these growing communities! I’ve been working since elected to secure funding in the budget for transit expansion into the communities of Bridgwater and South Pointe, and am extremely pleased that funding for the routes expansions was approved by City Council in the 2017 budget.

There is very positive progress on this ‘complex’ Recreation Campus project.  I’m very pleased to have secured funding in the 2017 budget process:

There are many initiatives underway on this project – for a complete overview see: South Winnipeg Recreation Campus