The north segment of Pembina Highway, from Arbuthnot to Osborne, will undergo major construction in 2016/2017.  This 2-year project is a massive undertaking which will affect many residents in the South Winnipeg-St. Norbert Ward.  I encourage you to attend the upcoming open house on April 21, 2016 to ask questions, voice your concerns, and learn more!

In November, 2014, the newly elected City Council set priorities and concluded fixing our roads was the #1 priority.  Just four years ago, the former City Council spent $30.9 million on regional and local roads.  This amount increased substantially in 2015 when the new Council invested $103 million.  And in 2016, the record-setting investment approved by Council is $105 million for local and regional street renewal.  Of this amount, $11.7 million is budgeted in 2016 for the design/construction project on Pembina.

I will be providing regular updates on all summer construction projects on my website.  You can also sign up for the City of Winnipeg’s public engagement newsletter for updates (see link at the bottom).

NOTE:  If you are unable to attend, view the open house presentation boards and provide feedback through this survey.

1. How will you keep traffic moving during construction?  The City attempts to mitigate construction impacts as much as possible. We are committed to providing timely communication throughout this project.  To expedite construction activities, two lanes will be closed throughout the day, except:

Fast curing concrete (24hr or 72hr) will be used where a quick cure time will expedite activities and reduce impact to the public.

2. Will I be able to access area businesses during construction?  Access to businesses will be maintained as much as possible throughout the project. Approaches may be closed for short durations (less than 1 week) to facilitate construction. Parking will be restricted on the side of Pembina under construction.
3. How will parking be impacted on Pembina Highway once the project is completed?  As a general rule, on-street parking is being maintained where businesses fronting Pembina Highway do not have surface lots. Within the limits of the project there will be a loss of 26 parking spaces out of a total of 61 spaces. All the areas where parking is being removed were found to have an average utilization of less than 10%.
4. Why add buffered bike lanes?  The City is committed to developing a pedestrian and cycling network that is safe and accessible for people of all ages and abilities. This project will lead to a smoother ride for motorists as well as increased safety for cyclists with the addition of a buffered bike lane and new, improved sidewalks for pedestrians.
5. How much will this project cost?  $11.7 million is budgeted in 2016 for 2016/2017 design and construction. 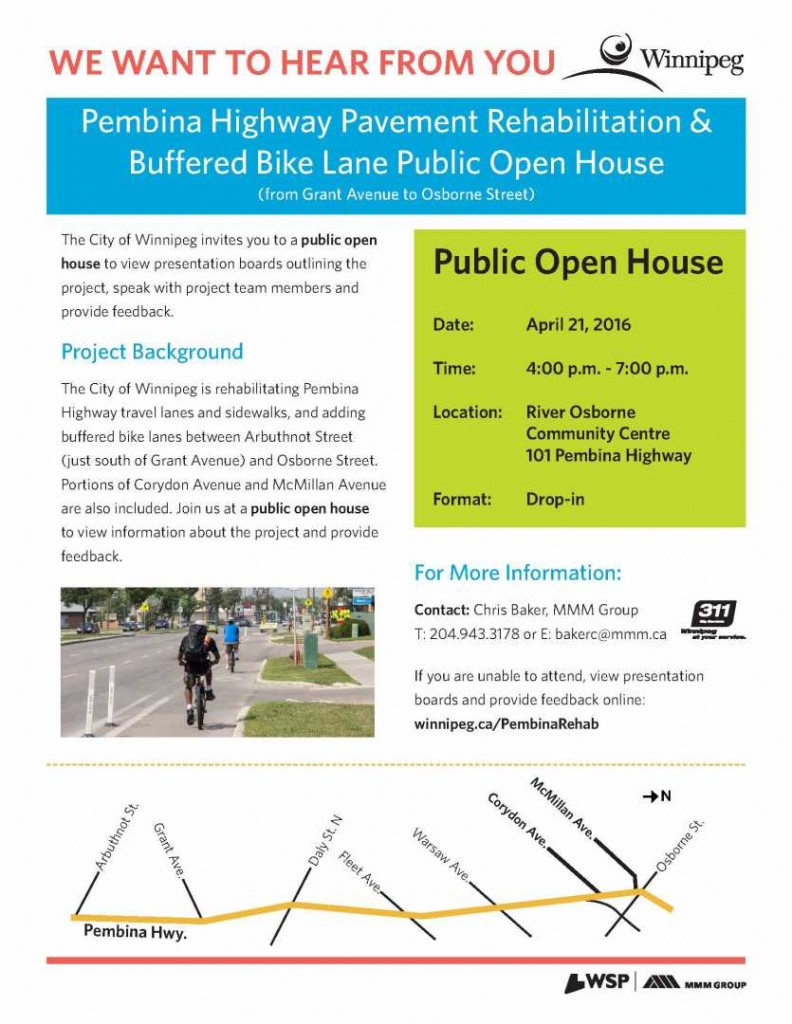