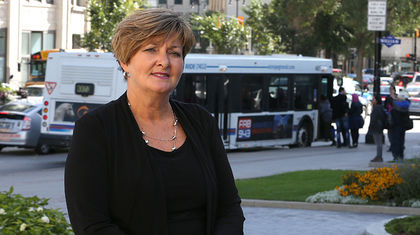 In the wake of an operational fiasco at Winnipeg Transit last week, the head of city hall’s public works committee says Winnipeggers, and those elected to govern them, have to rethink their priorities in making ends meet.

Coun. Janice Lukes (St. Norbert) said if Winnipeggers are to get an improved, more reliable Transit product that continues to advance with the times and needs of its users, the money will have to come from somewhere.

“I think that the (number of) people using Transit is increasing and growing, but our ability to provide the service isn’t at the same rate as Transit is growing,” Lukes said. “The city is no different than a homeowner because we have a budget … and we have many competing interests. So, as a growing city, we’re going to have to be making some hard decisions on how we want to grow, what direction we’re going in.”

Questions about Transit’s operations arose last week when the city was forced to reduce bus service after problems with engine emissions controls took nearly 100 buses off the streets for repairs.

It led to a slew of negative headlines in a city already entrenched in a contentious back-and-forth over rapid transit plans.

Lukes believes, in general, Winnipeggers’ views on the importance of transit is much more favourable than even five years ago. In that setting, she believes, you will find a population more agreeable to change.

Lukes said a national transit strategy would be helpful, but she’s not holding her breath on that, nor for greater funding from the province.

Mayor Brian Bowman, meanwhile, said the city will continue to have conversations with the other levels of government on Transit, which he called a high priority. He said updates he gets from Transit tell him the operation is running “reasonably well.”

“We want the service to be as good as possible,” he said. “It assists with densification, it encourages transit-oriented development. There’s a number of benefits to having a public transit and we want to make sure our public transit is as good and as efficient as possible.”

Somewhat hidden amid the backlash over service reduction was the announcement from Transit director Dave Wardrop that Transit’s planned smart card initiative was being pushed back once again. The card, which would eliminate the need for riders to dig for change to pay their fare On Thursday, Wardrop said the service, which was originally slated to be rolled out in September 2013, wouldn’t be available until 2016. He said similar problems were experienced in other cities that prematurely unveiled their smart-card product, which led to “tremendous customer dissatisfaction.”

He said Transit is “not pleased with the progress of the contractor,” but said there’s no plans of cancelling the program.

“There’s a number of technical issues that we’ve experienced,” he said. “We’ve run a number of tests now and every time we run through a set of tests we deal with a number of problems. … We want to address those to have as much of a trouble-free system as possible when it comes time for implementation.”

A Winnipeg transit advocate said he would give the city’s bus service a failing grade, even before a mechanical catastrophe wreaked havoc with scheduling earlier this month.

Dave Mouland has been using Winnipeg Transit since he arrived in the city in 1968 and said service in the city has regressed in recent years.

“… They’ve been going about it the wrong way. The number of buses has not increased for about 20, 25 years and yet there have been new routes put on, existing routes extended with the same amount of buses. So that has increased the length of time between buses. So what used to be 20, 25 minutes between buses is now 45 minutes.”

Transit has come under great scrutiny in recent days with the city admitting a faulty emissions system led to a number of buses being taken off the road for repair, which in turn led to scheduling difficulties.

Mouland said that was an issue Transit should have known about and dealt with months ago.

“I think they should have looked at it during the summer,” he said. “Apparently there’s been a shortage of buses for the last 18 months or so, and it’s been getting progressively worse. So why leave it until the last minute so the general public has to suffer?”

Janice Lukes is calling on Winnipeggers to raise their voice.

Lukes said past councils have never dealt with a large public outcry on the issue.

“I’m just hoping we have that now,” she said. “I’m hoping that people really voice their concerns. I’m encouraging it on Twitter, I’m telling people tell me what you think, tell me about the routes. I want to hear. And I want all residents that want to see better transit to call their councillors so that they understand.

Some facts about Winnipeg Transit:

* Winnipeg Transit has a fleet of 585 buses.

* A bus can operate for approximately 35 hours on one tank of fuel.

* Winnipeg Transit spends about $18 million on fuel each year.

* Average lifespan of a Winnipeg Transit bus is about 18 years.

* There are approximately 5,170 bus stops in Winnipeg.

* There are approximately 2,005 transit benches in Winnipeg.