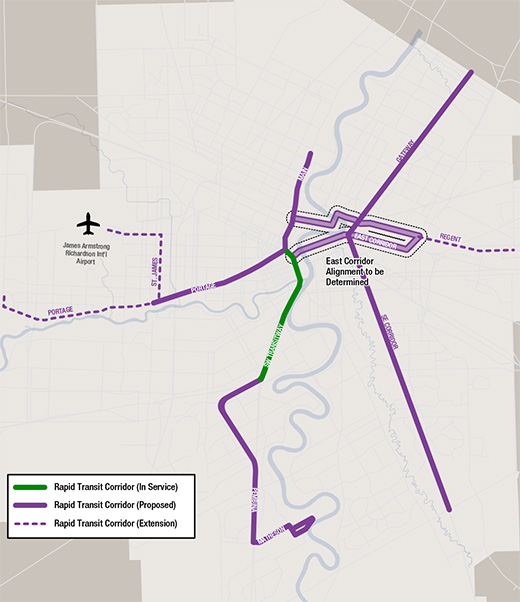 Planning and construction for the Southwest Rapid Transitway are well under way.  When Stage 2 of the project is complete and operational in 2020, the Southwest Rapid Transit Corridor will link Winnipeg’s downtown to Winnipeg’s southwest neighbourhoods, including the University of Manitoba and Investors Group Field. Existing feeder routes in the southwest quadrant of the City will connect with the rapid transit corridor.

My thanks to the Winnipeg Free Press for reporting on this initiative.

Stay away from Jubilee interchange this long weekend

Winnipeggers aren’t the only ones going on holiday this long weekend — a key portion of Pembina Highway is also taking the weekend off.

For 56 hours, all five traffic lanes in the Jubilee Underpass will be closed to motorists as construction crews continue to build a crucial piece of the next stage of the Southwest Rapid Transitway. That means an estimated 150,000 vehicles will be scrambling and looking for other north-south routes in this area of the city starting at 8 p.m. Friday and ending at 4 a.m. Tuesday.

For the first time since the Jubilee interchange opened in November 1969, no regular motorists will be allowed through one of the busiest traffic routes in the city for an extended period. The city says about 70,000 vehicles travel northbound and southbound there every weekday. Saturday’s traffic is about 56,000 vehicles and Sunday’s is about 50,000.

Scott Payne, manager of asset management for Winnipeg Transit, said the only exceptions will be emergency vehicles, transit buses and the special shuttle service vehicles the city has organized for pedestrians walking north and south on Pembina Highway.

“We couldn’t safely do the work with numerous motorists and pedestrians going through,” Payne said Thursday.

“(Having pedestrian shuttles) doesn’t happen very often, but we appreciate a pedestrian will have to go quite a distance because of the closure. They would have to go all the way to Waverley (Street) or Osborne (Street) because of the rail lines. These shuttles will go through the underpass, and they will stop construction when the pedestrian (shuttles) are there.”

Payne said there won’t be as many transit buses going through the site as most days because they will be on weekend schedules.

The city is recommending motorists use alternative routes including Osborne, Waverley and Kenaston Boulevard.

Coun. Jenny Gerbasi (Fort Rouge – East Fort Garry) said the road closure may result in short-term pain for motorists and long-term gain for bicyclists, bus riders — and even motorists — when the next stage of the rapid transitway is completed.

“This will be a fantastic transportation route,” Gerbasi said. “It is dark and narrow there now for bicyclists and pedestrians, but (this) will open paths in both directions of Pembina. Everyone you talk to about the bike paths say this is fantastic.”

Gerbasi said while the new bus route and bikes will dog-leg off Pembina, it will soon become the route of choice for students bicycling to and from the University of Manitoba in this area.

“You’ll have a consistent separate bike lane here — it’s completely separate from cars — and it will be plowed all winter,” she said. “When people are safe from cars, people will go on it.”

Gerbasi said she’s also pleased that while the construction is ongoing on this project, the city is already getting feedback for the next route to the east side of the city from downtown.

“We really need to build this system,” she said. “We only have 1.4 kilometres of rapid transit now.”

When the Jubilee interchange was officially opened, provincial transportation minister Joe Borowski drove a 1901 Oldsmobile over the span, followed by other antique vehicles carrying municipal and U of M officials.

The interchange over Pembina was designed to link with the then-proposed Southern Expressway from downtown to Pembina Highway south. It was intended to also reduce the traffic bottleneck produced by the thousands of vehicles turning off and on to Pembina from Jubilee Avenue.

The city has said the current Southwest Transitway project will cost $467 million and include not just the changes at Jubilee and Pembina, but also other overpasses or bridges, nine rapid-transit stations, and a new bus roadway and active transportation path running from Jubilee to the University of Manitoba.

The Jubilee work is expected to be done by 2019, and the entire Transitway project will be open in 2020.

Payne said the work being done on the underpass this weekend is extensive, with construction crews knocking out some of the supports between the northbound and southbound lanes as well as the six-metre high retaining walls.

“They’ll take a good portion out… and then the new piers will go up (in the weeks ahead),” he said.

Payne said the east-side sidewalk will also be demolished, but a temporary replacement pathway will be put in at the same place, at a lower elevation.

He said asphalt will be put down to facilitate lane changes as the construction progresses, so some northbound or southbound traffic lanes may sometimes be shunted over into another lane.

“When it is all completed, it will look like new,” Payne said of the underpass. “There will be a significant number of improvements for motorists, cyclists and pedestrians.”

Payne said improvements will include:

But Payne said this won’t be the only time all lanes of Pembina will be closed at this site.

“There will be additional weekend closures,” he said, including when bridge girders are lifted into place. “We will give advance notice. We want to minimize the closures.”