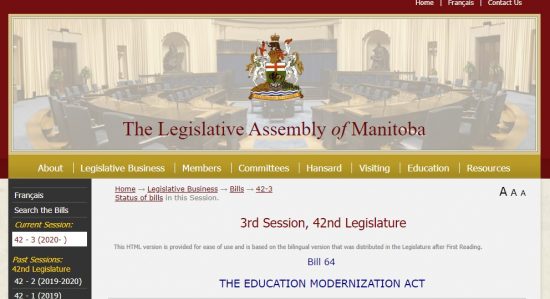 My speech regarding Motion to Council

Firstly – City of Winnipeg Councillors have the lowest office resources in all of Canada – I want that on the record.

When you have the lowest office resources in all of Canada, you have to be very very selective on what you focus your time and your staff time on. You have to focus on issues that are relevant to your ward – and to the City of Winnipeg.

I also want on the record that over the past 4 years, the City of Winnipeg has seen an increase in population of 40,000.

So how is this related to Bill 64?

My point is – receiving over 11,000 residents and approving hundreds of millions of dollars of development – takes focus and time.

And this City building work, with limited resources – has not provided me with the time to even read the 337 page Bill 64 Education Modernization Act.

What I have heard today through the presentations, is that Bill 64 is a deeply complex structure.

And what else I have heard today is that the consultation process and finalizations of the Education Modernization Act is not complete – that work is still being done.

I’ve spent a great amount of my time at City Hall trying to change decades old systems for the betterment of Winnipeggers and I absolutely think the decades old education system, process, etc. should be modernized.

But honestly, I’ve not done any homework on Bill 64. I know there is a lot of media on this file some objective and many perspectives. There are dozens of reports on today’s City agenda which I’ve been focusing on;

Why would I oppose a proposal that is not yet complete? That is still being worked on ?

I’m not going to oppose something still being worked on.