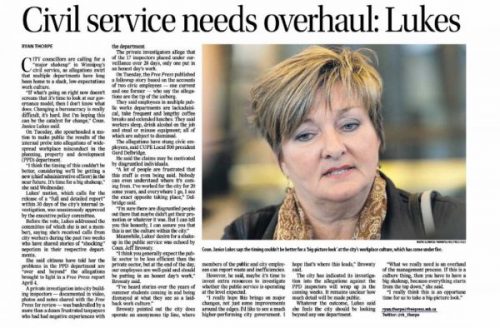 Thanks to the Winnipeg Free Press and reporters Ryan Thorpe, Aldo Santin and Larry Kusch for covering this important issue.

Councillors call for change in wake of work culture investigation

City councillors are calling for a “major shake-up” in Winnipeg’s civil service, as allegations swirl multiple departments have long been home to a slack, low-expectations work culture.

“If what’s going on right now doesn’t scream that it’s time to look at our governance model, then I don’t know what does. Changing a bureaucracy is really difficult, it’s hard, but I’m hoping this can be the catalyst for change,” said Coun. Janice Lukes (Waverley West). On Tuesday, she spearheaded a motion to make public the results of the ongoing internal probe into allegations of widespread workplace misconduct in the planning, property and development department.

“I think the timing of this couldn’t be better, considering we’ll be getting a new (chief administrative officer) in the near future. It’s time for a big shake-up,” she said Wednesday. Lukes’ motion calling on the release of a “full and detailed report” within 30 days of the city’s internal investigation was unanimously approved by the executive policy committee.

Prior to the vote, Lukes addressed the committee (which she is not a member of), saying she’s received calls from city workers during the past two weeks who have shared stories of “shocking” nepotism in their respective departments. She said citizens have told her the problems in the PPD department are “over and beyond” the allegations brought to light in a Free Press report April 4.

Winnipeg City Councillor Janice Lukes: “What we really need is an overhaul of the management process… you have to have a big shake-up, because everything starts from the top down.”

A private investigation into city building inspectors — documented in video, photos and notes shared with the Free Press for review — was bankrolled by a group of more than a dozen frustrated taxpayers who had previously had negative experiences with the department.

The private investigators allege of the 17 inspectors placed under surveillance over 28 days, only one seemed to be putting in an honest day’s work.

On Tuesday, the Free Press published a follow-up story based on the accounts of two civic employees — one current and one former — who say the allegations are just the tip of the iceberg.

They described a culture in multiple public works departments of short, lackadaisical workdays, peppered with frequent, lengthy coffee breaks and extended lunches, and one where fireable offences — including sleeping, drinking alcohol on the job and theft or misuse of equipment — are rife.

Lukes’ desire for a major shake-up in the Winnipeg public service was echoed by Coun. Jeff Browaty (North Kildonan).

“I think you generally expect the public sector to be less efficient than the private sector, but at the end of the day, our employees are well-paid and should be putting in an honest day’s work,” Browaty said.

“I’ve heard stories over the years of summer students coming in and being dismayed at what they see as a laid-back work culture.”

Browaty pointed out the City of Winnipeg does operate an anonymous tip line, where members of the public and city employees can report waste and inefficiencies. However, he said, maybe it’s time to look at investing extra resources in proactively investigating whether the public service is operating at the level expected.

“I really hope this brings on major changes, not just some improvements around the edges. I’d like to see a much higher-performing city government. I hope that’s where this leads,” Browaty said.

The City of Winnipeg has indicated its investigation into the allegations against the PPD inspectors will wrap up in the coming weeks. It remains unclear how much detail will be made public. Whatever the outcome, Lukes said she feels the city should be looking beyond any one department.

“What we really need is an overhaul of the management process. If this is a culture thing, then you have to have a big shake-up, because everything starts from the top down,” she said.

“I really think this is an opportune time for us to take a big-picture look.”

Brian Pallister has announced an independent review of how the City of Winnipeg approves and inspects construction and development projects, sparking a new controversy in the ongoing feud between Broadway and city hall.

The premier unveiled the initiative in a speech to about 350 people attending a  Manitoba Chambers of Commerce breakfast Thursday. Civic officials found out about it via email, just moments before Pallister began speaking. Pallister said the review, which will include the permits process at Manitoba Hydro, the Office of the Fire Commissioner and the Red River Planning District, and possibly other municipalities and provincial bodies, was being launched as a result of ongoing concerns raised by various stakeholders, and not as the result of recent allegations about the work habits of city building inspectors.

But Winnipeg Mayor Brian Bowman said he is concerned the review is merely a “partisan, politically-motivated” attack on the city.

Bowman told reporters later in the day city council two years ago requested the Pallister government to hold a formal public inquiry under the Evidence Act, to examine a host of issues at city hall including the police headquarters project and conflict of interest issues between elected and senior civic officials and the firms that do business with city hall. Bowman said Pallister has ignored the request but now appears motivated by the residential development industry, which he labelled a “special interest” trying to regain control of city hall, a boogeyman he raised often during the 2018 civic election campaign.

“If the premier’s intentions are genuine, he would call a public inquiry today. However, I fear this is simply a partisan, politically motivated exercise and far from being independent,” Bowman said. “There are powerful special interests keen on regaining control at city hall. Now is not the time, on the precipice of a potential provincial election, to allow those powerful special interests and industry stakeholders to use the province as their agent to regain control.”

A letter was sent to Bowman and other members of council from Municipal Relations Jeff Wharton, shortly before 8 a.m. Thursday, informing them of the province’s plan to conduct the review and also repeating an offer to work with the city on a “broader fiscal performance review” of its operations to identify cost saving measures.

Bowman said Pallister’s announcement was another in a long line of unilateral decisions taken by the province that have hurt city taxpayers, citing the end of the 50-50 joint cost-sharing agreement for Transit and the disputed $40-million for road work done last year.

Pallister told the business group Manitoba can’t be the most improved province — something that has become a mantra for the province’s 22nd premier — “unless Winnipeg is our most improved city.”

He said that doesn’t mean more provincial money for Winnipeg, but improvements in construction and land development and expenditure management by the city.

“In particular, industry stakeholders have told us they’re concerned about the efficiency, the timeliness and the accountability of building permitting inspections and approvals,” Pallister said. “These concerns aren’t just limited to the City of Winnipeg processes and staff accountability. They’ve been raised in relation to the time frames involved in obtaining approvals from other authorities as well.”

He later told reporters that an internal city review is inadequate; it must be arm’s-length.

“The city is put in a rough spot, frankly, trying to do an internal review on this. They are doing a bit of an investigative study right now, and of course we’ll build on the work that they’re doing. But it needs to be an arm’s-length exercise, I think, to work effectively.

Pallister couldn’t say Thursday who would conduct the independent review. He said those details are still to be worked out.

“I’ve just talked to my clerk (the province’s chief bureaucrat) about this in recent days,” he told reporters.

Pallister said the independent review would extend outside of the city as well to include the Red River planning district (which is responsible for planning matters for the RMs of St. Andrews, East St. Paul, West St. Paul, St. Clements, the city of Selkirk and the Village of Dunnottar), Manitoba Hydro and the Office of the Fire Commissioner. However, examining the City of Winnipeg’s planning, property and development department’s processes will be one of the first steps in the review.

In recent days, the Free Press has reported allegations of widespread misconduct among city building inspectors, including short, lackadaisical workdays, peppered with frequent coffee breaks, extended lunches, personal errands and shopping, and even drinking on the job.

Meanwhile, the premier said his government learned a lot about managing costs as it tackled a large provincial deficit upon taking office in 2016. He offered to share pertinent reports the government has received from consultants as it’s strived to reduce costs. He also offered to cost-share the fiscal review with the city.

“We’re not mandating that the city do a performance review. We just think it would be a really timely, good idea,” Pallister said.

Bowman said the city, which is conducting its own internal probe into the allegations against the building inspectors, would co-operate fully with the province on the review but he said he would like a meeting with Pallister first to discuss their mutual concerns.