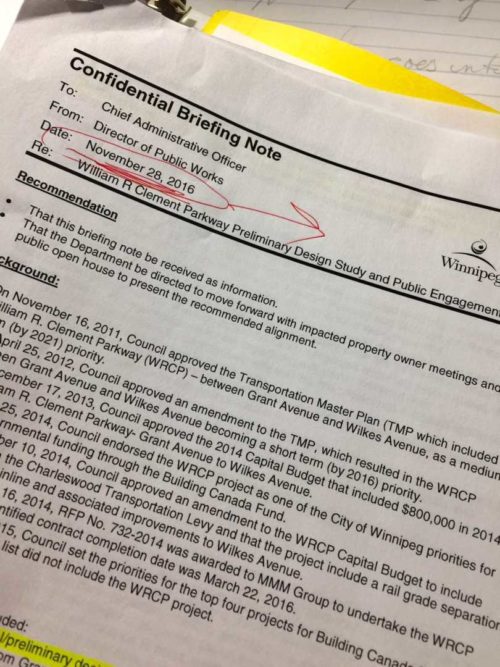 Confidence in the City’s Chief Administrative Officer (CAO) has come into question again with the handling of the Wilkes Avenue Alignment to William R. Clement Parkway Extension file. There has been extensive media coverage on this issue. I am highlighting my major concerns in this blog and will continue to seek accountability and answers to many outstanding questions.

Councillor Morantz brought forth a recommendation to the Mayors Executive Policy Committee requesting the City Auditor to Audit the Effectiveness of Current Systems and Processes in relation to the Sterling Lyon / William Clement Parkway Study. The motion was accepted by the Mayor’s Executive Policy Committee and recommended to Council as follows:

From my perspective, and from all the statements the CAO and Councillor Morantz have stated in seeking accountability, I believed the motion brought forward was a whitewash and would not address the issue of accountability to the taxpayers.  The Free Press provided comprehensive coverage: Morantz’s motion called a ‘whitewash’

PLEASE NOTE:  Councillor Morantz was asking for an audit of the EFFECTIVENESS of the current systems and processes and IF they were adhered to in the Sterling Lyon / Clement study – nothing else.  So the RESULTS of the audit would be either:

With thanks to Winnipeg Free Press and CBC for covering the story.
CBC Coverage