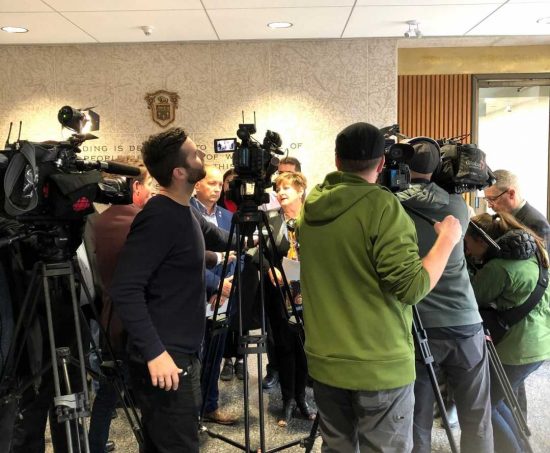 Today – Councillor Nason and I met with media and community – to discuss our motion regarding Quebec’s Bill 21. See media release below:

Councillors Shawn Nason and Janice Lukes are bringing forward a Notice of Motion to the October 24th, 2019  Council meeting. The Councillors will ask Council to suspend the rules and allow delegates to present and allow Council to debate the motion.

The motion is requesting Winnipeg City Council oppose Quebec’s Bill 21, and support in principle, the constitutional challenge to Bill 21, and continue to support building a welcoming and inclusive city where everyone has access to opportunity and prosperity.  Residents from both Councillor Nason and Lukes’ wards have been discussing Bill 21 and its implications.

“Bill 21 negatively affects individuals who wear religious attire in Quebec but also sets a dangerous precedent of legislated intolerance. Bill 21 undermines basic freedoms and human rights and we as Canadians have a duty to speak out, no matter where in Canada this is happening.” said Simarpreet Singh, Transcona resident. “I urge all Canadians to reach out to their elected officials to voice their concerns and stand in solidarity with those facing discrimination in Quebec.

“We are a City that is enriched by immigration from all corners of the globe; the situation within Quebec that is in itself a distinct and richly cultured society is disturbing to many within our community.” said Councillor Shawn Nason. “When approached by Mr. Simarpreet Singh, regarding his deep concern that this Bill 21 could move to other provinces in the Federation I felt compelled to support in whatever small way I could in my roles as a Councillor, to support putting our Religious communities at ease.”

“Winnipeg is a city that stands firmly to support religious freedom as aligned with the Canadian Charter of Human Rights.” said Councillor Lukes. “It is important that Council take a stand and send a strong message that we are against discrimination.”

“Canada is my home and I expect my home to be a safe place for me. This shows me everyone in my home is supportive of me and gives me the freedom to express myself.” said Tasneem Vali, member of the Manitoba Islamic Association.

WHEREAS in 2019 the Province of Quebec enacted Bill 21 (An Act Respecting the Laicity of the State) which prohibits public servants from wearing religious symbols including turbans, hijabs, kippahs, the cross and  many others;

AND WHEREAS religious wear in certain traditions is considered an important act of devotion and is not a mere symbol of religious identity;

AND WHEREAS the wearing of religiously-mandated signs or clothing as/or  religious symbols is a fundamental right in the exercise of “freedom of thought, conscience and religion,” as written in Article 18 of the Universal Declaration of Human Rights; and does not in any way diminish the ability of public servants to fulfill their duties;

AND WHEREAS restricting the ability of citizens from wearing religious symbols affects all components of society: first nations, settlers and immigrants;

AND WHEREAS The City of Winnipeg stands firmly to support religious freedom as this is aligned with the Canadian Charter of Human Rights;

AND WHEREAS a secular and religiously neutral state is achieved by treating all citizens fairly through unbiased governance structures that do not favor one religion over another;

AND WHEREAS forcing citizens to abandon certain cultural and religious practices will create an environment that fosters intolerance and inequity;

AND WHEREAS Bill 21 is a divisive law that perpetuates exclusion, discrimination, and class division by increasing systematic barriers to employment for religious groups;

AND WHEREAS The National Council of Canadian Muslims (NCCM), the Canadian Civil Liberties Association (CCLA), the World Sikh Organization (WSO) and others have initiated a constitutional challenge against Bill 21;

AND WHEREAS Winnipeg City Council is a signatory of The Declaration to join the Canadian Coalition of Municipalities against Racism and Discrimination (2006);

AND WHEREAS Winnipeg is a multicultural, socially diverse, and inclusive city that is home to many different faiths, religions, genders, languages, and cultures;

AND WHEREAS Winnipeg takes its role as a human rights city and the home of the Canadian Museum for Human Rights seriously;

AND WHEREAS Government has an important role in protecting our shared values of tolerance and diversity;

THEREFORE, BE IT RESOLVED that Winnipeg City Council oppose Quebec’s Bill 21, and support in principle, the constitutional challenge to Bill 21, and continue to support building a welcoming city where everyone has access to opportunity and prosperity.