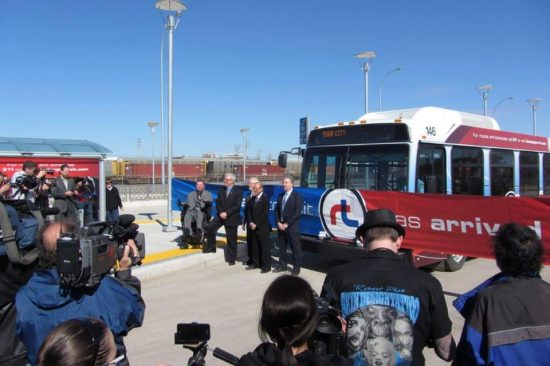 For the past few weeks, since we’ve entered this new realm of COVID-19 , I’ve shared my concerns about implementing high frequency transit delivery vs a reduced service of the new Southwest Rapid Transit Corridor with the Mayor, CAO and Chair of Finance. Now I’m going to share them with you.

Less than 5 business days ago, on April 3rd, City Council held a special meeting of Council to:
• declare a Local State of Emergency,
• delay payment of business and residential taxes,
• review a report projecting the City to lose over $50 million in lost revenue if the pandemic went on for the next 90 days-till the end of July, 2020.

The report identified governments throughout the world are being impacted as City revenues and cash flows drop – while at the same time, trying to protect and maintain essential services.

It’s a momentous day. Love it or hate it, support the route or not, it’s the City’s largest transit project that is now complete. I love it & I’ve supported it for years*.

The new spring transit schedule was announced on Wed. April 8th. I read though it & thought I was reading something incorrectly. I spoke to the Director of Transit, who confirmed the new transit corridor, would be operated at full weekday and weekend services – as planned.

No reductions at all – no reduced schedule – but instead full out high frequency that had been in the planning for months.

In the same conversation, the Director also confirmed transit ridership City wide is down 70%. We know the University of Manitoba has suspended classes and students /staff were are not travelling to the U of M.

And while some of these Cities have since added a bus here or there to routes to enable physical distancing-they all have reduced transit because ridership has dramatically dropped.

I’ve expressed my concerns to the Mayor, CAO and Chair of Finance – of seeing absolutely no logic in launching a high frequency transit service, to a University that is closed, and when there is a 70% decline in transit ridership.

Why not an enhanced Saturday schedule?? or some kind of reduced schedule – vs full out high frequency??

(and again – how the world has flipped upside down, as I find myself saying: don’t go to playstructures, don’t gather with family and friends – and now – CUT transit service in the ward I represent !!! ??! )

But- It costs millions to run transit – and especially a high frequency service.

We should not be launching a high frequency – full out all route / all schedule transit service – when as a City – we are going to have to do all we can to protect and maintain essential services.

I’m not sure what logic I’m missing here – but what I do know, is the lack of fiscal responsibility from those at a higher up decision level than I -terrifies me.

For years prior to being elected, I’d been very involved in ‘encouraging’ the City of Winnipeg to advance investments in active/sustainable transportation.
· In 2009, the City of Winnipeg appointed me to the Southwest Rapid Transit Phase One advisory committee. I’ve always been a huge supporter of transit – have been for years – and still am. Saving the U-Pass was the latest round of support!
· In 2014, I campaigned on finishing Phase Two of the corridor, and completing the connection to the University of Manitoba, the second most commuted to destination in the City of Winnipeg, next to downtown.

But more than anything – I want to shed tears at the lack of fiscal responsibility I am seeing, in the middle of a global pandemic – that won’t be over in 90 days – and that we as a City should be scrimping every penny to maintain and protect essential services.