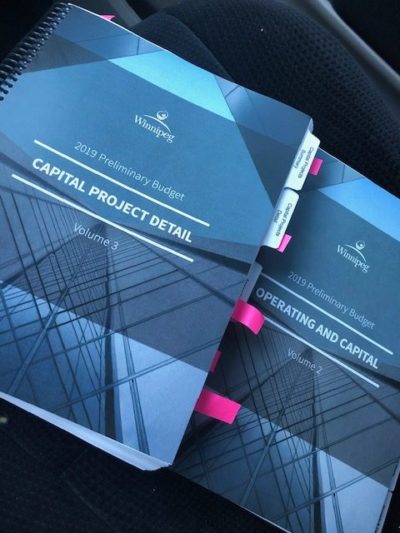 Today Councillor Klein and I called a press conference with media to express our concerns with the City of Winnipeg’s 2019 Budget Process. You can read my statement below – and read Councillor Klein’s statement.  I must say, it is virtually impossible to ensure an intense review of tax dollar expenditures in the budget when Councillors have not been part of the budget working group (Mayor, Deputy Mayor, Acting Deputy Mayor and Mayor’s appointed Executive Policy Committee) who took 6+ weeks to craft the 2019 budget.  The budget contains many positives, and contains some disappointments, but it does not contain enough critical detailed information reflecting how and why tax dollars are being allocated in certain ways – that someone can review in 12 days.  How in good conscience can I or my colleagues who were not on the budget working group – representing virtually half the citizens in Winnipeg –  vote on a budget we have not been able to properly scrutinize?  I will be posting more on the budget in the coming days.

I welcome any comments you may have: jlukes@winnipeg.ca

The 2019 budget process presented to us in this new term is reflective of the same budget process of years gone by, but this year is even more restrictive in the time allocated for the Citizens of Winnipeg and Councillors not on the budget working group.

Councillors not on the budget working group and citizens have 12 business days, 12 business day to scrutinize a $1.24 B budget. See Proposed 2019 Budget

The non-budget working group Councillors represents almost half the citizens of Winnipeg, 320,000 citizens. Citizens expect their Councillors to be accountable to the investments of their tax dollars and be able to conduct an intense review of tax dollar expenditures in a budget.

Citizens expect their elected Councillors to have equal representation in the budget process.

Councillors not on the budget working group:

I’ve been able to organize and to secure a two hour meeting with the Chief Financial Officer for non-budget working group Councillors on March 6th. This meeting will take place this afternoon – the day before the public service starts presenting detailed budgets to Standing Policy Committees for review. A two hour meeting – to scrutinize a $1.124 B budget.

I called for a civic governance review – as we hadn’t had one in 20 years.  In over a year, there has been virtually no movement on this file.

Citizens elected us to represent their interests and make positive change to many processes. There has not been equal representation of elected officials in this budget process and Councillors have not been provided adequate time to review.

How in good conscience can I or my colleagues, representing virtually half the citizens in Winnipeg vote on a budget we have not been able to properly scrutinize?

In the coming weeks I will be bringing forward Notice of Motions to Council where we can debate what equal representation to the citizens of Winnipeg means and proposals on how we can achieve it.

Citizens have elected me to work towards positive change and I will continue doing just that.