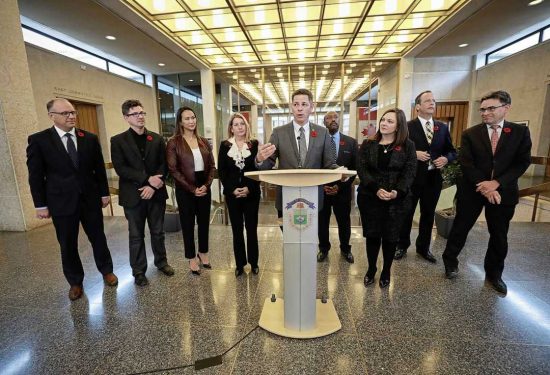 When Mayor Bowman speaks about ‘openness and transparency’ at City Hall – please reflect on this article, to accurately understand what ‘open and transparent’ means under this leadership;

Brian Bowman was an outsider in 2014 who won the mayoral race with a promise to democratize Winnipeg city hall, creating policy through what he said would be an open and transparent decision-making process.

Two short years later, secrecy and secret meetings became the watchword, the democracy pledge long-forgotten, and, by the end of 2019, Bowman had become known across the country as the “strongest mayor” in Canada in a city without a municipal party system.

Ironically, Bowman achieved his unofficial title by inverting his original democracy pledge: instead of freeing up appointments to the mayor’s inner circle (executive policy committee) through an open vote on council, he created a voting majority of council with what’s become known as EPC+2.

Bowman continues to appoint members to EPC (the chairs of council’s standing committees) but he tightened his grip on city hall in late 2016, when he invited two other councillors to regularly attend private, closed-door meetings — confidential sessions where the group would be privy to exclusive briefings from department heads, budgets would be developed, and in advance of all council meetings.

“Those closed-door meetings would likely be illegal in Ontario,” said Andrew Sancton, a retired political sciences professor at the University of Western Ontario, who specializes in municipal government. “The idea that those kinds of informal meetings are happening, inside city hall, with senior staff present… In relation to Ontario, it’s shocking that those kinds of meeting happen.”

In 1989, the mayor was given the authority to appoint all EPC members from among the 29 councillors but membership was restricted to seven members, including the mayor. EPC membership remained at seven when council was shrunk in 1992 to 16 members. With the Charter Act in 2002, the membership wording was changed to less than 50 per cent of council.

Membership on EPC carries with it prestige, power, exclusive access to information and, today, a $23,000 bump in pay over non-EPC councillors.

The framers of the legislation knew it combined to give the mayor a great deal of leverage, but put a limit on that power by restricting the membership to less than a majority of council (seven members, including the mayor).

Unlike provincial and federal politics, where a majority government guarantees the governing party can pass whatever legislation it wants by the strength of sheer numbers, the legislation deliberately avoided creating a party-like governance model at Winnipeg city hall. With only six additional votes to that of the mayor, the legislation forces Winnipeg’s mayors to work with other members of council to secure a majority. Bowman’s move to create the unofficial EPC+2 changed that, creating the potential for a nine-vote majority on the 16-member council.

“Assuming he has these people onside and he’s giving them incentives, it means the mayor is in a good position to get what he wants on city council,” said Christopher Leo, a senior scholar at the U of W’s political science department. “Bowman is not acting within the spirit of the legislation.

“It’s quite clearly a way of circumventing the intention of the act and creating an inner circle, a majority of council, which gives him a much better chance to control what council does.”

In March 2016, a group of six councillors lambasted Bowman for how the EPC had developed that year’s draft budget without any input from them. Front and centre was Couns. Cindy Gilroy and Matt Allard, who demanded a more collaborative approach to decision-making at city hall.

In October of 2016, Bowman appointed Gilroy to EPC and then established the “+2” concept by giving the title of deputy mayor to Jenny Gerbasi and acting deputy mayor to Allard — and inviting them to attend many of EPC’s closed-door meetings.

Previously, mayors had always assigned the role of deputy mayor to an EPC member, in addition to their work as a committee chair.

The Free Press filed access to information requests for the calendars of several councillors for portions of a three-year period, which revealed, for the 12 months of 2017, Allard and Gerbasi met 60 times with Bowman and EPC members in private, closed-door meetings in Bowman’s office.

They attended early-morning meetings with EPC in the mayor’s office ahead of every regular monthly meeting of council, and ahead of the special council meeting Dec. 12, when the budget was voted on. The two met several times each month with EPC, generally following every regular weekly EPC meetings, where they would be briefed by various department heads and regularly with just other EPC members alone.

With the October 2018 election and departure of Gerbasi from council and the promotion of Allard to EPC, Couns. Markus Chambers and Vivian Santos became the “+2.”

Between Jan. 1 and Oct. 22, Chambers (deputy mayor) and Santos (acting deputy mayor) met with EPC 58 times, in similar settings that Allard and Gerbasi had been attending for the previous two years.

Bowman denied he was doing anything unethical or illegal by inviting two councillors to meet regularly with EPC, explaining he doesn’t see it any different than when other members of council get together to discuss issues.The mayor said people shouldn’t attach any significance to the fact EPC+2 has been meeting several times a month for three years and when they meet.

“We follow the legislation and do the best to provide the leadership that’s required of us,” Bowman said, adding it’s important to distinguish between informal, private meetings of the nine-member EPC+2, and the formal meetings of committees or council, where minutes are kept and motions approved.

“We (EPC+2) do meet regularly, absolutely, but it’s important to recognize these are not formal meetings,” he said, adding no decisions are made that can affect city hall without council’s approval.
“I certainly don’t complain when members of council are meeting with the public service or with each other.”

“It’s always problematic when you have unrecorded meetings of these groups. It’s not very transparent,” Moore said. “There is no reason to include these two individuals in all the meetings.

“It seems like he always wants to ensure that he always has that voting block to get things through.”

Sancton, author of the authoritative text Canadian Local Government: an Urban Perspective, which has several sections on the evolution of municipal government in Winnipeg, said he supports the concept of an executive policy committee.

He said Winnipeg’s model gives its mayor more power than almost any other peer in the country because the mayor appoints all members to a committee that has been mandated with so much power over council.

Sancton said Bowman tipped power even more in his favour when he invited two other councillors to attend informal meetings.

“I don’t know why there would be briefings by staff to some councillors and not to others. The staff have an obligation to brief all of councillors,” Sancton said. “Those kinds of meetings would really violate norms in Ontario, if not violate legislation.

“The staff is supposed to be working for the whole council, that’s the whole basis of municipal government. If you’ve got an EPC, there’s nothing wrong with staff interacting with EPC, but it’s got to be at duly constituted meeting, not just a bunch of people sitting around a table.”

The Free Press filed access to information requests (Freedom of Information and Protection of Privacy Act applications) for the calendars of several City of Winnipeg councillors for portions of a three-year period.

— 29 of these meetings were held in January, February and early March, in the lead-up to the 2019 budget.

— Chambers and Santos were invited to join EPC to attend special briefings from the administration in April for a labour relations update and in May, for a briefing on public transit service for IG Field.

— Chambers and Santos were invited to early-morning meetings with EPC in the mayor’s office ahead of every regular council meeting from January to September, and the special council meeting March 20, where the budget vote occurred.

— Chambers and Santos were invited to the mayor’s office two to three times a month to meet with EPC members following the regular EPC meeting, often meeting amongst themselves, and then later for special briefings from various department heads, and then meeting again alone with EPC members.

— Gerbasi and Allard were invited to early-morning meetings with EPC in the mayor’s office ahead of every regular council meeting from January to October.

** — Morantz resigned from EPC in June, and was replaced by Allard, who became a legitimate member of EPC. Gerbasi continued to meet privately with EPC: six times in June, five meetings in July, four meetings in August and three in September.

— Allard and Gerbasi were invited to early-morning meetings with EPC in the mayor’s office ahead of every regular monthly meeting of council, and ahead of the special council meeting Dec. 12, when the budget was voted on.

— Allard and Gerbasi met several times each month with EPC, generally following every regular weekly EPC meetings, where they would be briefed by various department heads.