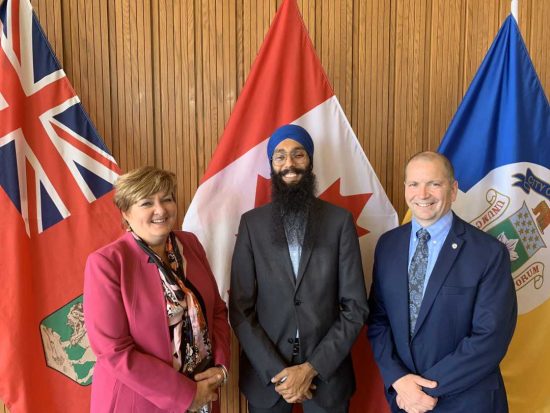 Thank you to the Winnipeg Free Press for covering this very very important issue.

Members of city council voted unanimously Thursday to condemn a Quebec law that prohibits some public-sector employees from wearing religious symbols while at work.

The motion had been proposed by Couns. Shawn Nason and Janice Lukes, who manoeuvred a series of votes at the start of the meeting to get the issue onto the floor of council for a vote.

Lukes told council the vote was necessary to support the city’s ethnic communities and to assure them that similar legislation would not be allowed to pass in Manitoba.

“Our city, our province and our country, is enriched by the multicultural tapestry that is Canada,” Lukes said. “As a city, I believe we need to stand up and send a message not only to minority communities but to the entire country — Winnipeg is a city that stands firmly to support religious freedom.”

Winnipeg joins a handful of other municipalities across the country that have passed resolutions condemning the Quebec legislation, known as Bill 21.

The vote was preceded in council’s morning session by appeals from 11 individuals — all but one a member of the city’s Sikh or Muslim community.

“This motion is an opportunity to firmly take a stand against discrimination and send a strong message that Winnipeg does not support laws that create a space for intolerance,” Simarpreet Singh, a member of Sikh Heritage Manitoba, told council.

“Our fellow Canadians are once again felling marginalized and need to hear from leaders like you that you stand shoulder-to-shoulder with your fellow citizens against the discrimination sanctioned by Bill 21.”

Idris Elbakri, president of the Manitoba Islamic Association, told council that their words and actions make a difference in people’s lives.

“Faith is not a threat to secularism in Canada,” Elbakri said, adding Bill 21 is an example of “extreme secularism threatening people’s ability to practise and express their religion and that’s something that violates their fundamental human rights.”

Elbakri said there are many white people in Canada who do not understand and fear people of colour and their religious practices.

“I hope you’ll make a statement today that we will not be defined by fear,” Elbakri said.

Supporting the motion, he said allows Winnipeggers to show “we will be defined by friendship, by being allies and neighbours with each other.”

Words of strongest support for the motion were made by Mayor Brian Bowman during a question-and-answer session with reporters during the noon-hour break, where he described Bill 21 as “grotesque.”

“Many Canadians not only find it offensive but revolting that in this day and age, identifiable and visible minorities could face such discrimination in a country like Canada,” he said.

“I’m expecting council to be very clear in its condemnation.”