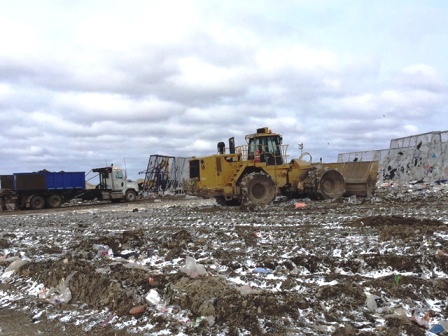 On April 21, 2015, in honour of Earth Day, I took a tour of the Brady Landfill, now officially called the Brady Road Resource Management Facility. This towering mountain is close to home for all South Winnipeg residents, but I wonder how many have ever actually driven into the site. I encourage you to do so, and especially take any young people you may know, take your children, take your partner or spouse.  I’ve been to Brady multiple times over the years, and every time it seems like a brand new experience. While photos say a thousand words, they lack the movement and the sounds, and simply cannot convey the size and volume of the landfill.  Hundreds of seagulls, massive huge machines moving garbage, the movement of papers and bags blowing in the wind, and the aroma. And knowing it will continue to grow at this site for the next 100+ years. Quite a moving experience. Here’s a chance to see a virtual tour.

Brady has been the City of Winnipeg’s sole landfill since 1998.  Some interesting facts:

While these facts are quite astounding and rather daunting, there is a lot of good work being done by the City with respect to environmental site improvements and overall waste reduction.  As an example, in 1993, 355 kgs of waste (per person) went to Brady Landfill.  By 2013, this amount was reduced to 249 kgs, a decrease of almost 30%!

Innovative processes and work are also underway to develop:

The City of Winnipeg has a master plan on dealing with waste as well as an informative website highlighting the many services provided. You can also learn more about how you can reduce your consumption, and increase recycling and reusing initiatives  from our friends at the Green Action Centre.

Reducing our overall consumption is key to keeping our planet vital, alive and healthy.   That’s why each year on April 22, the City of Winnipeg is proud to celebrate Earth Day, the largest environmental event in the world. More than 6 million Canadians participate in Earth Day activities within their communities!

“The City is proud to build a more sustainable and environmentally responsible Winnipeg,” said Mayor Brian Bowman. “I encourage everyone to take a few moments to consider your impact on the environment today – even doing something small like turning off the lights when you leave the room makes a big difference.”

The City of Winnipeg is committed to green initiatives all year round. The following are some of the many plans and programs that the City undertakes to help build a more sustainable and environmentally responsible Winnipeg:

Sustainability in City Operations and Programs