Gas Collection System at Brady Road Landfill to be Expanded 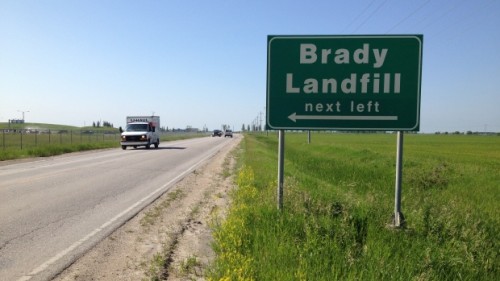 The landfill gas collection system at the Brady Road Resource Management Facility (Brady Road Landfill) will be expanded this summer, as required under section 15 of The Climate Change and Emissions Reductions Act.

The system at Brady collects and flares landfill gas, which is produced when organic waste decomposes:

After the expansion, the City will be capturing DOUBLE the amount of landfill gas, equivalent to emissions produced by over 44,000 passenger cars.

Construction will start the week of July 17 and is expected to be completed the week of September 25.  Activities will include drilling 24 wells and installing 3,500 metres of piping. The work may temporarily cause odours within ¼ mile radius of the landfill site as old garbage is exposed during construction.

The Brady Road Resource Management Facility has established a process to identify sources of odours.  If residents have any odour concerns or questions, please contact 311:

My thanks to CBC News for reporting on this story.

The City of Winnipeg plans to collect more methane at the Brady Road landfill, but has no immediate plans to do anything but flare off the gas.

The city started capturing methane at its sprawling garbage dump and flaring off the gas in 2013, both to reduce odours emanating from the landfill and reduce greenhouse-gas emissions. Methane, produced by organic waste as it rots underground, is far more potent as a greenhouse gas than the carbon-dioxide produced by flaring.

The city installed 42 gas wells in the landfill in 2013 and now plans to add 22 more this summer, plus another two dozen next year, as part of a $4-million methane-capture expansion.

The pipes slated to be installed this summer will be placed in the active portion of the landfill, where garbage is still being added.

“If the gas is not collected in this cell of the landfill, objectionable odours will be experienced by the nearby neighbourhoods from the active filling area,” the city states in its 2017 capital budget.

“The area that we’re working on right now was just completed in terms of its landfilling activity within the last month and a half. So as we move the landfill along and progress through our site, we will continue to add more phases of this wellfield project,” said Dan DeCraene, the operations superintendent for Winnipeg’s solid-waste division.

The city is required to capture this additional methane. Under the terms of a provincial environment license, the city must collect the flammable gas before it burps out of the ground in an uncontrolled manner, an event that could pose “public health and safety risks,” according to budget documents.

The province also requires the city to collect methane as a means of combatting climate change. Even with methane capture, Brady Road remains the second-largest single emitter of greenhouse gases in the province.​

The cost of the gas-capture expansion is $4 million over the next two years. This figure does not include the potential for using the methane as a heating source instead of flaring it off.

“We are still in discussions with partners that could bring us to that point where we eventually do use this product — this methane gas that we pull out of the landfill — for an energy conversion of some sort,” DeCraene said. “Our intent was to design this system so that we could move to an energy conversion at some point.”