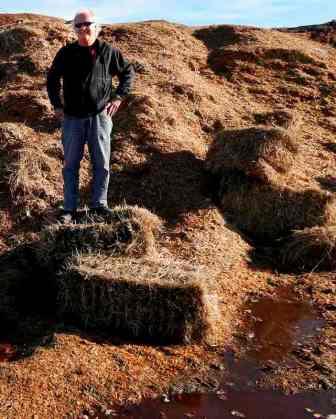 A controversial garden supply company that was forced to leave its McGillivray Boulevard location because its operation was deemed a foul-smelling nuisance is back in business and in hot water.

Samborski Environmental Ltd. is embroiled in a legal dispute with the RM of Macdonald over its new location on Brady Road south of the Perimeter Highway and some city residents are once again complaining about the smell and rodents it’s attracting.

“I’m getting a ton of calls that his place stinks,” said area Coun. Janice Lukes. “I did a walk through last weekend — it just reeks. People are dumping garbage there.”

Winnipeg Coun. Janice Lukes (South Winnipeg-St. Norbert) is providing area residents upset with the Samborski compost operation with a complaint form available on her website, which residents can fill out and will be automatically forwarded to Manitoba Conservation.

Provincial officials raided Samborski’s McGillivray Boulevard location in February, 2015 and carted off tonnes of foul smelling organic compost, which had been irritating residents of the nearby Winnipeg suburban neighbourhood of Whyte Ridge.

The province had received more than 500 complaints about excessive odour against Samborski between 2010 and the start of this year. In 2013, the province issued an environmental order to have the compost material removed and ultimately was forced to remove the material itself.

Following the raid, Samborski re-established its compost operation on 10 acres of land about five kilometres to the south — still in the RM of Macdonald, on Brady Road opposite the city’s landfill operation.

The RM maintains Samborksi is operating illegally at the site, and is awaiting a court ruling on an injunction to shut the compost down.

Meanwhile, Samborski’s application for a permit from Manitoba Conservation has also been repeatedly rejected, on the grounds that it’s an illegal operation.

Co-owner Lenn Samborski said he’s done nothing wrong at the Brady Road location, adding that the RM and the province are refusing to acknowledge he’s legally operating under the terms of a development agreement from 1990.

Samborski said he can’t believe anyone would complain about the smell from the 10-acre compost site when his neighbour across the road is the city-owned, 2,200-acre landfill.

“Our operation is a pimple on the back of an elephant compared to the (Brady) landfill,” Samborksi said.

Samborski denies that he’s operating an unlicensed garbage dump — but did admit that someone illegally dumped a truck load of garbage at the site shortly after noon on Monday, without his permission — paint cans and roofing shingles. “But, that’s beside the point.”

Samborski said he’s operating the same type of operation as he had on McGillivray — a compost site with organic kitchen waste from area restaurants that he converts into soil compost and sells to gardeners.

Samborski admitted that he does accept concrete, which he breaks down for road material, and clean recyclable and reusable material.

Lukes said she’s frustrated with the situation and fears Samborski will run circles around local and provincial officials in a repeat of the scenario that played out over several years before the province took action in February, 2015.

“It’s unbelievable the province is allowing Samborski to operate without a license and allowing the site to become a general dumping ground,” Lukes said. “Samborski is operating illegally and the Province should shut him down.”