Bohémier House Gets a New Lease on Life 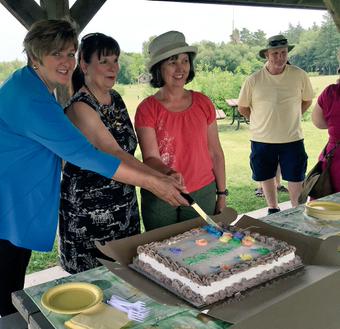 A long-standing heritage home and important piece of St. Norbert history has been revived.  The Bohémier House in the St. Norbert Provincial Heritage Park reopened to the public for the first time in six years on July 11. The date also marked the 30th anniversary of the home’s first opening to the public in 1985.

Most of the artifacts in the Bohémier House are property of the Fort Garry Historical Society and are original to the early 1900s. Pictured is the home’s parlour.

“It’s really exciting,” said park interpreter and Fort Richmond resident P.J. Anderson. Anderson has worked in provincial parks for six years and got her first glimpse inside the historic home earlier this month.   “It’s never been open in that entire time. I used to volunteer for the ghost hike and do all sorts of things, but I’ve never been able to come into this house,” she said.  “I’ve seen pictures, but it’s still not the same as being in here. It’s kind of a big deal.”

The Bohémier House was closed to the public about six years ago due to the discovery of asbestos in the walls. According to a provincial spokesman, the total cost for the Bohémier House renovation (including remediation and materials for new siding) came to approximately $250,000, not including staff time that was dedicated to the project.

“Because this is a heritage home, we had to have the heritage engineers, the heritage carpenters using the appropriate tools, making every single piece the way they would have made it 200 years ago — so it was kind of a process,” said Anderson.

In 2012, the process to remove the asbestos was started and involved removing the cancerous substance by access from the exterior of the building in order to reduce the impact on the interior.  The project was completed in early 2013, and the house was temporarily protected from the elements with plywood. In late summer 2014, the exterior siding was completed.  Final restoration touches were completed this spring and a grand reopening celebration was held on July 11, 2015. Approximately 150 people attended, including members of the Bohémier family.

According to Fort Garry Historical Society acting president Kathy Stokes, the home is an critical part of St. Norbert’s history.  “We are very pleased that it’s open,” Stokes said. “It’s important because it’s the actual home of a French-Canadian pioneer family in Manitoba.”

Built in 1888, the Bohémier House was home to French-Canadian pioneers Benjamin Bohémier and his wife Marie-Louise, from Ste-Anne-des-Plaines, Que. The family had over a dozen children and many worked on the farm, raising cattle on river lots 104 and 105 in Fort Garry. Descendants of the Bohémiers lived in the home, without running water or formally wired electricity, until 1973 when the land was purchased for an apartment.

The home was relocated to the heritage park, restored to its 1900s glory, and opened to the public.

Many of the artifacts in the home, including a Gobelins tapestry, are original and owned by the Fort Garry Historical Society.  The purpose of the home is to remind the public that French-Manitoban and Métis culture are still thriving and active, said Anderson.  “Most of the homes we have here are trying to show you a time and place,” she said. “It gives you a snapshot into the lives of the people who lived in St. Norbert 150 years ago.”

The Bohémier House is open for tours Thursday to Monday from 10:30 a.m. to 5:30 p.m. Special programing is also available in the afternoons and evenings. For more information, go to manitobaparks.com or call 204-945-4236.