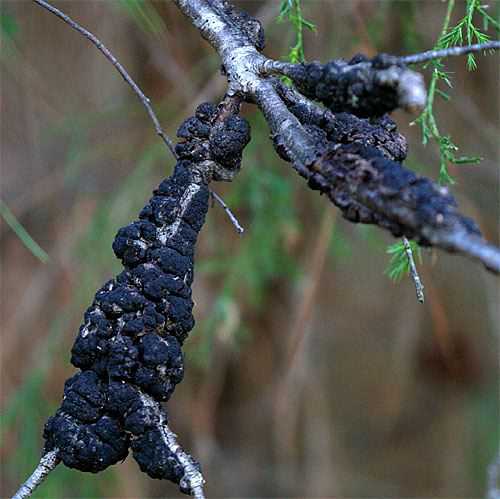 Two city councillors are trying to engage the public in the fight against a deadly fungus that disfigures and eventually kills trees.   St. Vital Councillor Brian Mayes and St. Norbert Councillor Janice Lukes held a townhall meeting Monday evening to discuss the city’s plan to deal with black knot, a fungal disease that affects the city’s chokecherry trees.

Black knot appears as an ugly, dark, knotted swelling along the branches of infected trees. Some trees such as maple and Russian olive are immune, which Lukes said the public needs to be made aware of.

“Nurseries can sell whatever they want, but people need to be educated. It (chokecherry) is a beautiful tree, so I understand why people want to buy it, but there is this prolific disease out there that is going to get it eventually,” Lukes said.

The meeting Monday at Collège Jeanne Sauvé in St. Vital aimed to educate residents on how to deal with the fungus and stop it from spreading.

Lukes said almost 8,000 trees in the city have been infected and pruning off the knots only prolongs the tree’s life — the fungus eventually kills it.

“We need to share with the public what we can and cannot do to deal with the trees,” she said. “A lot of people prune them off, but really once the tree gets it, it has got it.”

Pruning can also spread the disease if the tools are not properly cleaned and sanitized.

A tree on city property can’t be removed by a resident. It must be professionally removed at the resident’s expense, with the city’s approval.

The city has the budget to remove about 200 trees a year, Lukes said.

“With the current funding level, it is going to take 39 years to remove and replace all these trees,” she said.

Republished from the Winnipeg Free Press print edition May 26, 2015 A6