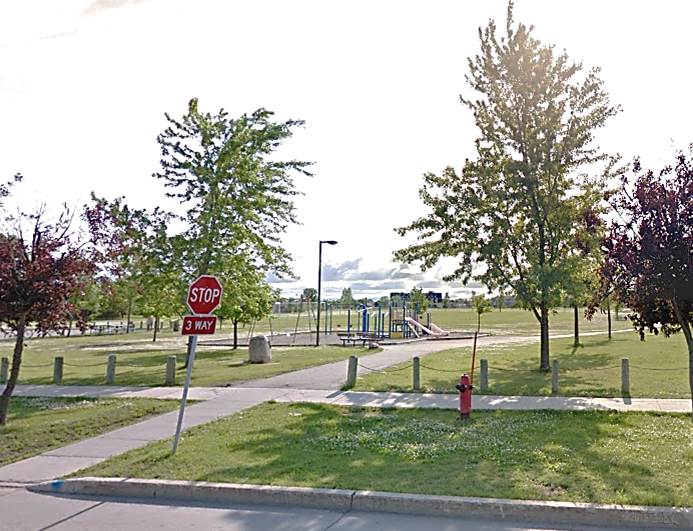 I’d like to thank Marla, Secretary of the Richmond West Neighbourhood Association (RWNA), for providing the very accurate notes (shown below) from the meeting which I hosted on April 26, 2016.  I would like to elaborate on a  few additional points:

Shortly after I was elected in 2014, one of the first projects I initiated was to understand which upgrades the community would like to see occur in Kirkbridge Park. It was during this process that I discovered the fence project. For the 2016 construction season, I am allocating the following City funding into Kirkbridge Park:

There are many other needs for the Park that the community has been discussing. The City Parks Department and I will work with RWNA to develop a long term investment plan based on community priorities.

Marla’s notes (shown below) explain the background behind the fencing and the efforts to compromise.  For more details on WHY the fencing is required, please SEE HERE.

The decision was made to install a 4’ high fence vs a 6’ high fence. The South Winnipeg Community Center and I have made the commitment to meet with RWNA annually to discuss and resolve any concerns related to the baseball diamond and fencing.

I am also setting aside some funding in a ‘Fence Removal Trust Fund’ to cover the costs of removal of the fence when a new diamond is constructed at the new Recreation Complex. I will be working through details of the Trust Fund with the Parks, City Finance Department and RWNA.

An amount of $350,000 has been allocated for planning, research and a Class 5 estimate for the new Recreation Complex. This project is well underway and an update will be presented to the community on June 13th at the South Winnipeg Recreation Centre’s AGM:  REC COMPLEX UPDATE  It is well recognized that South West Winnipeg has a severe shortage of recreational facilities.

I am very aware the fence is not wanted by everyone, and also painfully aware that the City has a difficult time communicating, both internally and externally. I am asking for your support and patience while this fence is up to allow children and adults to enjoy the park safely.

As many of you know, a meeting was held yesterday by Janice Lukes to provide an update on Kirkbridge park.   In attendance at the meeting were representatives of the SWCC, the City of Winnipeg Parks, Janice Lukes, and myself as the representative of the RWNA. Janice provided some background history and updated the community on different initiatives within Kirkbridge park and surrounding area.  Janice announced that some monies have been set aside in the city budget to help refurbish the park.  Much of the meeting focused around the proposed fence for the Sandusky baseball field.

SWCC applied to have a fence erected around the baseball field last June which was approved by City of Winnipeg Parks, without consultation to the residents of Richmond West.  The objective of the fence was to prevent unwanted intrusions on to the baseball field while organized games are in play.  The SWCC is also looking to enhance the calibre of baseball offered to kids 16&U and 18&U.  The RWNA had objected to the proposed fencing on the basis that there was no previous consultation with the residents of Richmond West.  The fence disrupts the open flow of the existing field which allows for other sports and activities to take place when games are not being played.  Many residents that back onto the park and face the baseball diamond have expressed their strong dissatisfaction regarding the proposed fence as it is obtrusive and aesthetically unpleasing.

Last fall, Janice Lukes had proposed that a temporary seasonal fence be placed until a more preferable baseball site can be obtained to host larger calibre games.  Janice had approached SWCC and the City of Winnipeg Parks on this matter.  When the proposed temporary fencing was investigated, the City of Winnipeg Parks declined the proposal as the temporary seasonal fencing presented a safety hazard and a logistics issue.  Janice had requested that the fence be altered from 6 feet to 4 feet to reduce the visibility of the fence and that it be considered a temporary fence, only to be removed once a baseball diamond that supports 16&U and 18&U can be established elsewhere.

Janice is willing to set up a trust to have money set aside to have the fence removed in the future, provided that a new community recreational centre can be built to accommodate the appropriately sized baseball diamond.  The City of Winnipeg Parks is also willing to plant shrubs and trees around the fence to obscure the site of the fence.  The RWNA is disheartened by this decision as it is seen as a compromise for an issue that was never properly addressed with the residents in the beginning.  The City of Winnipeg Parks representative acknowledged that residents should have been more properly informed of the proposed change and agreed to consult with the Richmond West residents and the RWNA on any other proposals regarding Kirkbridge Park.  However, the City of Winnipeg Parks and the SWCC plan to proceed with the temporary fence at a 4 foot level height with three separate openings to allow for easier access for the public when the field is not in use for organized sports.

Both RWNA and residents expressed concern that this fence will be permanent and that there is no intention to remove it in the future.  Planting trees around the fence may only help perpetuate this thought and may hinder the removal of the fence.  The RWNA would like to have a meeting with the community to determine if residents are in agreement to planting trees and shrubs around the fence.  The RWNA would also like the residents whose yards back onto the park directly facing the fence, have the ability to indicate placement of a tree or shrub that will help obscure the view of the fence, should they so desire.  The RWNA also stated that we would like a specific time frame and date for the removal of the fence.  The City of Winnipeg Parks representative and the SWCC representatives were in agreement to consider these options.  The SWCC plans to resume completion of the fence within the next two weeks with the proposed changes. The RWNA will be looking to host a community meeting on Wednesday, May 18th, 7:30 p.m. at the Bairdmore School Library to provide an update on the initiatives set for the park and other RWNA activities.  Unfortunately, the fence is proceeding with some alterations. However, your input as to the desire of shrubs and trees to help obscure the view of the fence will be requested, as well as your input on other priorities for the park, such as lighting and washrooms.

On a more positive note, the RWNA is encouraging those residents of Richmond West who are contemplating having a garage sale, to do so on Saturday May 7th (8:30 – 3:30).  Having a Richmond West Community Wide Garage/Yard Sale will help attract treasure seekers from across the city and increase your chances of selling your gently used items.

In addition to this, the RWNA is encouraging residents to participate in a “Community Clean Up!”  Kudos to Jo-Anne Drewniak for spearheading this campaign.  We are looking for volunteers to assist in cleaning up the community boulevards, back lanes, and Kirkbridge park by picking up litter.  We will be teaming up with “Take Pride Winnipeg” and asking for as many volunteers that we can find to help with picking up debris left by the roadsides.  We will be meeting at 9:00 a.m. on May 14th in Kirkbridge Park Marrington Road Parking Lot.  We will be looking to clean up the park as well as the lane behind the Richmond West Plaza.  If you know of any other sites that need litter removal, please let us know and help us by lending a hand!  Please encourage participation!

Hope to see everyone out on May 14th.  Looking forward to hearing from you May 18th.