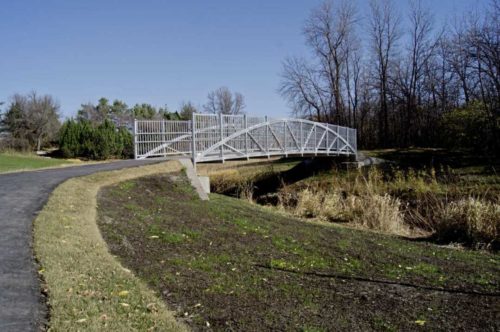 On October 14, 2017, we celebrated the unveiling of a new pedestrian bridge in King’s Park.

The bridge replacements are one of several capital improvements totaling about $2 million for King’s Park which is a regional park. Other improvements include recent riverbank stabilization, asphalt paths, new park furniture such as benches, picnic tables and fire pits. As well, the waterfall feature will be reestablished for the 2018 season.

As background information, I conducted a series of open houses in 2015 to gather feedback on what the community would like to see in the way of upgrades to King’s Park.  The City Parks department engaged a consultant to work through the feedback that was provided, and a final report was completed.  To learn more, click on these links:

A new steel bridge has been built at King’s Park, replacing the 30-year-old wooden structure that previously provided access over the pond.

The bridge was unveiled on Oct. 14 and is part of a capital improvement program at the park, totalling about $2 million.

Officials say the new bridge is universally accessible, have a wooden deck that can be replaced easily when needed, will be more durable and maintainable in comparison to the previous structure. A second new bridge is currently under construction on the south side of the pond and should be open in early November.

The bridges will also be painted in the spring to match the pagoda located in the park. Officials say the cost of replacing the two bridges is about $400,000.

“I’m pleased we were able to replace these landmarks and make these wonderful improvements to King’s Park,” South Winnipeg – St. Norbert councillor Janice Lukes said in a statement. “The new bridges, paths, and park furniture will last for many years to come for the enjoyment of the local community and all visitors to the park.”

PHOTO:  One pedestrian bridge in King’s Park has been replaced by the city and another is being installed at a cost of about $400,000. (DANIELLE DA SILVA/CANSTAR/SOUWESTER)