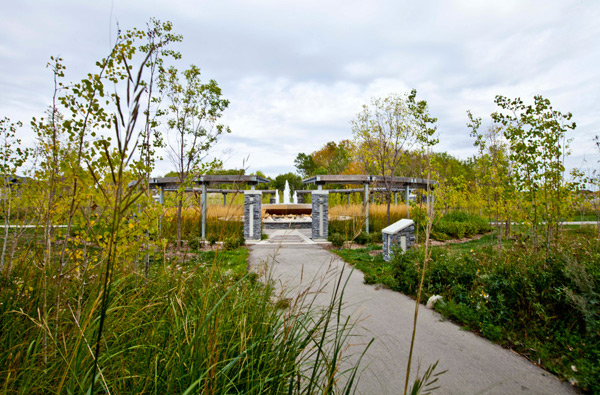 In the City of Winnipeg’s approved 2017 budget, there was no increase in funding for the City’s Parks & Urban Forestry department.  Rather, there was a decrease of approximately $200,000.

Many residents may also recall the media and information session I hosted regarding the poor maintenance of greenspace in the Neighbourhoods of Bridgewater.

Unfortunately, once again this year, the Mayor and the Budget Working Group did not support an increase in funding for Parks’ services.  I had many meetings on this topic and presented to the City Standing Policy Committee during the budget process, as outlined in the coverage below by Winnipeg Free Press.

This is extremely disappointing news and has a negative impact on ALL parks and park services across the City, but in particular, the maintenance of park space in the Neighbourhoods of Bridgewater.  It’s even more concerning that developers still take care of maintenance for a greater part of Bridgwater Lakes and Trails. Clearly, more funding will have to be allocated.

In 2016, I worked to secure a short term solution with Take Pride Winnipeg! to supplement very basic parks maintenance in the Neighbourhoods of Bridgwater. It’s not acceptable that a new community, which pays significant taxes, does not receive a basic level of parks maintenance. I encourage you to contact Mayor Bowman and share your thoughts with him: bbowman@winnipeg.ca

For more information, see the breakdown below, detailing the amount of funds allocated for a wide variety of services handled by the City’s Parks and Urban Forestry Department throughout Winnipeg: 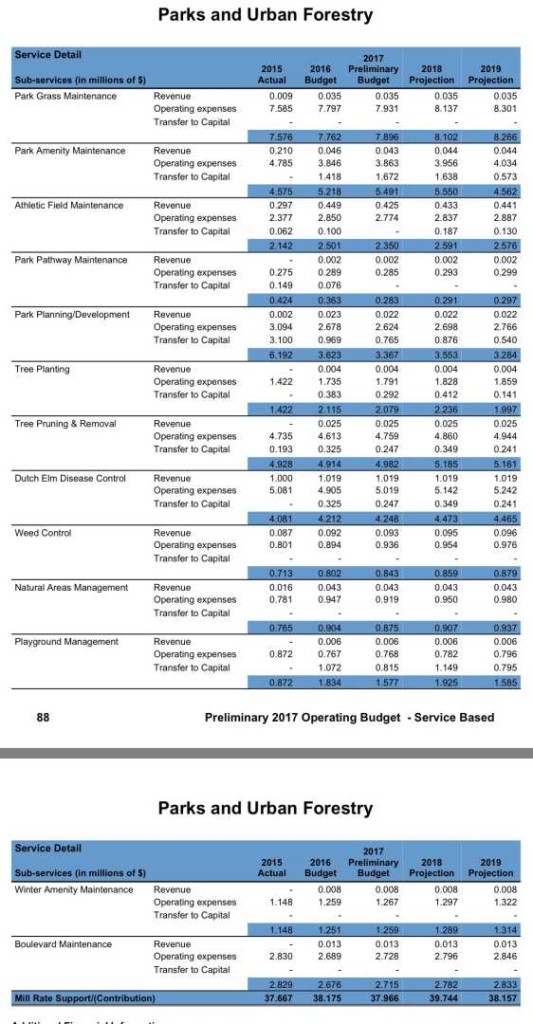 Winnipeg’s city parks division expects to spend another year struggling without an increase to its operating budget.

Parks manager Dave Domke said his division won’t get an increase in 2017.

“In 2016, the budget was $38 million and in 2017, it’s $37.9 million — relatively flat overall,” Domke told councillors on the protection, community services and parks committee that reviewed his division’s proposed budget for the coming year.

The parks budget has been essentially unchanged for three years.

In September, the committee endorsed Domke’s proposal for another $2.8 million in the 2017 operating budget and forwarded it to the budget process for consideration. As in previous years, it wasn’t approved.

The spending handcuffs placed on the parks division is startling. While there is a planned 3.8 per cent increase in total department spending from 2016 to 2017, none of that is allocated to parks.

In contrast, the increase to the police budget is 2.6 per cent (1.3 per cent adjusted); the fire paramedic service budget is going up 4.7 per cent; public works, 6.7 per cent; water and waste, 6.2 per cent; community services, 3.1 per cent.

“Parks are crucial to the quality of life of our city,” said Coun. Russ Wyatt, one of the four councillors who reviewed the division’s budget Friday. “It is so short-sighted for the city to underfund and cut our parks. Parks are infrastructure, too.”

An attempt by Wyatt (Transcona) and Coun. Ross Eadie (Mynarski) to increase the parks budget $700,000 annually for the next four years — to cut grass on boulevards — was blocked by Couns. Mike Pagtakhan (Point Douglas) and John Orlikow (River Heights-Fort Garry).

The problem facing the parks division isn’t new. In September, Domke told councillors requests for additional funds have been repeatedly rejected. His division lost 10 full-time staff from 2010 to 2015. The budget book shows there’s been another drop of 20 staff since 2015.

Suburban growth added 250 acres of new park space from 2010 to 2015, but his department doesn’t have the budget or the resources to touch a blade of grass in those areas. Domke said it would cost another $1.2 million for maintenance in the suburbs. There’s no money for that in the 2017 budget.

Coun. Janice Lukes complained to the committee Friday that the division is unable to maintain open spaces and boulevards in her south Winnipeg ward, demanding that the city needs to take a new approach to park maintenance.

Lukes said homeowners in her ward are paying property taxes that are three to five times higher than that charged to homeowners in other areas, yet they receive no parks services and few other civic services.

Domke did offer the committee some unexpected news. Capital spending for the department is set for $9.3 million in 2017, up from $8.3 million this year.