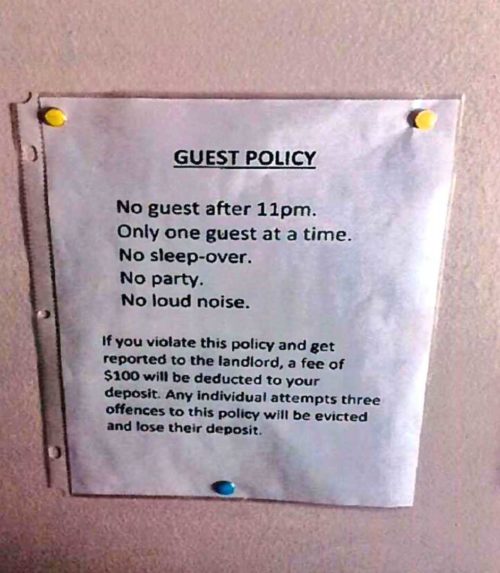 The owner of an illegal rooming house in a residential neighbourhood near the University of Manitoba campus was ordered Tuesday to remove locks from bedroom doors where seven students were found to be living.

Councillors on the community services committee turned down an appeal from the owners of the Grierson Avenue home, who claimed they bought the house for their daughter and denied the seven students were living there.

The hearing outcome pleased area Coun. Janice Lukes, who made the issue of tackling illegal rooming houses in the ward a priority during her first term on council.

Lukes said she’s worked with area residents and city staff on the problem and the results have been positive.

“We’ve aesthetically cleaned up the neighbourhood. We’ve educated the neighbourhood and the landlords,” Lukes (South Winnipeg-St. Norbert) said. “It’s been an incredible amount of work, but I’m really pleased with the results.”

Tuesday’s appeal hearing was only the second at the committee in the past four years involving an illegal rooming house from the predominantly single-family neighbourhoods surrounding the U of M.

There’s a shortage of student housing in the area and investors have taken to buying up homes near the university and illegally converting them into rooming houses.

During Tuesday’s appeal hearing, Coun. John Orlikow wondered if the fire inspection branch was being overzealous, noting that having several students living in one home didn’t necessarily make it an illegal rooming house. But Orlikow waived his concerns when officials said all the bedrooms in the Grierson house had individual locks on the doors and the doors were numbered.

The 1,010 square-foot home is a 10-minute walk from campus. When it sold two years ago, it was promoted as having six bedrooms: three on the main floor and three in the basement.

When the house was inspected by the Winnipeg Fire Paramedic Service’s fire prevention branch on March 2, there were seven occupied bedrooms in the house.

A representative for the owners said the decision to install the locks had been made by the students, who are from Vietnam and felt the need to have locks for security reasons.

In a letter to the committee, the owners said there were only four students living in the home, not seven: their daughter, two nieces and a friend of the girls.

The owners were given until May 3 to comply with the orders, when the home would be re-inspected.

Lukes said the street where the house is located is considered ground zero for the area’s illegal rooming houses as it’s the closest to the U of M campus and one with many illegally converted dwellings in the area.

Since being elected in 2014, Lukes helped the community organize a residents group, which conducted door-to-door surveys to track down rooming houses and set up a neighbourhood watch of sorts.

The bylaw was tweaked to prohibit the parking of several vehicles at one home (one of the tell-tale signs of an illegal rooming house), additional fire inspectors were hired and bylaw enforcement was ramped up.

Council in 2016 instructed the fire prevention branch to conduct annual inspections of rooming houses and to respond more quickly to complaints of bylaw violations and illegally converted dwellings.

Of the 84 bylaw inspections carried out on rental premises in 2017, 19 were determined to be illegally converted dwellings.

It’s difficult to determine the success rate of shutting down illegal rooming houses, as landlords are given a window of time to come into compliance and, Lukes said, noting the landlords frequently start up again.

One sign indicating success of the initiatives undertaken by area residents and city hall is the proliferation of lawn signs in English and Chinese promoting residential repair services and lawn maintenance, she said.

“The landlords know we’re out there and they know they need to do it,” Lukes said.

The lure for landlords to illegally covert their homes into rooming house should lessen as additional legal rental housing comes onto the market. Developers have recognized the housing shortage in the area and city hall has recently approved three large residential apartment towers for the area that will create an additional 700 units.