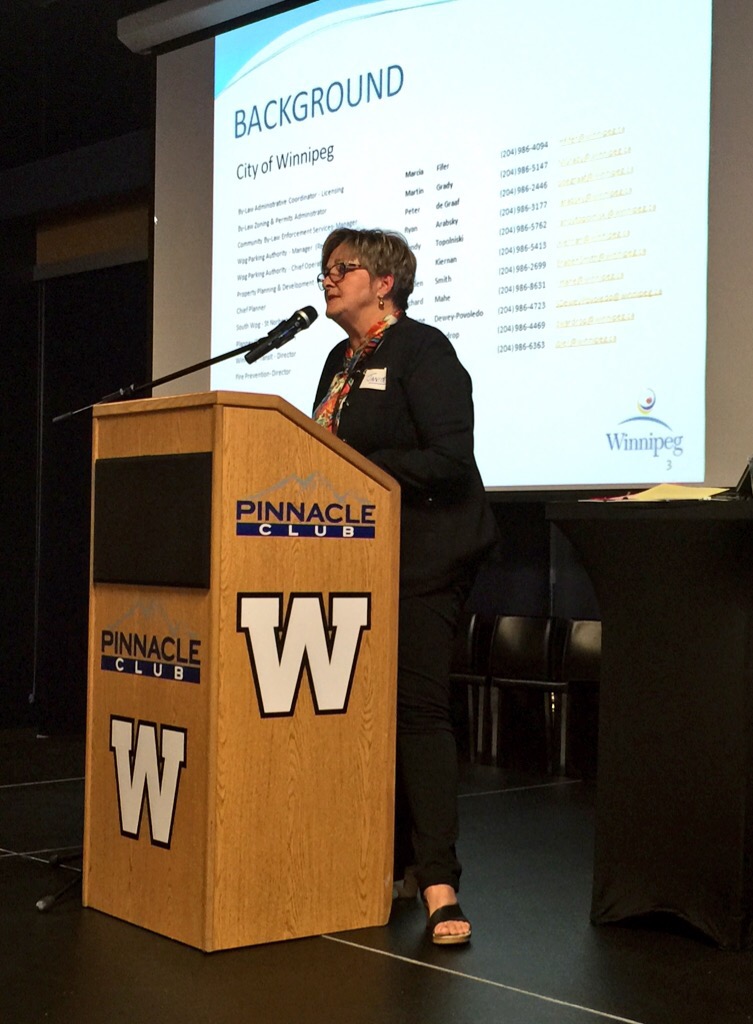 If the illegal rooming houses that have been sprouting up in neighbourhoods surrounding the University of Manitoba are to be weeded out, the effort has to come from the community itself. That was the message South Winnipeg-St. Norbert Coun. Janice Lukes delivered to a packed community meeting on campus last week.

Presenting an update on the issue of illegal and unsafe student accommodations to an at times raucous crowd of about 275 people packed into a room in Investors Group Field Sept. 30, Lukes said the problem can only be resolved through a partnership between residents, the city, and the U of M, but stressed the effort must be led by the neighbourhood.

“A lot of people, I know, aren’t happy,” Lukes told the Manitoban following the more than two-hour meeting that saw several presenters interrupted by the crowd.

“They wanted an instantaneous result but it didn’t happen instantaneously […] I think what [the residents’ advocacy] is doing is, hopefully, holding more folks accountable and it’s actually good because it’s making people consider becoming part of a stakeholder group and a residents’ group.”

An ad-hoc residents’ association will work to combat the growing problem of illegal rooming houses around the university, where restrictive zoning bylaws and high demand for cheap housing is leading many to convert single-family homes into multi-unit dwellings that violate the Manitoba Building Code.

The issue has been compounded in the last half-decade as the school works to increase recruitment of international students.

Lukes will co-chair the Stakeholders’ Rental Housing Association – which will include Fort Richmond NDP MLA Kerri Irvin-Ross and representation from the university, the student union, city staff, Manitoba housing, and realtors, among others.

But it’s the Residents’ Rental Housing Association that she said will give the neighbourhood an opportunity to take the reins in order to face the issue head-on.

“I’m not going to lead it,” Lukes said. “I’m going to support [the residents] and give them all the tools they need but they have to take ownership of their community.”

Fort Richmond resident Calvin Patrick, a former U of M student who has lived in the neighbourhood for nearly 10 years, attended the meeting and said he has seen the community deteriorate as houses are sold from families to absentee landlords.

“The neighbourhood is actually collapsing,” he said, noting cases of unkempt yards and houses with boarded-up windows as examples of owners taking advantage of lax bylaw enforcement.

“If it would be like a family renting a basement to one student, that’s not a big deal,” Patrick added.

“We’ve had that before, that was going on for years – then it kind of just winds through and blows up into something else.”

Additionally, a party lifestyle that Patrick argues should be confined to campus has sprawled through the neighbourhood, bringing with it broken bottles, people running through yards at all hours, and police visits.

“Anybody caught in between, you live in fear,” he added, “because you don’t know what’s going to happen.”

The City of Winnipeg’s By-law Enforcement Services had 118 calls from the Fort Richmond area between Jan. 1 and June 30, 2015.

Fifty-eight of the calls resulted in compliance orders, including two basement emergency vacate orders, 12 littering and garbage orders, and 32 vegetation orders. Nearly all have been complied with, while nine are still in progress.

Presenters at the meeting included city staff, developers, the University of Manitoba Students’ Union, and representatives from the university itself – executive director of public affairs John Danakas and director of government and community engagement Tyler MacAfee – who took heat from the crowd for what they believe to be insufficient on-campus housing.

Danakas presented the university’s plan to develop the former Southwood golf course property, which the U of M took over in 2011.

The plan aims to accommodate up to 4,200 multi-dwelling units, along with 21,070 square metres of retail and hospitality space.

While Danakas conceded that the Southwood project is in the early stages and still years away from construction, he said the university takes its role as a neighbour seriously, noting the U of M replaced more than 350 beds in the aging Tache Hall with the 360-room Pembina Hall residence in 2011.

He acknowledged the construction offered little in the way of new beds but said it speaks to the university’s commitment to accommodating students.

“There isn’t necessarily a scientific study of just which residences in the area are illegal rooming houses or who exactly is living there,” Danakas said.

Nearly 60 community members have committed to participate in the residents’ association, which is scheduled to hold its first meeting on Nov. 4.

But that’s little comfort for Patrick, who said he worries the association will simply insulate the city and the university from the community’s concerns while the number of rooming houses continues to rise.  “There’s an influx and there’s growth and if there’s continued growth, what happens to this community?” he said.  “It evaporates. There will be nothing.”

The Manitoban: The Official University of Manitoba Students’ Newspaper
By Garett Williams, October 7, 2015