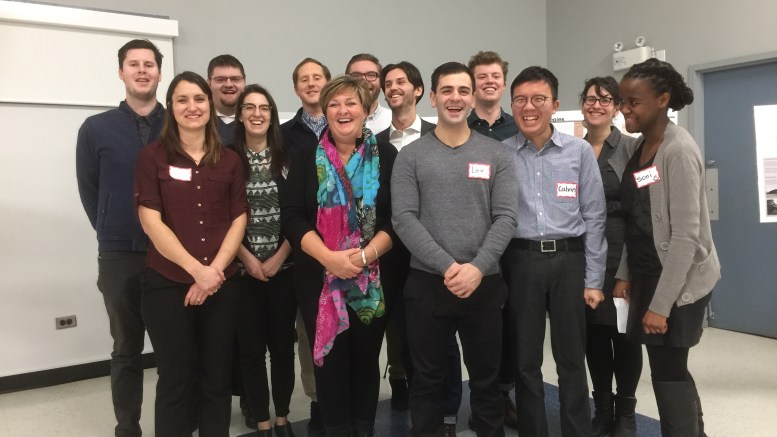 At a packed house on January 11, 2017, residents in the South Winnipeg-St. Norbert area received a presentation from Master’s Students on the challenges and proposed solutions to the rental housing issues in our community.   As soon as I receive the students’ formal report, and I will post it along with more details – please watch my website for updates!

My thanks to The Manitoban for reporting on this important priority in our community, and taking the time to interview me.  To listen to the radio interview, please click on the UMFM 101.5 FM link below,

The University of Manitoba is facing continued criticism from neighbouring communities for its lack of action in dealing with a number of allegedly illegal rental units housing students.

On Jan. 11, a dozen city planning master’s students from the U of M presented a report on land use, zoning, illegal housing, and rental challenges within the neighbourhoods surrounding the university’s Fort Garry campus, with a particular focus on the Fort Richmond and University Heights areas.

The Fort Richmond-University Heights Neighbourhood Association, which was formed in 2016 with support from Janice Lukes, city councillor for South Winnipeg-St. Norbert, is working to combat the illegal conversion of single-family homes to rooming houses largely used for rent to U of M students.

In addition to highlighting issues within the communities immediately surrounding campus, the presentation also focused on possible solutions – and their implementation – to issues further raised in the study.

“They had some really good short-term and long-term solutions,” Lukes said.

“The biggest roadblock there is university inaction, but they don’t feel it’s part of their problem.”

Since taking office in 2014, Lukes has been pushing for solutions to the lack of legal housing available to students.

In 2016, Developer Rise Real Estate presented its proposed project to construct a 14-storey apartment complex at the corner of Bison Drive and the Pembina Highway. The development would bring more than new 200 new rental units to the area.

Further strategies to increase affordable housing highlighted by the presentation team include mandating at least 10 per cent affordable housing for residential units in the to-be-developed Southwood lands property adjacent to the university.

The U of M took over ownership of the property in 2011 with plans to develop more than 4 ,000 multi-dwelling units, along with retail and hospitality space.

Lukes has previously spoken out about university inaction on the issue, claiming the U of M has been uncooperative and is at least partly responsible for driving up demand for cheap rooming houses as it increases the number of international students on its rolls.

“I think morally and socially it’s appalling what’s happening to the students and the university should care about that,” she said. “This is students’ safety. It’s great to bring in all these students, it’s wonderful. The community has no problem with the students, it’s the landlords.”

“It’s easy to say ‘it’s not our responsibility’ as the university, being an educational institution, but what about for the students’ sake? It’s horrific.”

International student enrolment at the U of M has nearly doubled since 2010 to more than 5,000 in 2016, accounting for 16.9 per cent of total enrolment.

John Danakas, the U of M executive director of public affairs, said the university has met several times with Lukes and community members to discuss off-campus housing.

“We intend to continue that dialogue,” he said. “At the same time, we don’t see the value in assigning blame on a complicated matter, or in stereotyping groups of students. We do see the value in working with partners to address concerns and needs, and we are more than willing to continue to do so.”

Lukes’ suggested the university reach out for support and “make some applications to the federal government.”

“I do not see the university doing any movement to that at all,” she said. “What I do see them doing is building a beautiful, fancy building and smart park, and internally funding it and taking loans for that.”

“I guess, to me, their priorities are mixed up.”

Strategies proposed by the study include density benefit incentives for developments within the Southwood property, including: affordable housing initiatives, alternative parking solutions that make use of available space rather than constructing more, incentivizing the construction of secondary suites, and promoting the university’s Homestay program, which merges English lessons with immersion in an English-speaking home.

“We came into this with the understanding that because we don’t live there, we don’t know the issues as intimately and we don’t live with the same emotional connection to the neighbourhood,” master’s student Michael Wakely said following the presentation.

“We’re trying to get a sense from the community, based on their opinions, and that’s why this kind of meeting is really important.”

The presentation also touched on strategies to encourage more interaction and conversation between residents and students, including the creation of a “town and gown committee” comprised of members of the neighbourhood association, the University of Manitoba Graduate Students’ Association (UMGSA) and the University of Manitoba Students’ Union (UMSU).

The students recommend the UMGSA and UMSU circulate an online student housing survey to identify the number of students living off-campus in non-family housing situations and to collaborate with the neighbourhood association to determine how many illegal rooming houses operate in Fort Richmond.

“I think what needs to be done is both the student body and the neighbourhood have to be at that table when a local area plan is formulated and insist on affordable housing for students,” said Wakely.

Wakely noted other universities create arms-length development agencies for projects similar to the U of M Southwood initiative.

“Hopefully that agency will be savvy enough to the situation but you can’t rest on your laurels and have that be sorted by them,” he said. “You have to have action.”

Following the presentation, the floor was opened for questions with many of the nearly 80 residents in attendance sharing their concern with the number of students they claim are occupying single rooming houses throughout the neighbourhood and the resulting noise complaints and by-law violations.

“I think it’s maybe a sense of losing a little bit of control of the direction that your neighbourhood – the one you’ve lived in for decades – is taking,” Wakely said.

Wakely emphasized that the responsibility to address the issues is shared and requires an equal effort from university administration, the student body, and homeowners to obey city by-laws and safety regulations.

“Residents, unfortunately, are kind of stuck in the middle and they react the way that I think any normal human being would react,” he said. “We’re doing this with the hopes of starting some kind of conversation anew.”