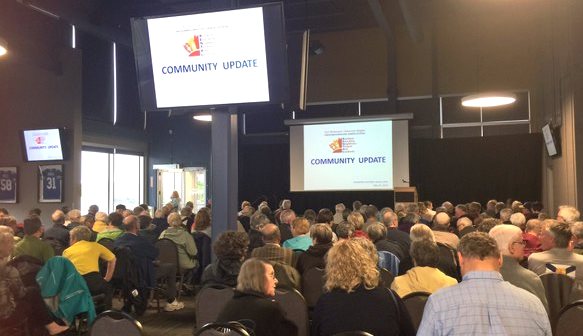 On May 31st, 2016, I hosted another community update on the rental housing issue in the South Winnipeg-St. Norbert ward.  Much progress on this issue has occurred over the winter months, as detailed in the article below.

If you weren’t able to attend, visit  Update – May 31 Community Meeting for more details and to view the presentations which were provided.

My thanks to The Manitoban for reporting on this important issue.

The Manitoban – The Official University of Manitoba Students’ Newspaper
By Tom Ingramon June 7, 2016

A residents’ association formed to deal with the proliferation of illegal student rooming houses in the neighbourhoods around the University of Manitoba is beginning to see results, according to an update delivered at a community meeting May 31.

The Fort Richmond-University Heights Neighbourhood Association, which was formed in partnership with Janice Lukes, city councillor for South Winnipeg-St. Norbert, is working to combat the illegal conversion of single-family homes to rooming houses largely used for rent to U of M students.

“We just pray that no disaster happens in these houses,” said Lukes. “Because ultimately, you can’t have nine people living in one of these houses and have something not go wrong.”

Residents claim that in many cases, these houses are rented to international students who do not know their rights as tenants. The association will be distributing postcards with a link to their website, which has information about the rights and responsibilities of residents, tenants, and landlords.

“This will be ongoing in perpetuity because the university won’t be going away,” said Lukes. “This is the very beginning of a long journey of educating, knowing responsibilities, and knowing rights.”

The website also has flyers residents who aren’t comfortable talking to their neighbours can print up and put in the mailboxes of offending houses.

These social pressures are a way to get results over and above calling bylaw enforcement officers, a slow process that Lukes described as “frustrating as heck for many of us.”

In addition, Lukes will be providing a list of alleged rental properties, gathered by members of the neighbourhood association, to city tax authorities. Cross-checking the list with tax filings will enable authorities to identify landlords who are double-claiming their provincial education tax credit.

A forthcoming bylaw change will also enable the Winnipeg Parking Authority to issue tickets on private property, which will aim to address illegal parking arrangements.

Although no solid numbers exist, U of M students, and in particular U of M international students, are widely believed to be the main source of demand for illegal rooming houses in the area.

According to Dara Hallock, vice-president advocacy for the University of Manitoba Students’ Union (UMSU), the undergraduate union is “still developing our position on the issue as it is a complex one with many factors contributing to the housing situation in the neighbourhood.”

The UMSU executive has met with Lukes, who also presented to UMSU council. UMSU has also advised the U of M’s International Centre for Students on developing workshops on tenancy for international students in the fall. These workshops will educate students on their rights and responsibilities as renters.

However, the actual voices of rooming house residents have not been prominent in the discussion.

Tyler MacAfee, the university’s director of government and community engagement, said housing is not a major concern for international students, judging by the topics raised in meetings with student counsellors.

One international student, who spoke with the Manitoban on the condition of anonymity, lived in a rooming house in the Fort Richmond neighbourhood from 2014 to 2015 and said his experience was positive overall.

“I probably wouldn’t have passed my classes if I did not stay in that house,” he said in an interview.

According to the student, cost was the major factor that brought him to a rooming house with six other tenants, where he lived with two others in the basement.

“Residence was much more expensive. Also, for apartments, if you’re looking at staying in them you need to have a co-signer,” he said.

“If you don’t have a co-signer you need good credit, and if you don’t have good credit already – as a student that’s not always possible, right? So it’s just a little more complicated. Those [rooming] houses, they assess you based on a personal meeting.”

The student said his house was fairly well-maintained, his landlord was responsive, and he never received a visit from bylaw enforcement officers or had any conflict with neighbours. However, he did say that many rooming houses are worse than the one he lived in.

Houses that lack proper water, that are dirty, and that have many people crammed into a small space should be shut down, he said.

“But there are some good ones too that help students out a lot.”

The neighbourhood association has had an uneasy relationship with the U of M, which doubled its international student enrolment between 2010 and 2015 without a corresponding increase in residence beds. Lukes has said the scarcity and cost of on-campus residence is one of the factors driving demand for rooming houses.

Listings for rental houses in Fort Richmond on Kijiji, a classified ad site, run between $2,000 and $2,500 a month. At a conservative estimate of five people living in the house, tenants would be looking at a rent bill of $500 or less plus utilities. The student interviewed by the Manitoban paid $450 a month in rent.

By comparison, on-campus housing is more expensive. Unlike rent on a house or apartment, U of M residence fees are due in lump sums at the beginning of each semester. Divided over the eight-month academic year, the 2016-17 rates for U of M dorms run between $430 and $937 a month, depending on the residence. Residence students do not pay separate utilities.

Most residences also have mandatory meal plans. One semester of a meal plan typically costs about the same as one semester’s rent, ranging between $2,403 and $2,665 per term. A super saver rate is available to residents of University College for $1,305 per semester.

The university announced at the May 31 neighbourhood meeting that its residence development plan, which is currently in the works, will explore the possibility of high-density affordable student housing on campus in order to relieve some of the pressure.

“What we’re talking to students about now, and the direction we’re looking at, is more affordable housing,” MacAfee said in his presentation. “So smaller rooms, no bathrooms, a mix of single spaces and double occupancy in the rooms, and that’s in response to what we’re hearing from students right now.”

MacAfee said in an email that the plan is still in development and there is no timeline as yet.

Lukes said she was encouraged by the announcement, but remains skeptical that a full solution can come from the university.

“We know that the university cannot make money on affordable student housing. It’s not a revenue generator,” she said.