Progress Made on Illegal Rooming Houses 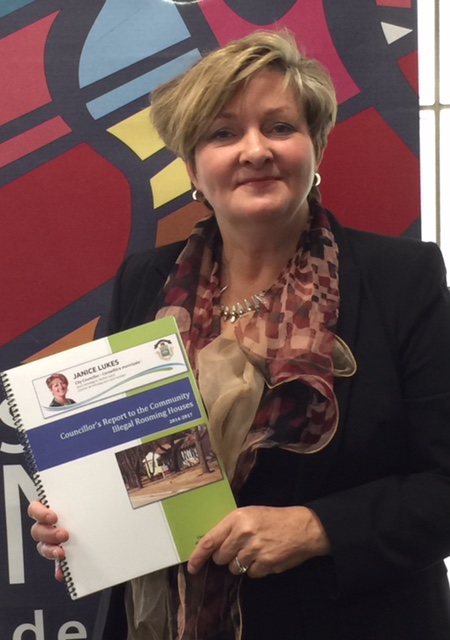 My Councillor’s Report to the Community on Illegal Rooming Houses provides an overview of the work initiated by the Fort Richmond-University Heights Neighbourhood Association, myself and many others in order to combat the proliferation of illegal rooming houses in the South Winnipeg-St. Norbert ward.

I am thankful that so many individuals and organizations are taking a lead role in working to improve by-law education, enforcement, neighbourhood liveability and safety in communities adjacent to the University of Manitoba.

Progress made on illegal rooming houses

A problem as complex as illegal rooming houses around the University of Manitoba is not one to be quickly solved, but progress is being made, Coun. Janice Lukes said.

On Aug. 31, 2017, the councillor for South Winnipeg – St. Norbert released her Councillor’s Report to the Community — Illegal Rooming Houses, an overview of the work initiated by Lukes, the Fort Richmond-University Heights Neighbourhood Association and other groups concerned about the proliferation of illegal rooming houses near the University of Manitoba.

According to the report, there are more than 150 illegal rooming houses near the University of Manitoba, a problem that has developed due to what Lukes calls a perfect storm of factors. The University of Manitoba has the lowest campus bed-to-student population ratio of 15 Canadian research universities, with no new beds planned for at least three years. The university attracts a significant number of international students, many of whom have limited credit histories that make it hard to rent an apartment. Some longtime Fort Richmond residents have downsized and left the area as they have gotten older. Put it all together and voila, you have a rooming house problem.

Lukes said significant progress has been made, much of it related to bylaw enforcement. The Winnipeg Parking Authority now has the ability to police the number of cars parked either on lawns or in backyards. That has helped reduce that specific problem.

Residents are also being educated on how to properly report an infraction. They can visit Lukes’ website which shows them the proper steps to follow when reporting excess parked cars, poorly kept yards and other safety hazards. That has helped council and administration get a more accurate idea of how big the problem actually is.

“In the past, people either were not reporting or they were not properly reporting,” Lukes explained.

An additional issue with bylaw enforcement is the City of Winnipeg takes a compliance approach to dealing with bylaw infractions, Lukes said. That means municipal staff do not immediately issue tickets but instead work with landowners to solve the issue, recognizing potential mitigating factors as health, personal economics, travel schedules, and overall familiarity with local regulations if the owner is from another country.

On her website, Lukes uses the example of someone filing a report about a yard with long grass and weeds. The call goes to 311, with an investigation taking up to 20 business days during summer. Add two business days to identify and process the infraction and an average of seven more to issue a compliance order with remediation timelines. It may take another five days after the compliance date for the property to be reinspected and seven more if the case is unresolved and public works has to do they work (with the property owner getting billed).

That is 41 business days from the time of the initial complaint.

An increasingly involved community should receive much of the credit for the gains so far, and its continued participation is needed if the momentum is to continue, Lukes said. People noticing problem homes have printed off information flyers and left them in the mailboxes. Street captains monitor their areas for infractions and potential new rooming houses.

“So what we’ve done, the No. 1 thing is the residents are engaged,” Lukes said. “They have tools they can use to inform violators.”

Local residents making use of resources

Those tools have indeed helped, Jacquie Field said. The chair of the Fort Richmond University Heights Neighbourhood Association said a website they developed in tandem with Lukes has educated people about relevant bylaws and how to properly report infractions.

“This has been effective for many residents,” Field said. “More infractions are being reported and acted upon.

“Dangerous living situations are being reported to the City by neighbours who have taken greater responsibility for their community.”

Field added that educational sessions sponsored by the University of Manitoba have helped students better understand their rights and responsibilities as neighbours. Similar sessions organized by Lukes have had a similar effect on landlords.

“I have received very positive feedback from the community about the usefulness of this information and the newsletter updates that go out to the community,” Field added.

Development-based solutions a long way off

The Canada Revenue Agency (CRA) can also be helpful, Lukes explained. Many illegal rooming house residents pay cash, which some landlords do not report as income. If a specific property generates multiple complaints, Lukes’ office can send a letter, and the CRA can also be notified.

Lukes expressed sympathy for international students, who are often left with no solution but to rent an illegal rooming house suite.

“The challenge is apartment complexes, landlords, and rental agencies want rent up front or a credit history so many international students don’t rent in apartment blocks,” she said.

Many international students will have no recorded credit history in Canada so landlords will either not rent to them or they want as much as eight months’ rent up front, Lukes said. She added the Canadian Federation of Students has identified it as a key issue and wishes the University of Manitoba would do the same.

“They flat out say they are not in the housing business, they are in the education business,” Lukes said.

That is a moral failure by the university’s administration, she added.

Don’t look to the former site of the Southwood Golf and Country Club for new student residents anytime soon, Lukes said. The University of Manitoba took possession of the 120-acre property six years ago and is taking a methodical approach to its development.

New housing will have to come incrementally, with Lukes citing two small developments on University Crescent and one on Pembina Highway as examples. The sites of former single-family homes or small businesses can, if properly managed, be redeveloped into multi-suite properties.

A simpler way to increase the supply is to make it easier for students to get from the university to other areas of Winnipeg where they can rent an apartment, Lukes said. And that means changes to transit.

“It takes people in St. Vital two hours to get across the river,” Lukes said. “The transportation to get to the university is so crummy.”

Coming changes to Winnipeg’s rapid transit system will make it easier for students to rent in other parts of Winnipeg and quickly get to the Fort Garry campus, Lukes added.

City of Winnipeg spokesperson Michelle Bailey said the municipality is actively working to reduce the number of illegal rooming houses. The effort is a collaboration between 311,Winnipeg Fire Paramedic Service, Community Services, and Property, Planning and Development Departments.

“All engage in inspections as part of their day-to-day operations,” Bailey said, while adding staff from various departments may notice and report unlicensed properties while conducting their usual duties.

Bailey preferred not to speculate on the number of unlicensed facilities, saying that identification of such properties is difficult. People who believe they have identified a suspected illegal rooming house should contact 311.

“All addresses that are reported by the public as potentially being an un-licensed CRD or CRD-shared facility, are followed-up on and inspected,” Bailey added.

And those calls have indeed been coming in. Bailey said the City of Winnipeg initiated a new process of steering complaints after they are reported to 311 in November 2016. Between then and Aug. 31, 2017, 137 such calls were received.

While there are plenty of challenges remaining, Field said everyone should be encouraged by the success they have achieved so far.

“There is still a long way to go to ensure the safety of the students and that the livability of the community is protected, but in the last year and a half a lot has been accomplished.”