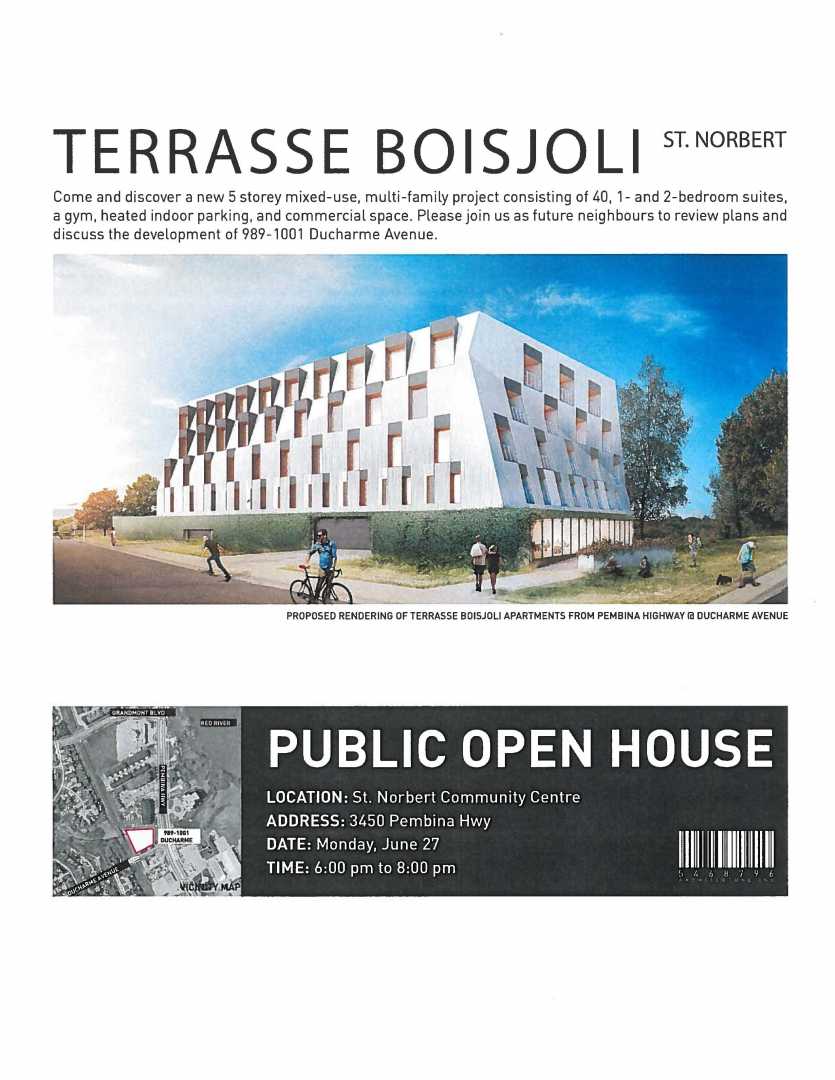 I was pleased to attend the recent open house on June 27, 2016 regarding this proposed residential project.  If you missed the information session, please refer to the article below for a good overview.  My thanks to the Winnipeg Free Press for covering this story.

The developers of a possible condo or apartment block in St. Norbert are hoping to bring different generations together into one modern, French-style building.

Construction of Terrasse Boisjoli is set for either fall 2016 or spring 2017 at the corner of Ducharme Avenue and Pembina Highway, said developer Alex Boersma. The five-storey development will consist of 40 one- and two-bedroom suites, a fitness centre, a heated parking garage and commercial space. It will also boast public green space.

This is the first project Boersma and his business partner, Ryan Ridge, are working on together after working independently and for different companies in Manitoba. Boersma said St. Norbert appealed to them as a beautiful community with a lot of history.

“One of our Realtors brought it to our attention, and we really like the creek; we like St. Norbert,” Boersma said. “It’s really hard to find land that makes sense at a price that makes sense, especially for people starting out, like us.”

While the properties were exactly what they wanted, the setbacks they came with weren’t. The architects, Jordy Craddock and Colin Neufeld of 5468796 Architecture, said the nearby railroad tracks and creek, named after the Boisjoli family who lived in St. Norbert for years, gave them a few challenges in designing the structure.

Craddock said it was one of the more complicated sites he’s had to work with. The creek serves as a major drainage-way for southwest Winnipeg, and they had to work with the city to make sure their design didn’t disturb its flow. New guidelines for construction near train tracks also posed a problem.

“The city recently adopted new guidelines for CN, and those guidelines required certain setbacks from buildings and were designed to ensure the safety in case of any derailment,” Craddock said. “Basically, CN requires a crash wall actually built into the building.”

Of the other options, more setback lines and berms, Craddock said the crash wall built into the parking-garage part of the building made the most sense.

“With that easement from the waterway, we had to sort of opt for that crash wall, which is a bit more of an urban gesture,” he said.

Terrasse Boisjoli is the latest in a series of recent multi-family housing projects by different developers, kick-started by Sherwood Developments’ completion of the Renaissance condos at 3420 Pembina Hwy., seven years ago. It was the first condo development since the late 1970s or early 1980s, said Norm Gousseau, CEO of Enterprises Riel, the economic development agency for bilingual districts in Winnipeg, including St. Boniface, St. Vital and St. Norbert.

St. Norbert has urban-building-design guidelines requiring developers to use some elements of Franco-Manitoban architecture.

Lukes was at an open house the architects held last month and said she thinks the residents who attended are excited for the new development, especially a possible coffee shop that could fill the commercial space on the main level.

Boersma is hoping Terrasse Boisjoli will attract a wide range of tenants, from university students to empty nesters.

“I’ve been reading a little bit about buildings where they have a mixture of millennials and generation X and everyone in between, and I like the sense of community a building like that can create,” Boersma said.

Lukes said with the recent condo and apartment boom in the south end of the city, a development such as Terrasse Boisjoli is a necessary addition to the community.

“There is a tremendous demand in south Winnipeg for units this size because of the university, because there’s a lot of out of town kids moving into the city,” she said.

Boersma wouldn’t disclose the price tag on building the development and said he wants to work with a property manager to figure out how much they should charge tenants.