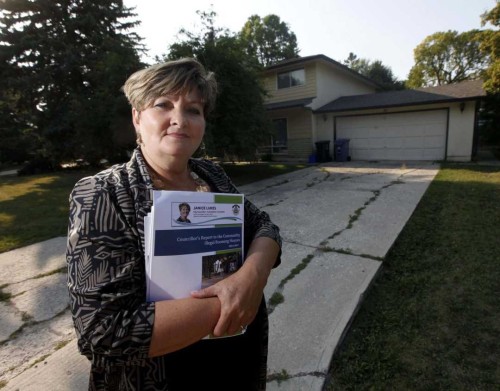 Since focusing on the illegal rooming house issue when I was elected as City Councillor in fall 2014, I’ve worked to peel back layer upon layer of involvement by many stakeholders in order to understand the crux of the issue and begin developing solutions.  For details, see Councillor’s Report to the Community on Illegal Rooming Houses.

Illegal Rental Housing in Other Neighbourhoods

Take Action and Report to 311

My thanks to the Winnipeg Free Press and CBC News for reporting on this important issue.

A report set to be released this morning by Coun. Janice Lukes suggests there may be more than 150 illegal rooming houses in Fort Richmond and University Heights, many targeting university students and packing anywhere from five to nine people into converted single-family homes.

In some cases, houses sold have seen their basements, living and dining rooms turned into as many bedrooms as possible to be rented out to single tenants.

“Here’s one we had the other day: it was a 1,000-square-foot house with five bedrooms. Five doors, five keys, the rooms were numbered. You do the math,” said Lukes, councillor for South Winnipeg-St. Norbert.

A shortage of affordable housing, increased student enrollment (particularly international students) and an aging demographic downsizing “created the perfect storm” for the current situation, reads the report, which took three years to research.

International students, many with no local job history or co-signers, are particularly susceptible to the shady renting practices.

“They rent these places not knowing a bylaw officer could come and kick them out at exam time. They don’t know it’s illegal. I can barely translate the bylaws because they’re so ridiculously written,” Lukes said.

What it comes down to, in her opinion, is supply and demand.

There’s a dire need for affordable off-campus student housing and no shortage of “slumlords” looking to turn a profit without concern for the safety of their tenants or the condition of their properties.

What’s at stake when it comes to the high concentration of illegal renting practices around the university is a lot more than houses in need of a paint job or yards not mowed in ages, according to Lukes.

It’s about doing something before people die.

In March, a fire broke out at a home on Pasadena Avenue where it is believed between five and nine university students were living. Incidents such as that help motivate Lukes and neighbourhood residents to do something about the issue before lives are lost.

“Yes, it’s sad the weeds are long and they’re not taking care of their yards. Those are legitimate concerns. But the big picture is: the last thing I want on my watch is a house fire and students dead in it. We’ve had some very close calls. This is life-and-death stuff,” she said.

“Residents are worked up about these slumlords, but they’re also concerned about 10 kids in a house who don’t know each other. When a fire breaks out and you don’t know anyone and you just run, that’s potential for disaster, potential for deadly occurrences.”

According to the report, one issue surrounding illegal rooming houses is the “perceived lack of bylaw enforcement and ability to enforce in a timely manner.”

When asked if the city is doing enough to combat the issue, Lukes said it was providing a “basic core level of service” with the resources at its disposal, but that many residents feel it’s not enough, which is why they chose to get involved with the issue.

When contacted for comment a spokeswoman said the city was actively working to reduce the number of illegal rooming houses and encourages concerned citizens to contact 311, adding that between Nov. 1, 2016 and March 24, 2017, they’d received 53 calls.

One of the reasons research for the report took years, according to Lukes, is because the city did not compile and analyze data on the issue, instead only investigating complaints when filed.

Over the past three years, Lukes said, residents and students have taken it upon themselves to compile and analyze that data.

A variety of approaches were taken, ranging from U of M master’s students doing a project on the issue, to citizens keeping an eye out for suspect properties, to what Lukes described as a “retired grandma with a bad hip, who goes on the web and searches” for advertisements of single-room rentals in her neighbourhood.

The reality is that as the problem did not spring up overnight, it isn’t likely to go away overnight either.

Nonetheless, Lukes is confident real progress has been — and will continue to be — made.

The University of Manitoba has the lowest percentage of on-campus student housing of all 15 research universities in the country. The university was unable to provide comment by time of publication.

The report makes clear that illegal rooming houses are prevalent throughout south Winnipeg, but that the high concentration of them surrounding the university is conducive to research into the issue.

Up to 150 illegal rooming houses near the U of M: report

A perfect storm of conditions has led to the proliferation of illegal rooming houses near the University of Manitoba, according to a report prepared by the area’s city councillor.

In her report, Illegal Rooming Houses, Coun. Janice Lukes (South Winnipeg-St. Norbert ward) focuses on the situation in Fort Richmond, University Heights and surrounding neighbourhoods. The report finds as many as 150 illegal rooming houses may exist near the university.

“A shortage of affordable housing for students combined with an increase in demand results in the prolific development of illegal rooming houses,” the report says.

The report crunches data from several sources, Lukes says, including real estate data, telephone calls to her constituency office, 311 and reports from area street captains with the local residents’ association.

“We basically compiled three years worth of work into this report and we’re highlighting not only what the issue was,” Lukes said, “but what we’ve been doing to combat the issues. What changes have been made in bylaws, what things have occurred that are enabling us to crack down on basically slum landlords.”

Lukes says after analyzing the data, 158 suspected illegal rooming houses were uncovered: “We don’t know if they are, yet, because we don’t go in and knock on the door doing surveillance.”

“I was at a house the other day,” the councillor said. “It was up for sale. I toured it: Complete suite, full-out rooms in the basement, and the windows were taped and barred. It was horrifying.”

The No. 1 concern about illegal rooming houses is the possibility of fire and ultimately, someone being killed, Lukes says.

“We’ve had an incident this past spring break, and there was a fire and three kids got out. Everyone was OK, but there was a kitchen at the bottom of the stairs. Well, that’s not good. It caught on fire.”

Lukes says despite the report, things have improved thanks to a combination of determined residents, public education campaigns, co-operation with the university and better bylaw enforcement.

“I think the good thing is that is coming out of all of this … You sit down and compile everything you’ve worked on for the three years, and you go: ‘Oh my goodness. I knew we were accomplishing great things, but wow. A lot of positive changes have been made.'”

Lukes credits the Fort Richmond-University Heights Residents’ Association for spearheading many of the changes.

“The No. 1 problem for poor [bylaw] enforcement is improper infraction reporting,” Lukes said.

“People weren’t properly reporting. They have to email or phone 311. The residents have built a website that walks people how to make a report, what the trigger words are.

“When 311 gets these calls, they triage them. Is it a zoning issue? Is it a property issue? Is it a fire issue? There’s a lot of different avenues that this call go in on. It’s important, and residents have learned this.”

‘The more we understand and try and enforce some of these bylaws, landlords just go deeper and darker. But we’re on it.’  – Janice Lukes

“The more we understand and try and enforce some of these bylaws, landlords just go deeper and darker. But we’re on it,” Lukes said. “We’re making progress, but I don’t have that data [yet] to show it.”

Now that the past three years of data have been compiled, the research will continue with more current and specific data to keep the pressure on, Lukes says.

As well, the councillor says, she’s working to build affordable housing in the area.

“I’ve been working with developers. There are more dorm-like apartments that are going to be going up on Pembina Highway. It’s going to help alleviate this problem. I’m rolling out the red carpet for them.”

Details from the report’s findings include: