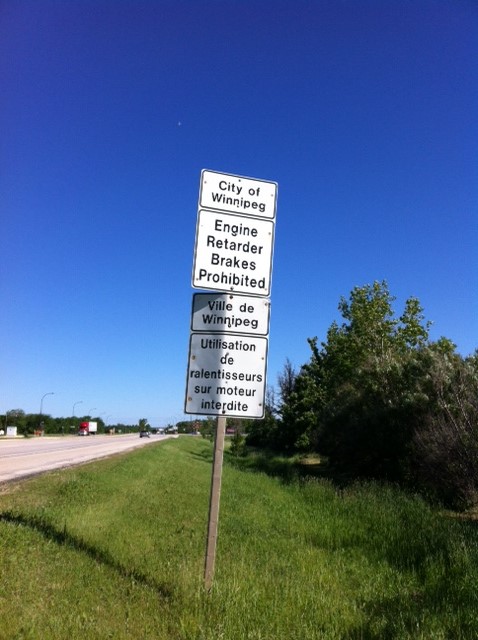 My offices receives many phone calls and E-malls from residents with concerns about traffic noise on the South Perimeter Highway.

This busy highway is a National Transportation Corridor which falls under the shared jurisdiction of the Province of Manitoba as well as the Federal Government.  It also connects with PTH 75, the main highway from Winnipeg to the Canada-US border, which serves as an international entry point.

To address this complexity of jurisdiction, I am working with the City’s traffic engineers, Manitoba Trucking Association, RCMP and the Province of Manitoba.  Below is a summary of the information I have obtained to date.

Signage prohibiting the use of engine brakes in urban areas is installed at various locations along the Perimeter Highway. These signs were installed years ago with permission from the Province (Manitoba Infrastructure) and are located along the South Perimeter at several locations:

I met with Mr. Terry Shaw, Executive Director of the Manitoba Trucking Association  and requested that notice be sent to the trucking industry to remind truckers to respect the airbrake signage around the City of Winnipeg. Mr. Shaw is relaying this request through the local and national trucking communication networks.  Trucking firms and independent truckers will receive this information and hopefully will respect this request.

Enforcement on the Perimeter Highway for this issue and other traffic issues falls under federal jurisdiction, and is the responsibility of the Headingly RCMP Detachment. I am working with the RCMP and am requesting increased enforcement. This can be challenging because the RCMP must catch the offending vehicle in the act.  The Province has a Commercial Vehicle Inspections Unit which also patrols the Perimeter Highway and I am working with them as well.

The Province recognizes there are traffic and noise challenges on the South Perimeter.  In August, 2017, they issued a request for proposals to study redesign of South Perimeter Highway. There will be public information sessions on this matter in the coming months and noise issues will be included on the agenda.

In summary, this is a challenging issue to enforce, but I believe if we increase our signage, continue to have regular outreach to the Manitoba Trucking Association and work with enforcement avenues, we can reduce the traffic noise.