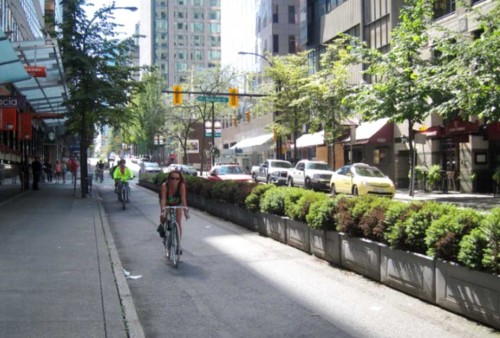 Today, yet again, I brought forward a Motion at the meeting of the Infrastructure Renewal and Public Works Committee requesting that Winnipeg’s Public Service study (just study) the concept of adjustable protected bike lanes, i.e. the cost, the trade offs, the timeframe it would take to implement downtown, etc.

I brought forward this Motion so that City Councillors would have the data they require to make an INFORMED decision on whether this concept would be feasible to implement.

AUDIO CLIP:  Please listen to the approx. 15 minute debate which occurred at today’s Public Works meeting on this issue:

Based on previous reports and discussions, the Winnipeg Public Service clearly supports ‘adjustable’ bike lanes for a multitude of reasons that make good sense to taxpayers:

I’m  shocked that the Chair of Public Works chose not to support a Motion to STUDY infrastructure that provides increased safety for cyclists, innovative best practices and better value for tax dollars.

Not wanting to at least study best practices and innovation based on other cities’ experiences is more than concerning.  It’s downright frightening.

I will continue advocating for adjustable protected bike lanes, but will not be bringing forward another Motion until the Public Works Committee has a change of committee members in late fall 2018, after the 2018 civic election.

My thanks to local media for their coverage of this story: