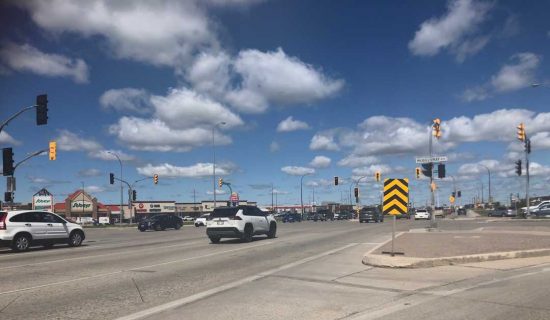 WINNIPEG drivers have likely all faced the challenge: you want to stay in your lane but you’re not sure where it is.

Snow-clearing, road sand and other Manitoba weather realities strip away paint that marks lanes, leaving just a few flecks of colour or blank pavement. It can take many weeks for city crews to repaint those lines each year.

Two councillors are pushing for changes to that process, which they hope will make streets safer.

Coun. Shawn Nason (Transcona) is calling on the city administration to provide options to “improve the permanency of lane markings,” in a motion set to be debated at the July 7 meeting of the public works committee.

Nason said the current faded markings are barely, or not at all, visible, which could make motorists and cyclists more likely to compete for the same space.

“This creates an unsafe situation, and we need to do a better job to ensure (that) there are properly marked trails on our roadways. Then the motoring public can (stay in) their proper lane,” he said.

He believes the longevity of the paint is key to addressing the issue. “We need some permanency on our line-painting, that’s not just put down and washed away a few weeks or months later — something that can stay on the road over the winters,” said Nason.

In 2013, a KPMG public works review offered recommendations for Winnipeg to improve its road markings, which the consultant found were often missing.

“Reliance on a single, in-house crew that takes up to 34 weeks to remark the city’s streets implies that many roads are left unmarked for much of this time,” the report notes.

KPMG suggested Winnipeg consider the use of longer-lasting paint, try out new technology, and possibly contract out work to address the problem.

Meanwhile, Coun. Janice Lukes (Waverley West) said she’d like to see the city prioritize lane painting so intersections that have the most collisions get painted first. Lukes said she lobbies for new paint at the intersection of Kenaston and Mc-Gillivray boulevards each year, then waits weeks or months to see the work completed. “It’s still not painted and it’s (late) June. Last year, it was the middle of August,” said Lukes. “Personally, I just think high-collision intersections should be (the top) priority at all times.”

A total of 1,352 crashes took place at Kenaston-McGillivray between 2015 and 2019, the most at any intersection, Manitoba Public Insurance figures show. Leila Avenue and McPhillips Street had the second-highest number of crashes (1,191). Lukes said high-crash locations tend to have crosswalks and may also offer bicycle lanes, so making their lane markers more visible would make all road users safer. She plans to soon raise her own motion for the city to paint its Top 10 highest-collision intersections before any other roads each year.

The city’s website notes it still uses one lane-liner machine that paints about 1,000 kilometres of roadway lines and edges, including 1,061 intersections. In a written statement, city spokeswoman Julie Horbal Dooley said the complete process takes about 35 weeks, which isn’t finished some years due to weather and resource issues. The work itself is growing, Horbal Dooley said. “The number of lane markings in the city is increasing at a rapid pace as we add active transportation routes to the network and… some regional streets are remarked up to three times a year.” The statement noted paint options that are more durable have a “cost-prohibitive nature.” Horbal Dooley also noted the public works department does prioritize some repainting for sites that need it most and intersections that have the most traffic.