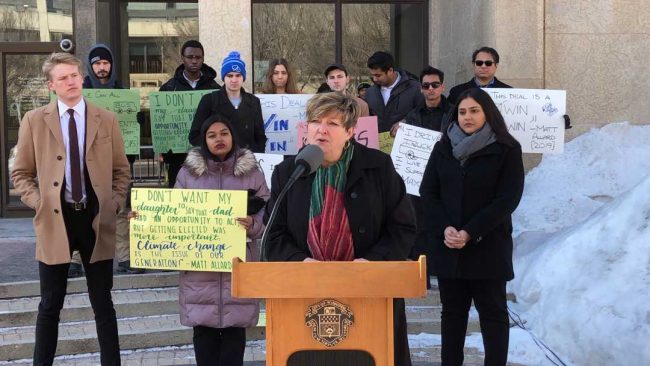 As a member of Council, who was not part of the months-long daily budget deliberations, I was not able to have any direct input into many decisions made in the proposed four-year budget (2020-2023)

It is only AFTER the draft budget is released that I and six other Councillors have an opportunity to review and speak specifically to certain cuts or additions. I’ve poured  through over the weekend and while the proposed budget presents many good initiatives, it proposes cutting the Universal Bus Pass (U-Pass), one of the City’s best programs in encouraging young people to take the bus vs using a private vehicle to get to University.

Prior to being elected, I was asked by the City to sit in an advisory capacity on Phase One of the rapid transit corridor. Prior to being elected, the Province of Manitoba asked me to chair the first ever active transportation advisory committee and make recommendations to the Province. I’ve been supportive of sustainable transportation now for almost two decades – and find this proposed cut incredibly short sighted.

How does this impact YOU if you are not a student?

IF the U-Pass is cancelled, South Winnipeg, downtown, and the entire City will be directly impacted.

In the South end we will have:

Please contact the Mayor directly to ask him to not cut the U-Pass – bbowman@winnipeg.ca The Mayor has direct influence over his budget working group – and is the leader of what we hope will be innovative, sustainable programs and policies for a growing city.

You can also contact members of the Budget Working Group who made this regressive decision:

Thank you Shawn Nason – Transcona City Councillor for your support on this important issue.

City of Winnipeg Councillors and Student Union leaders are calling on the Mayor and his Budget Working Group to reinstate the Universal Bus Pass Program (U-Pass) into the 2020-2023 City of Winnipeg Budget.

“The U-Pass is the City’s most successful program ever launched encouraging citizens to use public transit instead of driving vehicles.” said Councillor Janice Lukes.  “It’s incomprehensible that Council would want to cancel the U Pass program as it will result in thousands of vehicles back on the streets, slowing traffic, increasing congestion and greenhouse gas emissions.  As a modern City, growing towards a million citizens, City Council must be progressive and aggressive and invest in encouraging more people to use public transit.”

“To think a low-income bus pass, or a student discount pass is an equivalent substitution for the U-Pass couldn’t be further from reality.” said Jakob Sanderson, President, University of Manitoba Student Union. “The purchase of a U-Pass is mandatory for full-time students, and as a result, it is the ultimate form of encouragement for students to use transit throughout the year.”

Queen’s University has had a universal transit pass since 1973. Today, every major City in Canada offers a U-Pass program encouraging young people to use public transit.  Study after study shows young people today are making more use of transit, bikes, and foot power to get around than the generation before.

“Since its rollout in 2016, the U-Pass program has led to a 25% increase in ridership along routes to both the University of Manitoba and Winnipeg and has removed upwards of 7,000 vehicles off the road, city wide each Monday-Friday.” said Tanjit Nagra, Vice President Academic, University of Manitoba Graduate Students’ Association. “Just weeks from now, the City’s long awaited and rapid transit corridor is opening. This is the largest single capital investment this City has ever made in transit, and it would so short sighted to cancel the U-Pass program and to have students transitioning back to using private vehicles.”

“Downtown is growing and becoming denser. The denser the environment becomes, the more challenging it is to get around.” explained Jibril Hussein, President-elect, University of Winnipeg Student Association. “Many students are using the U-Pass to ride transit instead of driving through an increasingly dense downtown environment. This is a benefit to all as increased transit users results in safer, more easily accessible streets for all users.”

City of Winnipeg Councillors and Student Union leaders recognize there are budget challenges, but are hard pressed to understand how such an incredibly successful sustainable transportation program is proposed to be cancelled, especially in a budget that is proposing the highest investment ever made in road construction.