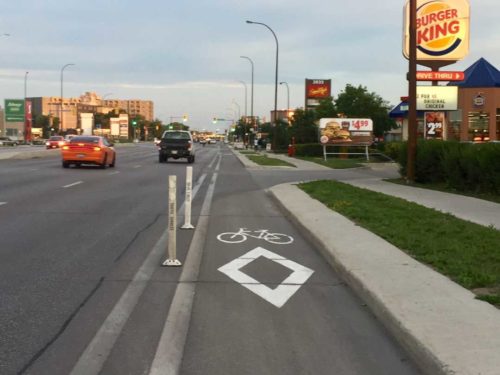 In and around 2009-2010, with much encouragement from Bike to the Future and the Winnipeg Trails Association, former Councillor Swandel (St Norbert) moved a motion at the Standing Policy Committee of Infrastructure Renewal and Public Works to have the public service study and proceed with installation of protected bike lanes between Crescent Drive and Pembina Highway. This was a remarkable move by the City of Winnipeg as it was the ‘first step’ towards a protected bike lane network.

It is important to note, the volume of traffic ranges upwards of 30-50,000 vehicles per day on Pembina Highway south of Bishop Grandin, travelling at 60km/hr. It is also important to note, the plastic post ‘protection devices’ are glued to the roadway but detach daily by vehicles driving over, or catching the posts when they turn. The public service maintenance department does not have sweeping machines that fit into the bike corridor, so a large street sweeping machine is used, requiring the plastic posts to be spread far apart to allow the sweeper to weave in and out of the unprotected sections of the bike lane. This maintenance technique results in very random sections of bike lane being cleaned.

I travel Pembina Hwy upwards of 2-4 times daily. Driving, in transit, and cycling – but I do not cycle in the bike lanes. I simply do not feel any level of ‘safe protection’ from the upwards of 50,000 vehicles a day and I am not alone. While the City has no firm record count of the number of cyclists using the Pembina protected bike lanes, I can very confidently state that they are not being optimized and used anywhere near their capacity or to the value of the $36 Million investment made. South of Bishop there is an almost non-existent use of the entire protected bike lane corridor by cyclists.

The City has invested upwards of a $36M into the Pembina bike lanes, but this investment requires additional engineering refinement to make the bike lanes function properly. A design refinement needs to occur and a higher level of ‘safety protection’ on Pembina Highway needs to be the result.

I’ve made a motion at the Riel Community Committee that will be presented to the Standing Policy on Infrastructure Renewal and Public Works (IRPW) in September asking for the public service to:

Cycling engineering and the proper cycling infrastructure is an emerging field. Refinements often occur based on data and feedback from users. It is also critically important to have a comprehensive monitoring program in place to ensure we have accurate data to analyze and work towards maximizing our cycling investments.

Come September, I will be speaking to this motion.