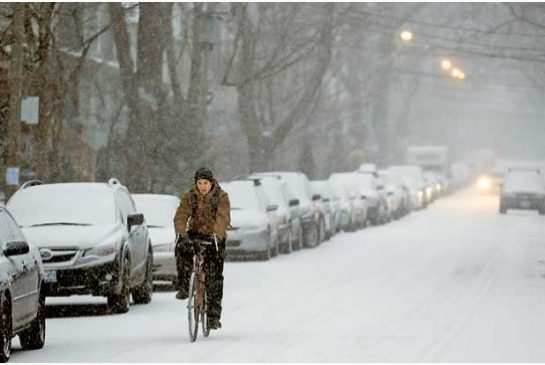 As crews near the end of a citywide plow operation following last week’s dump of snow, one Winnipeg councillor believes the time is right to examine how service can be improved for those on foot and two-wheels.

Janice Lukes is inviting locals to give feedback on her website about the city’s clearing of sidewalks and bike routes, which make up the city’s active transportation network.

“Changing a policy is not easy, but if it’s for the betterment of mobility in our city then that’s what we must do,” she said Monday.

“We can’t hibernate in the winter. We need to be active. The money it saves us on healthcare alone is significant.”

Lukes says although the city’s policies around active transportation have evolved, there’s been a dramatic increase in peoples’ desire to walk and bike year-round.

That’s why she questions how conducive current snow removal standards are to active transportation during winter.

For example, she points to the fact clearing of sidewalks and bike routes are tied to the priority level of adjacent streets.

Is that correct? In some cases, absolutely. In others, not so,” she said.

Mark Cohoe, chair of advocacy group Bike Winnipeg, calls the policy car-centric and says it results in a “hit or miss” clearing of bike paths and unpredictability for cyclists.

“Those (priority) routes aren’t necessarily the routes that people are taking by bike,” he said Monday.

Having a periodic review of the city’s snow clearing policies as they relate to accessibility is critical, says Allen Mankewich, spokesperson for the Manitoba League of Persons with Disabilities.

“In order to enjoy all aspects of the community as everyone else does, we need to be able to get around,” he said.

“A lot of people tend to not go out as much in the winter if they do have mobility issues.”

Lukes said the feedback collected would be discussed during a series of upcoming sessions, brought to experts, and the city’s active transportation advisory committee.

“Do we up the budget? Do we reallocate what’s in the budget we have?”