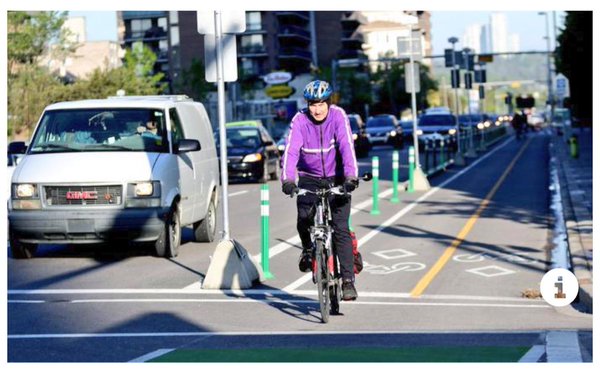 The City of Winnipeg has launched a pilot project for downtown adjustable bike lanes. It’s good to know that the wheels have finally been set in motion on this initiative.  For background information on this issue, please visit these links on my website:

My thanks to Winnipeg Free Press and Metro News for reporting on this story.

City flip-flops on use of concrete curbs for bike lanes

City hall appears to be reconsidering its opposition to the use of low-profile concrete curbs in laying out protected bike lanes in Winnipeg.

The city announced a nine-month pilot project Tuesday that would result in the placement of the concrete curbs on a short block in the Exchange District and on a 100-metre stretch of Sherbrook Street, south of Cumberland Avenue.

The move is surprising because Coun. Janice Lukes has been proposing a similar approach for months, but each time, it was rejected by the administration and the public works committee on the grounds it was contrary to the city’s “award-winning” cycling strategy using time-consuming and more expensive poured concrete.

“It just goes to show the dysfunction we operate under at city hall,” said Lukes (South Winnipeg-St. Norbert). “Of course, I’m happy, but what a lot of needless nonsense, time and effort was spent when they were going to do it all along.”

Stephanie Whitehouse, city hall’s active transportation (AT) co-ordinator, said the nine-month pilot is a “materials test” to determine the suitability of the low-profile, portable concrete curbs, but added she was excited for the move.

Whitehouse said the city’s award-winning AT strategy places the highest priority on building protected bike lanes leading into and throughout the downtown network, but it doesn’t stipulate which materials to be used.

She said the experience of other municipalities has shown the concrete curbs to be an easy, efficient and less expensive way to build a bike network and the pilot will determine if they are a preferred material to the city’s traditional method of using poured concrete

“I’m excited about this one. I think it’s a win,” Whitehouse said. “They’re great, they’re adjustable and movable.”

Whitehouse said it took crews only three hours to lay down the 100 metres of concrete curbs on Sherbrook Street, adding she believes crews can beat that time on a similar stretch Wednesday along Bannatyne Avenue, between King and Albert streets.

Whitehouse said the pilot program will determine if the concrete curbs are compatible with winter snow-clearing and ensure they are durable.

“We don’t want to find efficiencies in installation and then discover we’ve created a whole host of deficiencies in our ability to deliver a street and cycling maintenance programs,” she said.

The City of Winnipeg has been slow and resistant to adopt adjustable materials to construct protected bike lanes. While Winnipeg’s current approved plan is to build 10 kilometres of protected bike lanes downtown over a three-year period, Calgary built a 6.6-km network in four months in 2015, and Edmonton built a seven-km network in a three-month span earlier this year. Both cities used the low-profile concrete curbs, along with paint and flexible bollards.

Other municipalities, including Vancouver and Ottawa, have also incorporated the concrete curbs, along with other portable/adjustable materials, including planters, in constructing protected bike lanes.

Whitehouse said regardless of the outcome of the pilot program, the city is committed to constructing the Garry Street portion of the downtown network using poured concrete methods, as part of a major reconstruction of the roadway.

“We recognize this as an important material and a potential mechanism for delivering protected facilities,” she said. “They’re a great way to get (bike lanes) in and a more efficient way and generally more cost-effective.”

Whitehouse said staff decided to do the $15,000 pilot as part of a $100,000 initiative for the enhancement of delineated bike lanes. The overall funding had been approved by council, part of its $4.7 million for active transportation for 2017.

Whitehouse said the city will be looking for feedback from motorists and cyclists for the pilot areas. While the concrete curbs are fixed into the roadway, they are portable and can be moved and the routes adjusted in response to public concerns. (Details on the pilot program can be found on the city’s website: wfp.to/walkbike.)

Lukes said she believes the city’s reluctance to use adjustable materials was a political decision, adding staff in the public works department had been advocating this approach all along.

The councillor said she was disappointed the city is only taking a half-measure and using the adjustable materials for a pilot, but believes it will be embraced as experience in other cities have shown it is less expensive and easier to construct and compatible with a prairie winter.

“Once people get a taste of it, they’ll want more,” Lukes said. “I’m glad we made the big effort and put the spotlight on the need for it.”

Winnipeg rolling out adjustable bike lanes in new pilot program – The concept may have been shot down by a council committee, but city staff are moving forward with an adjustable lane plan

The City of Winnipeg is beginning to roll-out progressive, low-cost adjustable bike lanes, despite a relative lack of political will.

A new pilot project announced Tuesday aims to install the flexible cycling infrastructure starting this week for a nine-month period of evaluation.

Stephanie Whitehouse, the city’s active transportation coordinator, said the trial could be a “mechanism” for installing more protected lanes.

Despite her foresight, and the pilot, it’s hard to say when that opportunity might come. In some ways, the department’s efforts contrast with how the infrastructure and public works (IRPW) committee repeatedly voted down motions to investigate the feasibility of a fast-tracked downtown bike grid.

But Whitehouse explained the initiative didn’t need explicit council direction, since it’s a technical trial to develop a standard for “pre-cast curbs.”

Coun. Janice Lukes, who tried to garner support for a study into this exact installation method at IRPW three times since October 2016, said she expects the pilot to “be a game-changer” for cyclists in the city.

“It’s really good, I knew all along the department wanted to do it… they know the best practice,” she said. “I’m just disappointed we had to go through all that brouhaha first.”

The city began installing adjustable bike lane curbs Tuesday, and will be doing so on Sherbrook Street south of Cumberland Avenue, as well as a section of Bannatyne Avenue next to Old Market Square.

The curbs will provide a physical barrier between vehicles and cycle lanes, but, as they’re fixed to the roadway with steel pins, will also be removable so they can be adjusted.

The method differs from the city’s usual approach for adding protected bike lanes, which is tied to road renewal and normally involves a permanent curb.

Whitehouse said piloting the adjustable materials now will help the city develop standards for installation and maintenance, and offer users a chance to provide feedback.

“We have a robust winter maintenance program and spring cleanup, and we have extreme weather, so we want to make sure these are going to be durable before we go out and put them all over the place,” she explained.

But, as the total cost of the trial is $15,000, she knows the concept has “a lot of potential” to be transformative in a hurry.

“It’s a small test but it has great potential because it may enable us to deploy protected facilities in a much more efficient way,” she said. “That’s really important to some, especially based on what we’re hearing from the public.

“There’s a momentum of demand, lots of people want to see this… we want to make sure we have our research done, that we have our ducks in a row.”