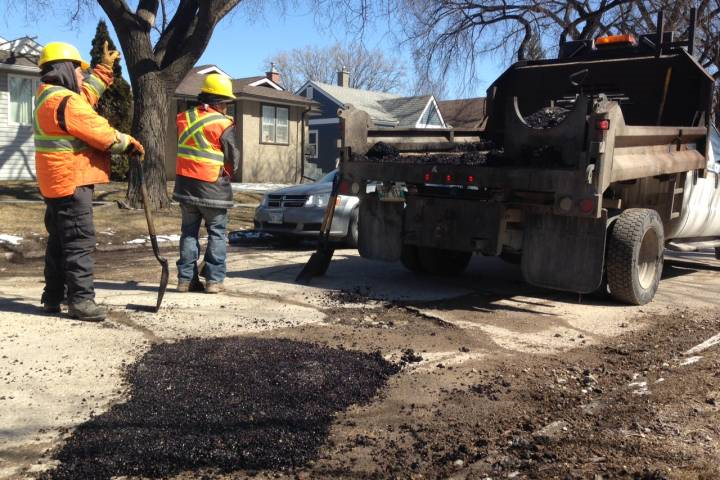 With signs of spring just around the corner, Winnipeggers are also encountering more potholes on our roadways due to an early freeze-thaw cycle this year.   In response, the City of Winnipeg has approved $1.8 million in 2016 for pothole repairs (see Global News article below).

If you see a pothole, it’s very important that you report it!  You can help keep our roads safe and free of potholes by reporting potholes:

Six primary factors contribute to the formation of potholes:

Freeze thaw cycles during the spring season cause most potholes. During warmer weather, the snow melts, causing water to seep into the cracks in the pavement and/or sub base. When the temperature drops, the water freezes and causes the sub base to expand. This puts pressure on the pavement in a small area, resulting in pavement failure or a pothole.

Similarly, water in the cracks or in between the concrete and asphalt overlays can freeze, causing pieces of pavement to pop out. Heavy traffic puts an added burden on weak pavement.

How are Potholes Repaired?

The City strives to repair potholes in a safe and cost effective manner, keeping in mind safety, budget, personnel, and environmental concerns. Depending on the situation, a pothole repair may involve a temporary, semi-permanent or permanent solution. There are three primary types of repairs:

Reporting a Vehicle Damaged by a Pothole

If your vehicle was damaged when you hit a pothole, we recommend contacting Manitoba Public Insurance. A clear advantage to contacting them is that the MPI Adjuster will handle many of the details associated with resolving this situation.

You also have the option of contacting the City Claims Department directly; however you will be responsible for handling many of the details that the MPI Adjuster would have handled for you.  When contacting City Claims directly, you will be expected to:

Winnipeg pothole crews have used significantly more patching material so far this year than they had at the same point last year.

Crews have used 422 tons of the filling material as of Monday compared to 350 tons last year.

“The frost was coming out of our roadway at a two week early stage so we were seeing an influx of pothole failures,” said Jim Berezowsky, Winnipeg’s manager of streets maintenance.

That early onset of warm weather meant crews were out in full force earlier than usual to fill an estimated 12,000 potholes.

If the freeze-thaw cycle continues like the forecast suggests, the city is expecting another influx of potholes.

“When you see those overnight lows rise above zero again you’re going to see a period of time where those come back,” said Berezowsky.

The city budget has $1.8 million set aside for pothole repair.

However, it’s still too early to predict if the early warm weather and freeze-thaw cycles will force the city to over spend, said public works committee chair person Janice Lukes.

“If ever we do go over that budget amount we will definitely find it within the budget to address the safety concerns,” said Lukes.