Slow Down – Speed in Waverley West 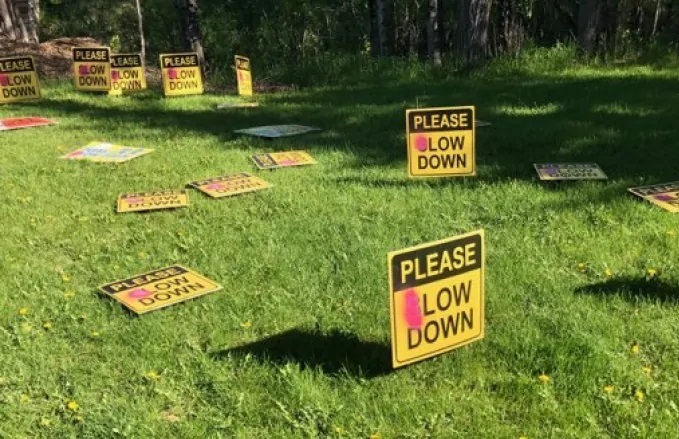 Thank you CBC for this excellent article:

Readers – please ensure you watch the video of speeders drifting in the parking lot at Save On Foods.

Someone tried to hit the brakes on Janice Lukes’ campaign to get people to drive safely in her ward.

Nearly a hundred “Please Slow Down” signs the Waverley West councillor drove into lawns over the last two weeks have disappeared, but Lukes knows where half ended up — on her front lawn.

“On Saturday morning I got up and I went out to have coffee and … on my lawn — and it wasn’t my birthday — I saw a bunch of signs,” Lukes told CBC News.

Lukes has been trying to get a group of drivers to gear down from street racing and speeding in the Bridgwater Forest area and down Kenaston Boulevard.

Forty-eight of the 100 signs Lukes had deployed to the neighbourhood not only ended up on her yard, but vandalized as well.

“They knocked off the ‘S’s with a big big spray paint blob on both sides and left the rest. They didn’t trash the whole thing,” Lukes said.

The result was an attempt to alter the signs from “Please Slow Down” to “Please Low Down” — which Lukes says is a reference to low-ride vehicles designed with ground-hugging clearance that provides better speed and handling.

Lukes may have the last laugh on the sign theft. Residents with surveillance cameras caught images of the signs being stolen.

“I don’t think they are the sharpest knives in the drawer because everyone here has cameras. So residents sent me pictures of the vehicle — on camera, video tape — of them stealing the signs,” Lukes said.

Lukes went to the Save-On-Foods parking lot in mid-May after hearing residents complain of a car meet on Saturday nights that drew dozens of vehicles, some revving engines, smoking tires and eventually racing down Kenaston Boulevard.

Some drivers were drifting — a technique of intentionally over-steering a vehicle that creates a controlled loss of traction.

“I thought that was pulling wheelies but it’s called drifting,” Lukes said.

A page on Instagram called Ruthless204 advertises the car meets and displays video of cars screeching through the parking lot and apparently speeding down dark streets.

Lukes said she and a resident followed a convoy of perhaps 40 vehicles out of the Save-On-Foods parking lot and on to Kenaston Boulevard, where drivers were disobeying traffic signals and going way over the speed limit.

The councillor saw a crash in the area, but wasn’t sure if the racers had anything to do with it.

“The collision really upset me. In our family we’ve had some tragedy and we know what it’s like to lose someone in an instant,” Lukes said.

‘Noise and plumes of smoke’

“I don’t live that close to Kenaston and I can hear them in my house without the windows open —  you know, the noise and plumes of smoke,” said Bridgwater resident Andrea Chow.

“It’s only a matter of time till somebody gets hurt. They all think they’re invincible,” said Chow, who monitors the social media page for the Bridgwater Trails Neighbourhood Association.

Lukes is in regular communication with the Winnipeg Police Service and says she understands the cops have plenty to do with speeders across the city.

A spokesperson for the WPS says they have fielded several complaints about racing and the car meet in the grocery store parking lot, but are challenged with similar behaviour elsewhere in Winnipeg.

“Unfortunately, we see similar complaints around the city and do our best to attend and address them. We have spent some time in the Bridgwater area, and will continue to do so,” said a statement from the commander of the WPS traffic unit.

Lukes has arranged for some more permanent deterrents to speeding. A dozen of so speed bumps, or tables, are being installed this summer.

“So if you’re driving a low-rider or something, you know that if you fly over where these speed tables it’s not gonna be good on your vehicle,” Lukes said.