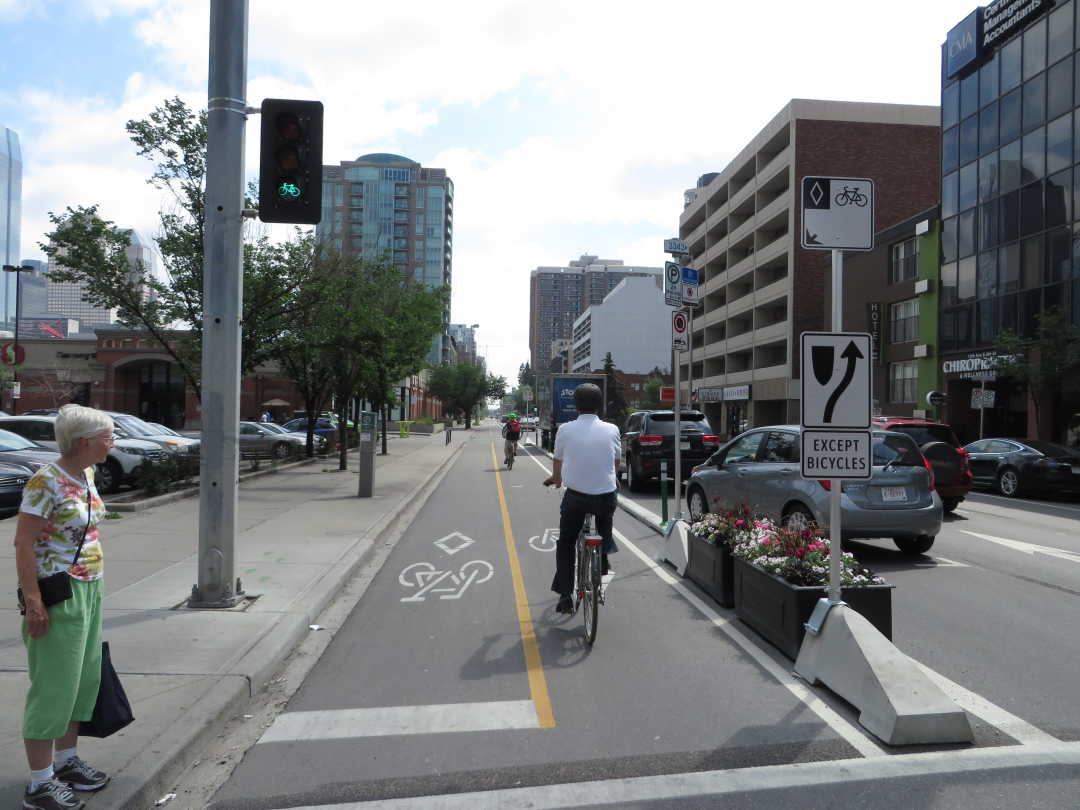 The current practice for Winnipeg and some other Canadian cities is to install bike lane infrastructure in conjunction with road renewal projects. Under this model, it would take at least 10+ years to develop a network of safe bike lanes in downtown Winnipeg.

Currently in Winnipeg, we have two pieces of separate bike lane infrastructure – along Sherbrook Street and Assiniboine Avenue. Interestingly, Assiniboine Avenue has seen an enormous increase of 227% in cycling since construction of that bike lane.

In comparison, the cities of Calgary, Vancouver and Edmonton have all prioritized safe cycling in their downtowns and are implementing adjustable bike lane infrastructure.  Earlier this week, I brought forward a motion asking Winnipeg’s Public Works Department to STUDY if this would be possible for Winnipeg, and what would be required IF City Council chose to support the installation of a downtown bike grid.

For those who have reviewed this framework, you will know that downtown is a priority.

Councillor Lukes’ Motion (“Received as Information” by the Committee)

For 14 years, I’ve been working to improve walking and cycling in Winnipeg, and will continue to raise the need for safe infrastructure in downtown Winnipeg and throughout our City.

Thank you to local media for reporting on this issue.

Some days, Winnipeg Coun. Janice Lukes feels like she is pedalling a bike going nowhere.

Lukes was puzzled this week by a committee’s decision to reject her proposal for an innovative “adjustable” downtown protected bike network in favour of a study to determine how such a method fits in with the pedestrian and cycling strategy the city adopted a little over a year ago.

Lukes (South Winnipeg-St. Norbert) said the concept of temporary structures for the downtown network had already been identified in the 2015 strategy.

“Clearly the committee has not read the (2015 Winnipeg Pedestrian and Cycling strategies) or listened to my presentation where I quoted word for word from the strategy and included page numbers on where to find the references on how to use cost effective methods,” Lukes said.

Lukes had petitioned the public works committee at its meeting Tuesday to authorize a report on how the use of temporary structures could be used to lay out a downtown cycling network by the end of 2018, how it would be financed and how the public would be consulted.

Winnipeg’s current policy is to construct protected bike lanes in tandem with street and underground infrastructure street renewals. Council approved a cycling and pedestrian strategy in 2015 that outlines proposed bike and pedestrian paths across the city, including the downtown, but it’s a 30-year plan.

The city has a protected bike route along a stretch of Sherbrook Street and is constructing routes along Assiniboine Avenue and Pembina Highway. The most ambitious plan appears to be the makeover of downtown’s Garry Street, with a 1.5-long-kilometre protected bike route that runs north from Assiniboine Avenue into the Exchange District. But it won’t be completed until the end of 2018.

Lukes said she thinks the timeline can be shortened considerably for the entire downtown with the use of temporary structures, such as bollards, concrete Jersey barriers, parking curb blocks, to determine the effectiveness and popularity of the routes before they’re made permanent.

Vancouver and Calgary have adopted a similar strategy while Edmonton and Ottawa have launched pilot projects using the temporary measures.

The committee also approved a plan to spend $4.7 million on new pedestrian and cycling paths and sidewalks in 2017, as that year’s action plan on the pedestrian and cycling strategy, with another $10.8 million on similar projects over the following two years. Officials with the department of public works told the committee that in addition to the $4.7 million, the department planned to construct an additional $8.83 million worth of active transportation components as part of other road renewal projects for 2017.

An ambitious plan to study a fast-tracked, adjustable grid of protected bike lanes is not moving forward—at least not yet.

After a well-attended info session in Winnipeg – including industry experts with experience implementing bike grids in other cities – Coun. Janice Lukes tried to get the infrastructure renewal and public works (IRPW) Committee to order a report on what it would take to follow suit locally.

Instead, IRPW chairperson Coun. Marty Morantz accepted her report—and the enthusiastic support from active transportation advocates, the business community, and other councillors alike—for information, and asked administration to take the next 120 days to determine if an adjustable downtown grid fits with the city’s existing plans.

“I think that taking a baby step forward on this is a good idea,” Morantz said.

He took contention with the mention of the infrastructure being “adjustable” and “temporary,” and said words like “expedite” put him off during Lukes’ presentation.

“Sometimes in our haste we can make mistakes,” he said.

Morantz also expressed concern that the city’s 2015 pedestrian and cycling strategy has “not a word” about adjustable bike paths, and wondered whether Edmonton or Calgary’s did before they went with the adjustable grid plan.

Transportation Manager Luis Escobar cleared it up, explaining each of those cities were in a similar “piecemeal” development mode as Winnipeg, building bike networks out during road renewal as per their respective plans before realizing the approach is “not an actual concerted effort to build a cycling network.”

Those cities, like Winnipeg, were years from having a gapless transportation network for cyclists that is both safe and convenient.

“So what they did is they (installed) something to fill in that space in-between,” Escobar said.

Also, to dissuade fears that Lukes’ idea could in any way defy the existing cycling strategy, Escobar said the department would have to find a way to make the two plans compatible, as it “cannot undermine a policy that has been adopted.”

It’s a choice, she says, between taking a decade to have a safe cycling network downtown, or having one by 2018 “for a fraction of the cost.”

She contends her preferred method is a “new innovative approach” the consultants who developed Winnipeg’s active transportation plan simply hadn’t considered or weren’t familiar with at the time.

“Technology and innovation in (the active transportation field) is constantly evolving,” she said. “It used to be just painted lines with sharrows, but we realized people weren’t getting out… this is a very evolving field.”

Lukes said the motion that replaced her own is a “delay tactic,” but only a minor set-back.

She explained how, leading up to the IRPW meeting, she learned there is “tremendous demand” for the downtown grid, and she believes pushing it back means “people’s safety is put on the line,” so she’ll be working to make it happen.