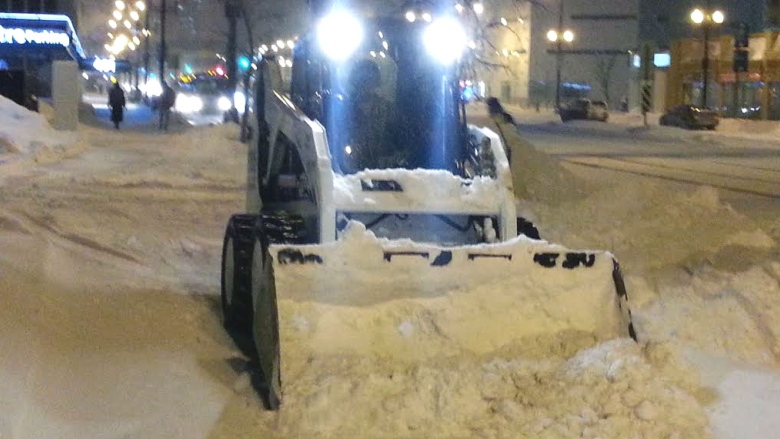 Last year, I requested that Public Works investigate options to improve snow removal on the active transportation network, and they will be bringing forward recommendations mid-March.  For more information, please check out my Special Snow Bulletin, which provides an overview of the clean-up from the record snowfall received in late 2016.

My thanks to Metro Winnipeg for reporting on the City’s continuing efforts to clear away our record snowfall.

Is there any political will to fix the ‘weak link’ in Winnipeg’s snow clearing?

The catch? Bowman says it all depends on how much it might cost, which he doesn’t know given the fact that information is contained in a report on winter maintenance that will be reviewed this spring.

That makes his initial comment all well and good, but Winnipeggers frustrated with the city’s snow clearing efforts shouldn’t expect big changes for winter 2018 – an election year, let’s remember.

So whether the city can afford to pay for bike lanes, sidewalks and trails to be cleared faster and more thoroughly needs to be weighed against the question: Can it not?

That means each year, councillors will funnel a pretty chunk of cash into building new bike lanes and walkways in order to make moving around our city easier and more enjoyable.

In 2016 alone, the city spent about $6 million improving our active transportation infrastructure and recently approved $5.7 million more spending this year.

In the next six years, the city will spend $32.7 million on building more walk- and bike-friendly amenities.

So what happens when this infrastructure sits buried under windrows and piles of snow for weeks and months at a time each year?

To be fair, this criticism is not just aimed at the city’s ongoing cleanup from the three recent back-to-back storms that left major sidewalks, let alone smaller pathways, blanketed in mountains of snow.

Coun. Janice Lukes says active transportation has long been a “weak link” to what she otherwise calls a top-notch snow clearing service.

She says policies around how routes are plowed and prioritized need an update given how much new infrastructure has been added to the city’s network over the past decade.

Just ask any cyclist how much they enjoy using bike lanes on an average winter day.

You might hear a similar reply from pedestrians who must navigate impassable sidewalks or anyone who wants to take a walk in the park on a wintry day. Meanwhile, the streets are mostly clear.

This value for money argument isn’t lost on Bowman.

Besides increasing the city’s stock of active transportation routes, the city is repairing million of dollars worth of roads and sidewalks annually, he says.

“We want to make sure that we’re getting the value for those investments the best we can,” Bowman said.

But like anything in life, Lukes says, doing a more detailed job will cost more.

Before too long, Bowman will have to decide whether to put his money where his mouth is when it comes to snow clearing, or just close the door on the idea altogether.

‘I can’t see how we salvage this winter’: Snowy sidewalks too far gone, advocate says

It snowed, snowed again, and now it’s snowing more, exposing a stark dichotomy between the maintenance of Winnipeg’s roads and its sidewalks.

It was one of the snowiest Decembers on record, to be fair, but while many roads are cleared, sanded and navigable, sidewalks next to them are hilly, snowy and impassable.

For anyone navigating by car, snowfall can be a blip of a burden as roads get messy and parking restrictions tighten up, but the city’s response is instant and eventually, satisfactory (almost all routes are passable in relatively short order).

But for people who walk, bike, bus, or use any combination of active transportation (AT) means to get around, the cumulative effect of snow on snow on snow—combined with maintenance crews’ adherence to city policy, which ties sidewalks to road clearing priority—is essentially the end of easy passage.

“I can’t see how we can salvage this winter,” lamented Jamie Hilland of the Green Action Centre. “You’ll see (people) forced to walk on roadways because we prioritize vehicle travel over people walking.”

Hilland, who has led a walking school bus of kids clambering over sketchy, snowy sidewalks for eight years in Winnipeg said he can look at the streets and pathways and see when peak-winter has rendered AT a difficult-to-impractical choice.

Hilland explained that for cyclists, children, the elderly, or anyone with mobility challenges the rest of this winter will be a “tough slog.”

“Right now a lot of them are homebound,” he said, adding that aside from resorting to driving, many AT fans have “no recourse.”

As the city encourages active living, and spends millions on bike lanes and transit, Hilland said the poor maintenance is “a disservice to the investment.”

Public works department spokesperson Ken Allen said it might look like roads are top priority because they get the “rapid response” of plows during snow events, but clearing sidewalks and trails remains high on the list.

He explained truck plows are dispatched as soon as the flakes start flying, and within hours the volume of snow pushed from roads during back-to-back quick responses means “snow storage on boulevards is at a premium.”

That kind of “heavy accumulation” means the city has to use burly, precise snow blowers instead of plows—they’re better suited to move frozen snow to the little boulevard space remaining.

Unfortunately Allen, who drove plows and blowers around the city for 16 years, said it’s simply the “nature of the beast” that the blowers make for a “much slower process.”

And because even cleared sidewalks get fresh snow or spillage, the city also has to backtrack and loses progress.

“We’ve been clearing sidewalks since the first snow event in December… it’s an ongoing process,” Allen said. “We clear them as well as we can as quickly as we can, but if we get hit with another snow event it definitely sets us back and causes the snow-clearing operation on sidewalks to take longer.”

Allen said the department is asking “people be patient,” as the crews are “working as quickly as they can,” noting when it comes down to how the work gets done, they’re just following “the council-approved policy.”

Hilland said that policy is the sticking point, and he hopes it will get updated in the spring when a report on AT winter maintenance comes before the infrastructure and public works committee.

Rather than clearing sidewalks along with the priority of road they are adjacent to, Hilland would like to see a study identify unique priority for the busiest cycling and pedestrian routes.

“We should be clearing those first, just the same as what we do with roadways,” Hilland said. “I know we have limited resources, limited budgets, but I think we can do a better job in terms of prioritizing busy cycling and pedestrian corridors.

“That just makes more sense for me, because the present policy isn’t working.”