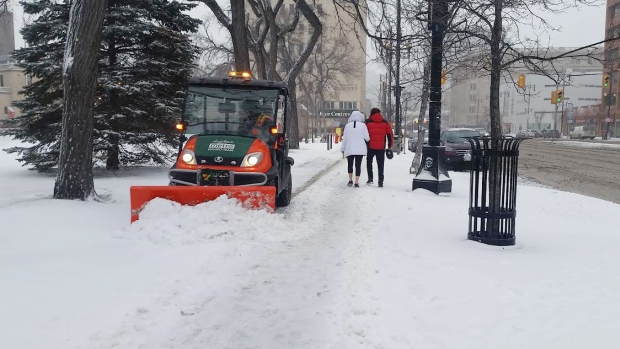 This has been a long drawn out process, here is the latest update (Dec 2019)

As per my motion in March 2016 (Item #24) to improve snow and ice removal on sidewalks and pathways  – a report was finally produced almost two years later – in May 2018 (Item # 7) providing the costs and routing:

The next step required to improve snow and ice removal on sidewalks and pathways is to secure funding. This will only occur in the 2019 budget process:

I encourage you to contact the  Budget Working Group  and ask that they include the $1M in the 2019 Budget.

I’m pleased to have initiated this very significant change in the snow removal policy.

In May of 2018, after two years of review, discussions and more reviews, the Standing Policy Committee on Infrastructure Renewal and Public Works concurred in the recommendation of the Winnipeg Public Service, and recommended to Council (which Council approved on June 21, 2018):

What this translates out to is:

In March 2016, I requested the City’s Public Works department to review the current snow and ice removal policy for sidewalks and pathways and provide recommendations on how to improve it.

The report has been delayed now FIVE times and is expected to be presented in February 2018, TWO YEARS after I originally requested the study.

I am confident the Public Works department has had more than adequate time to review this matter and develop a plan and budget to improve snow and ice removal on sidewalks and pathways.

I do not fault the department.

The Mayor has the final say in what reports appear on the agenda. This report is not coming forward with cost estimates because  of a decision by the Mayor. Clearly, improving snow and ice removal on sidewalks and pathways is not a priority for the Mayor and his Executive Policy Committee.

My thanks to CBC News for reporting on this issue.

Coun. Janice Lukes still waiting for information she asked for in March 2016

Photo:  Winnipeg city Coun. Janice Lukes is still waiting for a report she asked for in March 2016 on how the city can improve snow clearing on sidewalks and pathways. (Darren Bernhardt/CBC)

A Winnipeg city councillor is fed up with how long it’s taking city officials to respond to a request she made more than 1½ years ago for information on ways the city can improve how snow and ice is removed from sidewalks and pathways.

South Winnipeg-St. Norbert Coun. Janice Lukes made the motion in March 2016, when she was chair of the city’s public works committee. The motion asked the public works and transit departments to meet with stakeholders to work out a strategy to improve the service, and to report back with how much those changes would cost.

Lukes said the groups have since met but she’s still waiting to hear about the details from city staff.

“They haven’t come back with answers,” she said. “It didn’t ask them to go out and do it. It just said let’s study it; let’s find out if there’s cost implications, bring it back to the committee and then we could go from there.

Lukes said city staff have asked for an extension from the public works committee several times since she made the motion, and she was frustrated to see it come up again on the agenda for the committee’s meeting Tuesday, once again with no report attached.

“The public works department will come forward and say they need another 30 or 60 days, or 120 days, who knows.”

The task of clearing sidewalks is currently handled by the same contractors hired to clean the regional street they run along, Lukes said. She thinks having two separate crews — one for streets and another for sidewalks and the city’s active transportation networks — might be a solution.

And with snow removal contracts coming up for renewal next year, she thinks now is the time for the city to start looking at making changes.

While navigating uncleared sidewalks can be tricky for everyone, it’s especially difficult for Winnipeggers living with disabilities, said Allen Mankewich, who uses a wheelchair and is an advocate for people living with mobility challenges.

The city can do a better job clearing snow and ice from sidewalks and pathways, he said.

“We had some pretty big dumps last year and after those snowfalls, it was pretty difficult to get around. Even after they’d cleared it, there was still some narrow passageways where they didn’t clear it wide enough and it still made it difficult to get around,” he said. “We live in a winter climate and I think we have to accept that and put some resources into making our city more livable during the wintertime.”

Mankewich said he lives and works downtown because downtown streets are a priority, meaning they’ll be cleared sooner, but he has lived in the suburbs, where the sidewalks are cleared less regularly and not as quickly after major snowfalls, he said.

Lukes said the city has already increased and improved snow removal from sidewalks around schools, and she wants to find a way to expand that level of service to other areas of the city, including the suburbs, especially around community centres and seniors homes.

Connie Newman, executive director of the Manitoba Association of Senior Centres, said poor sidewalk conditions in winter leave seniors with two options — getting out and risking a fall or staying cramped up inside their homes until the thaw.

“When you get stuck in your house because the public sidewalk is too slippery to walk on, what are we doing to the citizens?” she asked.

Newman is just as frustrated as Lukes by what she sees as a lack of action on the issue by city staff.

“The conditions of our sidewalks in lots of places in this city leave a lot be desired when it comes to safe and stable walking, no matter how old you are,” she said. “To have a motion from last March still not dealt with, I have a problem with that.”

City spokesperson Lisa Fraser said the report is still being worked on, and will be given to council “in the new year.”

“The City is always looking at innovative ways of delivering services,” she said. “As part of the review all aspects of snow clearing will be considered.”

Fraser noted that in 2008, Winnipeg won the American Public Works Association (APWA) Award of Excellence for snow and ice control.