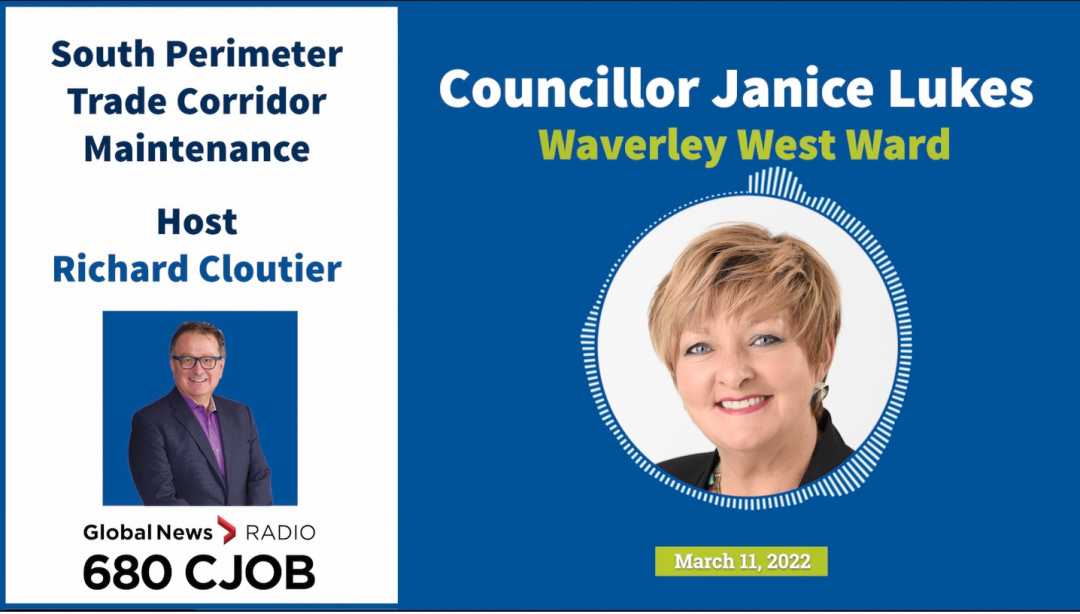 Thank you to CJOB and Richard Cloutier for continuing to cover the lack of maintenance issue on the south Perimeter. Until structural upgrades are made – we must ensure strong ‘band aids’ are put in place to ensure optimum safety on this trade corridor.

I encourage you to contact your MLA and share your concerns about maintenance and the resulting decrease in safety on the South Perimeter. Links to MLA’s contact information are provided in this posting. Listen to a recent interview with Richard Cloutier.

Please use extreme caution when you drive on the South Perimeter Highway – at any time of year.  Many residents use the South Perimeter to access Pembina Highway, Kenaston Rd, St Mary’s and St Anne’s Road.  The Perimeter Highway is managed and maintained by the Province of Manitoba. I could say ‘in my opinion’ but – the facts are – maintenance of the south Perimeter has been dramatically reduced since 2012.  Every government has cut maintenance staffing, mechanical staffing (to repair broken maintenance equipment) and reduced the number of pieces of equipment required to property maintain the highway over the years.  There have been six different Deputy Ministers in the Department Transportation and Infrastructure. That in itself is a problem.  According to data from the Manitoba Trucking Association, the busiest section of highway in Manitoba, is the west section of the Perimeter between Pembina Highway and the Portage Ave access to the Trans-Canada Highway.

The lack of maintenance is extremely concerning as it impacts safety. I am working directly with the Provincial MLA’s whose residents use the South Perimeter to highlight the maintenance concerns I and many residents have (MLAs Guillemard, Reyes, Smith, Pedersen and Minister Piwniuk). To the Provincial government’s credit, they recently completed a review of the South Perimeter and have identified short term infrastructure requirements to improve safety; removal of the Brady Rd turn lane has occurred, removal of many turn lanes from service roads has occurred, upgrades to St Mary’s Road intersection is starting this year (2022). These are tremendous steps forward in ensuring greater safety on this national trade corridor BUT – until the highway has additional structural upgrades, maintenance must remain a top priority.

This winter we experienced extreme volumes of snow, which amplified the lack of maintenance.  Again, here is a brief overview of what occurs on the South Perimeter

I will update you as I learn more.