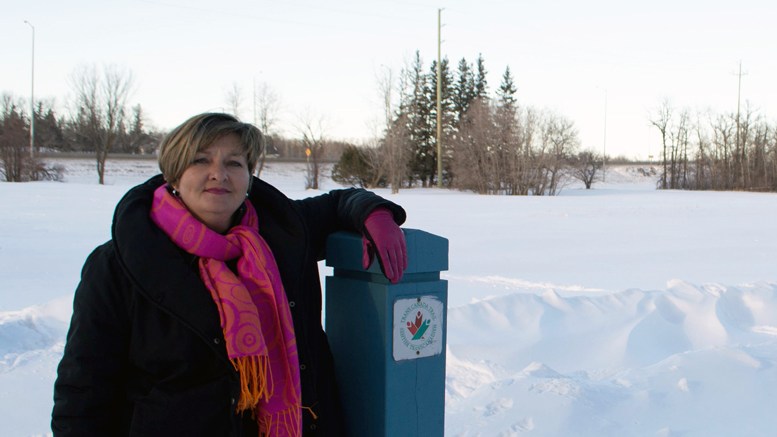 Thanks to The Manitoban – The Official University of Manitoba Students’ Newspaper for always having sustainable transportation issues at heart!

Always a pleasure to spend time with students!

The Manitoban – The Official University of Manitoba Students’ Newspaper
By Osho Samuel Adetunji on March 2, 2016     Photo by Chantal Zdan

In the face of persistent transportation challenges in Winnipeg, South Winnipeg-St. Norbert Coun. Janice Lukes is listening as the city’s residents sound off through a series of public consultations this winter and into the spring.

The series of so-called “transportation conversations” began with its first meeting at the Forks Market in January. The meeting focused on the issues of snow removal and active transportation in Winnipeg. The second meeting, held on Feb. 18, focused on transit and rapid transit in the city.

Coun. Lukes, who serves as the chair of the standing policy committee on infrastructure renewal and public works, said she was prompted to engage with the public on transportation because it is imperative to get the opinion of transit riders, cyclists, motorists, and pedestrians on planned projects.

“That is important to me, to hear the unfiltered truth – that is one of the things that prompted the series.”

Lukes told the Manitoban that she has made significant progress on planning issues as a result of the responses from the transportation conversation series with respect to the challenges faced by city residents.

“Every topic has its champions,” she said.

Transportation challenges at the U of M

Orly Linovski, an assistant professor in the department of city planning at the U of M, received funding from the Social Sciences and Humanities Research Council last September for a research project on bus rapid transit in medium-sized cities, including Winnipeg.

Linovski told the Manitoban there are several transportation challenges peculiar to students at the University of Manitoba, such as the low frequency of buses outside of the usual rush hour periods.

“One of the challenges is providing reliable service beyond the 9 a.m. to 5 p.m. work hours, so students can be on campus throughout the day,” Linovski said.

“And it is probably an issue for many students in terms of the frequency of transportation after the rush hour and also for students that live outside central Winnipeg, connections are often very difficult.”

According to Linovski, the university has a key role to play in ensuring that subsidies for faculty members who own cars do not become disproportionate incentives for car ownership.

“The university always has a role. I mean, one of the current issues is that the two faculty parking passes are cheaper than two bus passes and so we subsidize parking but we don’t subsidize transit in the same way for faculty and staff,” she said.

“Extending the transit program to include people that don’t want to drive […] as well as people that are using other means of transportation will be a strong step in the right direction.”

According to active transportation proponents, there are also barriers for students, faculty, and staff who wish to commute using active options like biking.

“Three main challenges are distance, risk of theft, and adverse conditions,” said Anders Annell, co-ordinator of U of M Recycling and Environment Group, in an email.

“Most of the routes that commuter cyclists choose have worse surface conditions in winter than the spaces used by cars and buses; think of the outside edge of the curb lane compared to any other lane, or how difficult the sidewalks can become for pedestrians and cyclists.”

Taking it a step further, Ian Hall, director of the office of sustainability, said that the transportation challenges at the U of M are similar to those being encountered at other big locations in the city.

“As a major institution that draws tens of thousands of students, staff and visitors every day, our campuses have many of the same transportation challenges that other destinations do: large peak-time demands, coping with weather, offering transportation choices that keep pace with what our community wants, and maintaining and updating the infrastructure that enables access to our facilities,” Hall said in an email.

Hall stated that the office of sustainability organizes events like Commuter Challenge, Bike to Work Day and the Jack Frost Challenge at different months of the year to encourage environmentally friendly transportation options at the U of M.

He added that the results of a recent campus commuter survey carried out in January will be used for planning the university’s sustainable transportation strategy.

“Later in 2016, the office of sustainability will be using the results of the survey as a key input for a sustainable transportation strategy. Community input into this strategy will be invited next fall, but input is welcomed at any time,” Hall said.

Annell, who is also a fourth-year environmental science student at the U of M, added that the city can help make biking more realistic for students.

“The city could solve a few key gaps in the cycling route network. Most cyclists will tell you that the most dangerous part of their commute, or the part they avoid, is a bridge or underpass,” he said.

“While we have been fortunate to see many premium cycling routes spring up around the Fort Garry campus […] the gaps leave cyclists to choose safety or speed.”